Ok, by now most of the things have been done or rather, done me in.

My Dad decided to fetch my sister and since they're too tired to go anywhere, they decided to come home straight away. And Kristine has the pleasure of meeting her Auntie for the first time. I know she loves her to bits, but wait until Kristine starts leaking biological stuff........

Anyway, by 2PM, I have rushed down to SS2 to purchase the new Mobile Phones (Nokia 3120 for my Dad and Sony Ericsson T630 for myself). I have made the call earlier to Angie, who did her best to get me a White T630 but only the Black was in stock. Funny thing was, SS2 is usually a busy place and by the time I went there, it was like a Ghost Town.

Anyway, Angie is a very very good salesperson. We got on great like good old friends who have not seen each other since the previous life. She inconspicously and tactfully controlled the conversation the whole time, making you confortable and in no hurry to make any silly decisions. Which is great because at that time, there were a few other customers all peering at phones and at my purchase, which I really felt uncomfortable. Suffice to say, in the end, I got the phones, a protective zipped condom for my Dad's Nokia and also a Bluetooth headset, all for RM1360. I have to come back next week for my own condom.

So, why did I chose the T630? The history of my Mobile Phone ownership went like this:

The rest of the afternoon was spent locked in the room preparing both phones for the night. I got the T630 to dial from the iPaq's Address Book but I can't pair the headset because the instructions said "Switch on sequentially" which gave as much clue as looking for the lost City of Quoazocotl (Note: There is no such place). Still, the SE T630 did not disappoint me much as I never did have any high expectations. All I wanted was a colour phone, with nice ringtones and most importantly, a Bluetooth connectivity. Anyway, my Dad's SIM card is ready, the Nokia 3120 is ready, I just can't wait to see the look on his face during dinner tonight......... 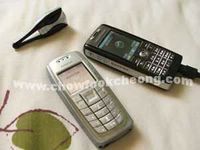 The Nokia 3120, the Sony-Ericsson T630 and the Bluetooth headset 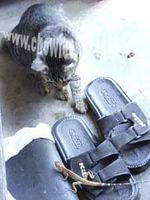 We thought the Lizard was dead and so did the cat. No until I move the slippers...
Date: Tuesday, February 08, 2005 No comments: Links to this post

Its going to be hectic. That's all I can say.

I was going to (or should be) clean the house yesterday afternoon after visiting a few more customers. But instead, I slept like a Pig, after promising my Wife I would only take a short nap. Nothing could even wake me up, even when SOMEONE tried to call me on my Mobile. Oink oink.

Yesterday was quite tiring for me because:
1) 2 our of 3 customers were closed for the Holidays, so I snuck past the guard and installed the phone
2) The first customer was open and I had a nightmare because a cute ex-staff was there (Think of a sweet little girl elfish smiling at you with a stabbing knife in her hand) and their maintenance guy was asking a lot of questions about the system and not really understanding my answer, depite my using of layman terms and sign languages
3) Then I rushed to Celcom and had another three events:
a) Met another ex-staff who asked me why GirlA did not invite me to her Wedding (because we were not so steady and it was for CLOSE friends only)
b) My brother's and my Wife's supplementary schemes were obsolete so I had to upgrade all our talk plans to Ezy, which meant signing and filling a lot of forms. Sign...sign...sign...
c) Just as I was about to leave, my friend called me and said his Dad lost his phone and he could not call Celcom (from his Maxis line), so I went back and gave my phone to the lady at the counter (whose looks could kill a Wild Board) to talk to my friend.
d) The SIM card number I chose for my Dad would have cost me RM500, so I had to decide on another lest conspicious number...........
4) I wanted to pick up the MacFarlane Robocop action figure which I had booked but they were closed for the New Year.


Anyway, right after this, I need to:

And the schedule for the day is even better. I will have to fetch her from Puduraya and then take her to Low Yatt for some computer related shopping (which I can guess, would bt 80% shut) and then straight to our reunion dinner. All in one afternoon.

But on the bright side, at least I can go search for some handphones which I can give to my Dad. 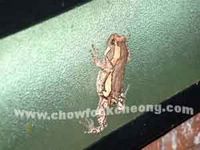