MixFM's Living in a Box

While I was at CineLeisure, I went to The Curve to get some cash so that I can get a thumbdrive for my Wife and also to pay for the day's parking. As I sauntered to the middle court, there was some noise which caught my attention. Apparently, it was MixFM/CIMB's "Living in a Box" contest. Luckily, that "noise" was not a MixFM DJ because he was so boring, he can't even draw a respectable crowd.

When I was there, the contestants were in the middle of a somthing and not being able to follow the events, from a third person's viewpoint, the contest was boring, and it looked as if the Judges were undecided nor do they have any experience. Anyway, 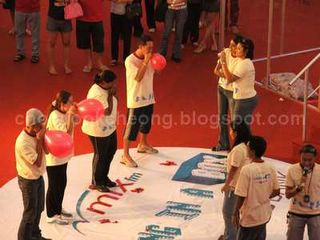 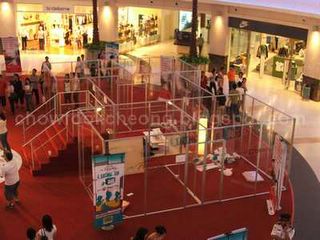 Which you share in a glass house for seven days 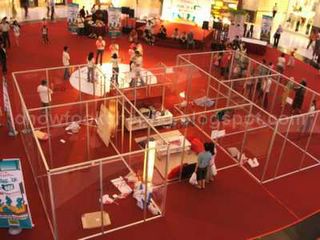 Four rooms and a common lounge with nothing but
a PC and some big pillows. Whether you shit, eat or
wank, everyone can see you. And you have to
apply for a week's leave. All this just to win a
RM50,000 prize. Stupid
Date: Saturday, November 04, 2006 1 comment: Links to this post

How to make a prop in three days

Well, two days, really. Because I bloody ran out of time!

Remember the plastic toy fan I got a few days ago? I decided to make it into something that looks like a scanner from a Sci-Fi movie/TV show.

DAY ONE
Took the fan apart, looked at the spaces inside so that I can determine how much electronics I can put it. Not much, in fact. There is only enough space for a set of LEDs and a microprocessor. So, traditional off-the-shelf electronic chips are out of the question. Moreover, Pasar Road does not open at mid-night 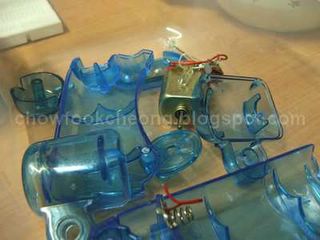 See all the pieces? I had to store them in a box because
Kristine likes to take stuff from my table while I am
away at work

So, once I got the idea on which lighting sequence to use for the LEDs, the idea is set. It is convenient to use a micorprocessor to do this because I can try out a few lighting sequence before deciding on the one I liked. Also, because this microporcessor has its own internal clock, I can further minimise all the electronics to just a few items: 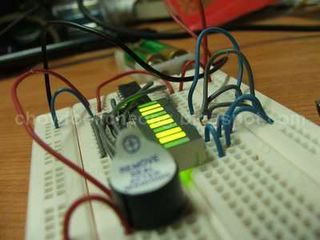 There you go! This is the prototype board I use.
The LEDs are moving towards you as if you're
collecting data. At the same time, you have a
beeping sound to make the prop more
(dis)functional 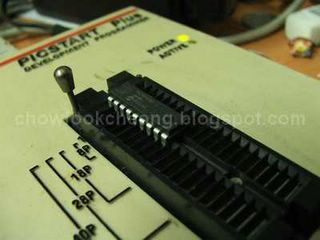 Once I am happy with the sequence, I program
them into the microprocessor chip
DAY TWO
It took me six hours to wire up all the stuff and also put it inside the small casing. It was not wasy because the thin fragile wires would break or I have to resolder them again, etc. Because its so small, I did not use any circuit boards but rather, solder them wire by wire. I have to be careful so as to not short-circuit anything. I could have used those small SMT chips but they are expensive and also time-consuming as delivery could take weeks. So, for a last minute prop, these would suffice. 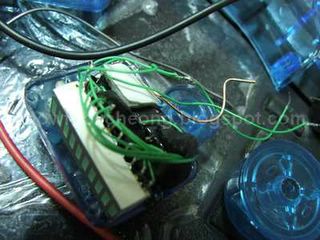 Sometimes, I wished my fingers are as small as Kristine's 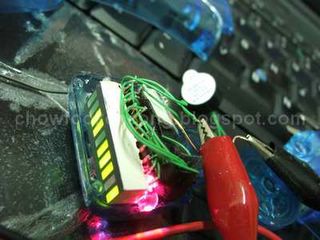 Power it up and its good to go!
OK, here is a short video clip of it in action. If I had another day, I would have painted it. But instead, the only thing I could do at the moment is to cut two strips of rubber foam and stick it to the sides. Ha ha ha ha
Date: Saturday, November 04, 2006 No comments: Links to this post

Today is was the day I had to go up North to Sitiawan to oversee a PABX installation. Although this system was not sold by us (which by right, should be), we still went ahead to make sure that the installation proceeded without any hiccups because after the hand-over, we are expected to maintain it.

The party responsible who got this system was shaking their heads in total frustrations due to so many changes in the plans until the Main Distributor refused to service them anymore. This was because the site was quite far away from branch their office (about 88Km?) which means increased expenses to send a technician there. So, we decided to do them a favour and came up instead as we're nearer to them (about 170Km, ha ha ha ha ha!)

Anyway, with the job done within hours, I was free to go home and be ready to attend for tomorrow's event. 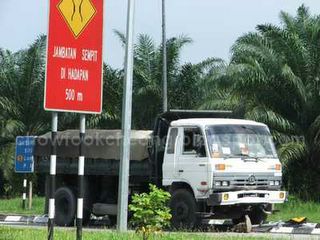 This lorry was stuck in the middle of the road 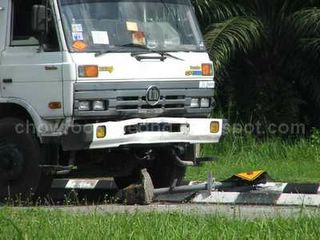 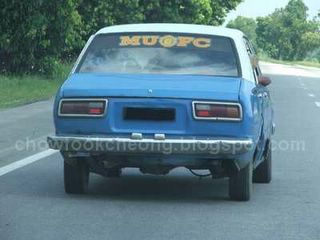 Trust me. This car is actually going straight 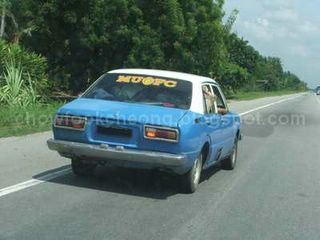 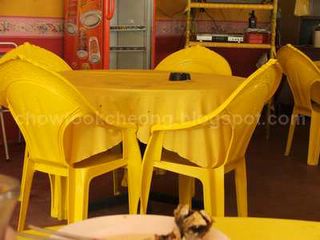 During lunch, we saw a new kind of plastic chair 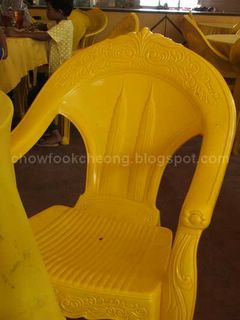 Which looked more like it was taken from
a Sultan's Palace. The two middle corncobs
are actually Petronas Twin Tower
Date: Saturday, November 04, 2006 No comments: Links to this post