For the weekend, the girls's (one of the) favourite has Auntie come back to stay. And so, as a treat, we all went to a buffet steamboat at Yuen's. Yeah, this is the only place where everyone goes and you have to make phone booking if you want to get a table instead of waiting in the queue. Since the girls were sleeping when it was time to go, we had to go in separate cars. Although it was told that Eason Chan was going to appear at Sunway Pyramid, the jam was a bit heavier than usual but no enough to make us late (by an hour or so, ha ha ha ha) 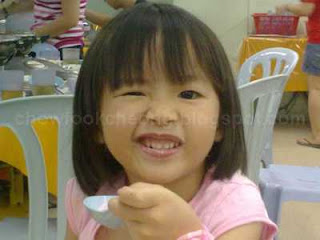 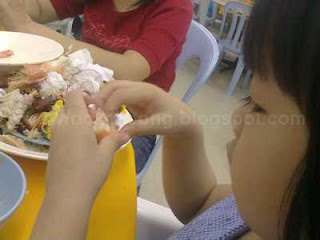 Kaelynn did not bother much and kept on eating.
She loves prawns and like me, are a bit allergic to
them afterwards, as in going itchy all over. This is one of the props which made Stephen Chow's
"GOD of Cookery". The "Lau Liu Har" I don't know
what's' it called in English. Still this is one of Wifey's
favourites. For me, after taking from the tray for
her, its all so wriggly, I just lost the appetite for it.
But there is a place in Klang where they fry them
with mee-hoon and it was delicious. Teluk Gong, if
I am not mistaken. But now, the place has changed
so much, I can't recognise the correct shop anymore 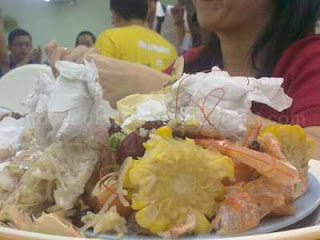 The leftovers made from Wif...er, us 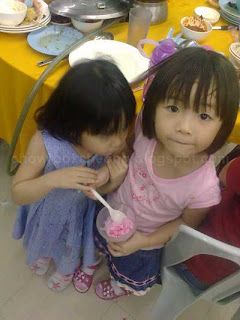 Halfway through, the girls decided
to go for Ice-creams instead. 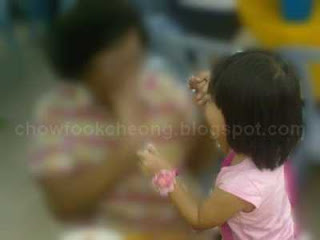 The passing of a great person

Ever feel like all the roller-coaster rides, the fun stuff and the sweet candies and food you had for days suddenly came to a stop and you felt you have been cheated? Ever realised that those rewards you had were the Consolation prize whereas the real one was given to another person?

This was how I felt yesterday. (Its the feeling and nothing about the prizes)

Because after nine months of Leukemia, my friend's Mom passed away. I was OK until it was time to attend the funeral. Seeing his father for the first time in so many years, it was quite a shock. He has grown so thin, almost like POW. And it was sad because they have sold their family house after my friend got married and moved out. They got a smaller house for the both of them since their children have all moved out. And in less than a month after moving in, she was gone. Now, he will be all alone.

Back when we were young, his Dad was a very strong minded person and his Mom was the pillar of strength supporting all of them. His Dad would keep on pushing him, to strive for the best, study hard and so on. And his Dad really, really worked hard. And his Mom would always be there, advising him and encouraging him. As for his sister, well, she was a girl anyway, in a traditional environment. It was so hard to imagine all this after seeing her for the last time.

And for the rest of the evening, my mind was in a loop, back to the times when were all young kids, nothing to fear and with the knowledge our parents would bail us out.

Now, we are all grown up and in time, re will replace their positions too.

Damn. I should have keep in touch with them more often. Especially now.

So many things I did not know. And so many details they do not know.
Date: Saturday, July 04, 2009 No comments: Links to this post

Still being numb this morning, as I was walking to the restaurant for a take-away Nasi Lemak I was really not in the mood for my usual breakfast. This restaurant was quite near to the office and they have started a new Nasi Lemak stall which offers quite a lot for just RM3.00 or so. Anyway, on my way there, this stupid crockcroach rushed towards me.

I was a bit surprised and since I do not wish to kill it, I used my shoes to kick-sweep (sort of like, using the shoes to lift it, then flick it away from my oath, la) it away. And it landed on its back, its legs in the air struggling, as if it was riding a three-wheel air bicycle. 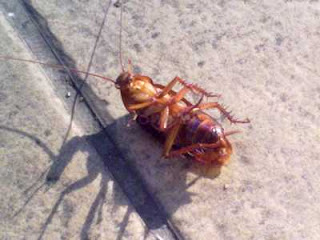 Minutes later, when I came back, it was still
struggling. Whatever happened to the old
crockcroaches who can just turn itself back?
Sigh. These new Generations......
Date: Saturday, July 04, 2009 1 comment: Links to this post