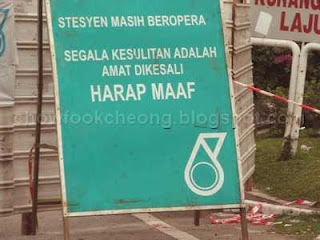 Yep. The station's still doing it, and they even
apologised for it

Trip down South Part I

So, I am going down South again. Or more specifically, WE are going down South again. This time, there are four sites to visit. One in Melaka, one in PTP (Pelabuhan Tanjung Pelepas), one in the heart of Johore Bahru and another nearby. The sequence of which customer to visit first was actually arranged en route to the main object to this trip: To install a Toshiba PABX.

So, we set off about eleven in the morning and by the time we reached our first customer, it was in the afternoon. With that over, we continued onwards to the second customer, who is located in the heart of the city. Since we were required to install a Toshiba system there, we had only about less than a day's work cut out for us. After unloading all the tools and the PABX, we started work straight away. Our main object is to just install the Toshiba PABX since the cabling has already been done. Initially, the customer did invite us to to the cabling but due to logistics and labour issues, we could not commit. Therefore, the customer had no choice but to get a local cabling company to do the job. But in the end, we ended up not only installing the PABX but also rectifying the cabling contractor's errors on all phone and network points. If it wasn't for that, we could have finished the job at ten at night instead of one thirty in the morning. 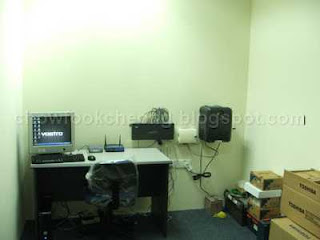 At eight in the evening, we're nearly there. We even helped
in setting up all the LAN although the ADSL was a 2Mb
line, I did not get the chance to surf the Internet. Hee hee 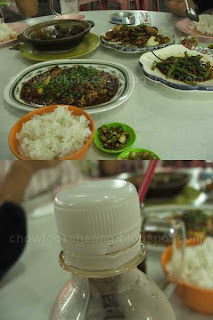 Dinner was across the road, and although the
meals were small, they weer quite delicious.
But I was more interested in their bottled
drink as its a clear indication that it has
been recycled too many times At 11th floor, there is a beautiful swimming pool
and this is the night view from the Hotel room 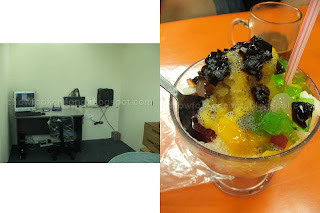 At one in the morning, we have finished and as a reward,
I get to order this Rm1.90 Mango Ice Shaving.
Yeah, tasted like shit. Never ever put processed
coconut chunks and mix it into the ice. This is a
typical franchise drink where, I guess, you just
pour stuff from a packet and mix it with the ice
Date: Friday, November 02, 2007 No comments: Links to this post