While rummaging my stuff the other day at the other house, I came across this model which I have forgotten so long ago. And I also forgot where (Miniature Hobby in 1Utama) and why I bought it (too much cash as a single Engineer). Its a very simple model, where you just snap in all the parts and close the two halves together to get a sinkable submarine......

OK, I also forgot why I wanted to have LEDs fitted into the model too. But revisiting this model ten years later, it was so embarrassing. Sort of like you suddenly saw your own photos in the 80's, wearing THOSE hairstyles and clothes. Maybe it was the timing or coincidence but this model did alert me to a few things:

1) The LED technology at that time and also at Pasar Road was still in its infancy. These LEDs were dim by today's standards. So, I will have to redo the lighting and this time, use White LEDs, something which does not exist at that time.

2) The wiring is the same as Kal's recent project. All the LEDs were soldered in paralled and I forgot what voltage I wanted to put in there, most probably 5 volts as opposed to the 1.5 volts which was not enough at all.

3) I still suck at modelling. 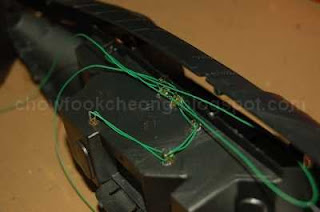 These green wires were my favourite. Its actually
called wire-wrapping wires and it costs a bomb.
Also, its damn fragile too and you cannot just use
a blade/cutter to shear off the plastic sheath but
to melt it away. The cutters would "encourage"
the thin wires to snap off when you least expect it 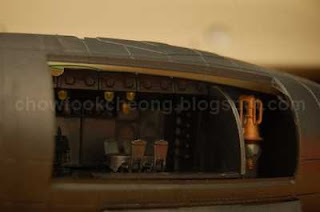 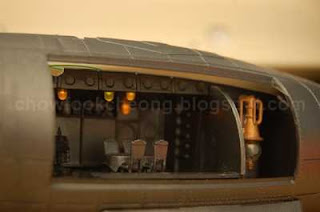 Then I pumped in 15mA and the lighting got better 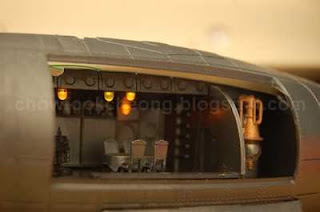 At the maximum of 150mA, it was ideal. But here, if you
look at the LEDs, their lens are clouded and so, does not
give a spotlight effect. I might have to change that and
mix clear LEDs into it. This also means re-doing the
interior ceiling. 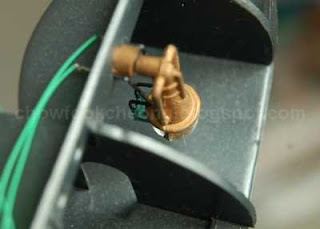 The LEDs are so old that even its lefs (black) have oxidised.
And this particular square LED does not light up anymore
and so, the mysterious power supply orb is not supplying
any power.......
Well, one day, when I have the time, I will definitely get this model done. Its just the lighting that I am not pleased with and I so wanted to motorised the propeller too. This model did not come from any 20,000 Leagues movie to show, if I recall correctly and thus, no reference photos of the model.

Which also means, I have total artistic freedom in doing this model with some 1/100 scale figures. Maybe I will build some extra rooms since the other side of the model is completely empty and you cannot see much from the view port as well. Perhaps a room where they steer this fine vessel. Or maybe a crew quarters with very "active" crews. Ha ha ha ha.
Date: Sunday, June 28, 2009 No comments: Links to this post 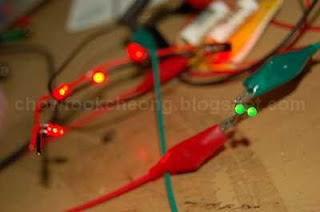 OK. I have hit into a snag. After seeing the original item, I have doubts as how its going to be lit with just a 1.5volt battery. Perhaps there is something missing here. The problem is this:

Let's say each LED takes 0.025A or current and since there are five LEDs in there, wired in parallel, the total current consumed would be 0.1A. And by my calculations, I don't even need a current limiting resistor to do anything. Either that or the 1.5 volt battery I have is exhausted. Man, sometimes I really want to kick myself for not getting that RM400.00 adjustable power supply. But that's another story.

Anyway, once its ready, I wll give you a shout and let you try. Unfortunately, I had to use thicker cables since the more flexible thinner cables were being sold for about RM35 per roll (instead of per meter) and this would mean RM70 down the drain. But don't go connecting the green LEDs yet, OK? 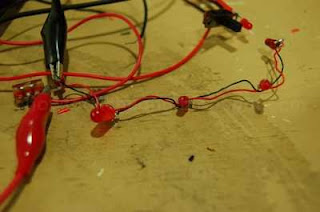 OK, this is the original circuit and if I slot in a normal
1.5volt "N" sized battery (a half-sized AA battery la)
the LEDs were so dim, even you could barely see the
glow. But using a multimeter to pump in 15mA, the
LEDs were glowing moderately bright. So, this means
the "N" seized 1.5 volt battery or any other 1.5 volt
batteries cannot be used since the red LEDs needs a
minimum of 1.82 volts (or so) to light up. 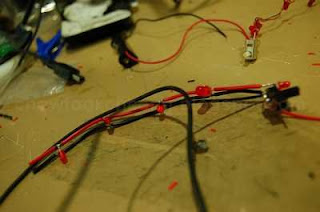 I tried with the new circuit and the result was the same.
I even put in a 1 ohm current limiting resistor bit it still
glowed like a sick LED. Oh, don't get me wrong but
these red LEDs do glow brighter than the original
ones given to me. And so, in conclusion.......... 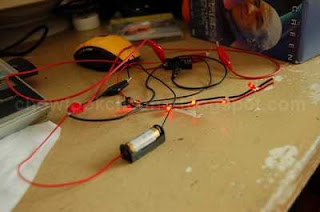 The small battery holder might have been meant for a
12volt 23 (whopping) Ampere battery, the same ones
you use for your car alarm remote. Doing some rough
calculations, 100Ohm resistor would do the job but as
the red LEDs are very bright, I upped the resistance
to 470Ohms, which more or less still gave the LEDs a
nice little glow. How it will affect the green LEDs, well,
we will have to use another set of resistors after all.
Aha! This will certainly throw out all the available
cramped space in there out of the window, of course.
But in the long run, perhaps an actual designed PCB
circuit board might do the trick.

[Update 30062009]
I just found some green LEDs and connected to the whole circuit. Using the initial 470Ohm resistor, the green LEDs were quite dim. So, I reverted back to using the 100Ohm instead and everything looks fine but I worry about the red LEDs being a bit too bright.

OK, I do not like coffee much. I only like them when I am in the mood to like them. I mean, sure, they do taste nice but somehow, its never the same as compared to drinking Nescafe. For one, Nescafe has that strange feeling of leaving you asking yourself, "Did I just drink that Nescafe?" and the oft feeling that the drink felt so thin, as if its flavoured water with sugar added. NEver mind if the latest A mentioned its full of antioxidant. But I just do not really like coffee unless:

1) Its mixed with chocolate (or even durian, yes, it does exist at one time in 1Utama) and ice blended

2) Its from those Chinese restaurant, "Kopi Peng" which is so thick, you suspect they added cornflour

4) Just plain black coffee and bits of sugar, especially on a cold day.

Other than that, for the rest of 24x7x265 days, I cannot bring myself to enjoy it. Sure, occasionally I would mistakenly spit the word, "Nescafe Ais" when I was supposed to order "Limau Ais" but there you go, I still won't like it. Another thing is, compared to Tea, which one sip would turn me into an Owl for the rest of the Night (and morning), Coffee offers me two choices: Stay up slightly later or sleep like a log when I least wanted to do so.

Which comes to this morning's story. A lot of people think I like coffee inclusing myself, sometimes, to which, in actual fact, I do not. While I was mixing my cup of Chek Hup cofferr, Mom came in and saw me doing that. Sometimes, she sees me eating of drinking some stuff and that would just be the slightest excuse to buy them by the container loads which would mean, I have to finish them off. OK, so I exaggerrated but this is also one of the reasons which I would like to have my food and drinks in private, if I can. Since I do not talk much, everyone would assume whatever I ate, would be my favourite............ 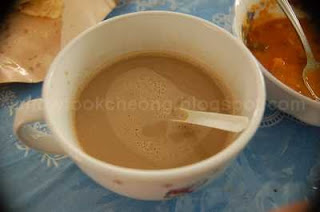 Me: la... la..... la.... la...
Mom [rushed in]: You're making coffee?
Me: Yeah. MY coffee
(as in my own preferred brand, no those dangerously-increase-your-heart-rate green packs of Nescafe Coffee) 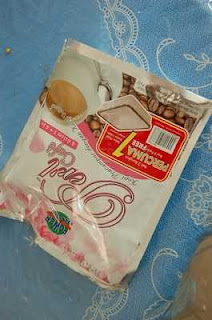 Mom: Here, you should try this. I bought it for you.
I took a look at it. [Hokay. Its pink. And this sets off the testosterone alarm] 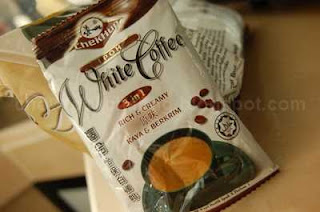 Me: No thanks. I prefer my own brand
Mom: Well try it. Its quite mild 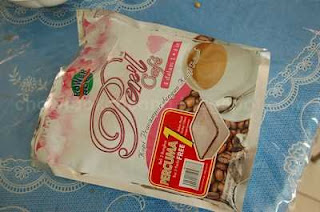 Me: Mild?
Here is where double meaning comes in. Mild as in what? Unfortunately, I could not asked further as my Mom rushed out of the kitchen. So, let's have a closer look at the bag. 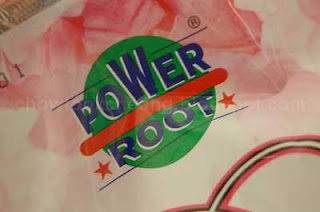 The word, "Power Root" on a pink background is never a good sign. Maybe my Mom is hinting at something. You know. "Power". "Root". Get it? 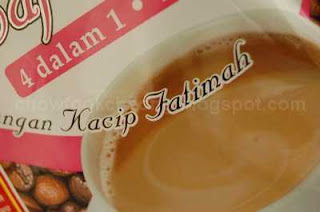 What the.......?
So, is it for me to drink and thus end our family line or for my Wife so we can conquer the World? 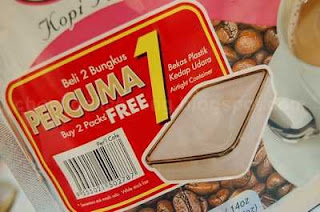