So, its a Sunday afternoon and I have done my chores of washing both cars, the pram, vacuum the carpet, etc. And all the wonderful plans I have planned for today, since Monday, just does not seem "right". With yesterday's heavy rain since this morning, the atmosphere is just plain moody and all I could think of was just the Internet and sleep.

I would have to because when I am bored, a lot of funny ideas crops up and well, you know, "Bored minds & idle hands are a dangerous combination" Hee hee hee hee 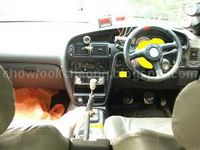 Another Bored & Silly Idea to think about:
I am thinking of installing some LEDs and switches (marked yellow) on the car
But for the steering, I would have to design the plate first

The reason is simple. You do the work, using your own time and efforts and someone else just came is, saw what they liked, copied it and get all the glory. Souns familiar isn't it? This is called "Cut & Paste" or otherwise known as pliagarism, a bad side-effect of the Internet. But very common among Malaysians, from Reports to homework to TV ads. And today, on Newspapers.

Vivian Chew, somehow got Kenny Sia's Photo, removed his watermark and sent it to The Star where she won the RM50 prize for her efforts. If you go over to Kenny Sia's blog, you can compare the two photos that they are the same in the sense that the placement of the motorcycle, the leaf pattens on the bush and the white Proton Saga is the same. Only difference is that the "kennysia.com" watemark is cropped out. And as argued, the only possibility of how Vivian managed to take this shot is that she and Kenny Sia must be standing on the same spot, at the same time and day to take it. 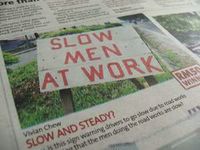 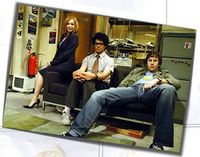 One lives with his Mum, who dresses and styles him, and has the social skills of a serial killer.

The other is a fast food junkie with a spiky personality who must be kept away from normal people.

And they're both under the Line Manager who knows nothing about computers except for double-clicking, hard drives, mice and monitors.

And mix them up altogether in the basement, you have , "The IT Crowd". This is the latest comedy from UK's Channel 4. It depicts the antics of computer geeks in an IT Department albeit a bit exaggerated. I laughed the loudest because (the irony of it) most of the jokes happened to me at one time or the other while I was still an Engineer. Scary, isn't it?

Anyhoo, at their website, you can watch the episodes via streaming. (At the time of writing, its already into episode six but users outside UK cannot watch the streaming videos, so you'd have to find some other way. wink wink).

One of the funniest bit was when Moss tried to put out a Fire by emailing to the Fire Brigade since he had accidentally set the Fire Extinguisher on fire as well.
Date: Sunday, February 26, 2006 No comments: Links to this post

You can always see that in the movies, when there is a padlock on the door or a chest, the Hero would shoot it off (because there are never enough keys in the movies). The lock would then break off and the Hero gets to do whatever things he/she wanted to do. Easy enough, right?

Well, in real life, this is not aways true. Because in real life, things never follows the Movie script. To prove what a gun or a rifle can do, refer to The Box O' Truth. From water to armour vests to doors, you will be enlightened.