Made in Malaysia Mercenary Mandolorians

It was during lunchtime that Kal came over to where I was working and while handing me a project, he told me about the latest happenings at MySciFiFan Forum. This is one of the Forum I lest go to now, due to the fact that it has more cobwebs than a deserted room. But the latest incident brought out many members.

The incident that started it all was some over-enthusiastic guy who built some Mandalorian costume out of some very questionable material and artistic liberties. And he's causing "havoc" up North at USM (Universiti Sains Malaysia), Tunas Saintis at MARA and some movie Carnival. A lot of true Star Wars Fans could not accept his intentions and well, everything he did.

And so, why the fuss? 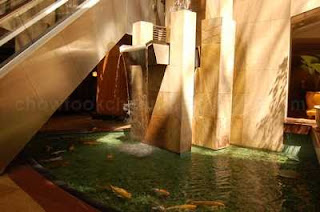 OK, here is what I think is the problem. Let's take the Perodua Kancil as an example. The Kancil, is actually a 90's rebadged Daihatsu Mira. Anyway, the concept is this. You like the car and you want to make it more Malaysian while at the same time, incorporate as many variations/ideas into your design so that it would look as unique as possible and also, not to be seen as a pariah when compared to your peers overseas. So, you go about making it, buoyed with positive encouragements from people who have absolutely no idea what the heck it is or what you're doing. Then, when you showed it to the true Daihatsu fans, you got shot left, right and centre. 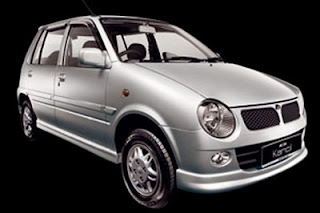 This is the Perodua Kancil, whose design has
already mutated from the original Daihatsu
Mira by our clever imaginative people. 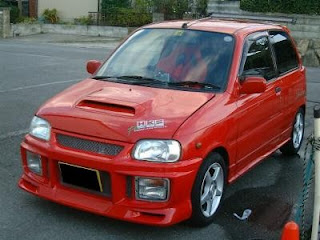 And so, everyone thinks they're an artist.
And came up with their own designs. This
is still, quite acceptable, changing its looks. 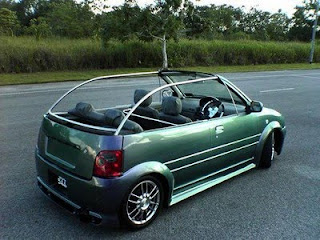 This is very daring, but still nicely done. 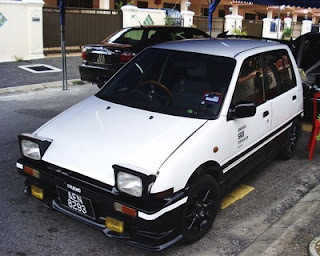 But of course, there are some who just have no
inspiration or confidence, although they think
its beautiful in their eyes. 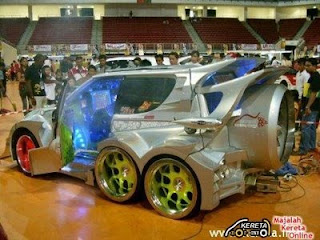 In the worst case scenario, some have gone totally
off tangent. But this does showcase their superior
imagination and their understanding of the basic
design. Or the lack of it

Now, for those who have watched Star Wars, you would have noticed a very famous Bounty Hunter called Boba Fett. Or rather, his costume. Its a Mandalorian Shock Trooper Armour he's wearing if that's what you're asking. Except that his was from durasteel instead of the traditional beskar. After reading a few Wiki's from the Net, Mandalorians are nomadic fighters which got the worse off from both the Sith and Jedi wars. In the end, after so many millenia, separated and leaderless, surviving Mandalorians swallowed their pride and degenerated into mercenaries.

And what has this go to do with today's topic?

I have read the thread again and again. And in the end, its very simple. Someone wanted to share his Mandalorian Armour but got savagely attacked in return. And worse of all, he has taken the trouble to get it recognised by the Malaysian Book of Records. (Stop laughing, you) Last but not least, it was recognised by Lucasfilm Ltd just like the 501st just to rub it in. Still, you can never take back the first shot that was fired. Even deflecting it is almost impossible. But after going through the Internet, Mando Mercs are very interesting indeed. It actually opens up a new World of customisation.

For you see, in order to join the famous 501st, your costume must be up to mark. And that mark is very very high. In other words, how much you dedicated your time and expense, shows. A lot of people have gone to a lot of effort to make their costume as accurate as possible. They use resin, pvc, syntra and so on. But please la, resin on papier mache? Ok. maybe you intentionally want to make the armour look worn but for those who do no tknow the difference from a Mandalore or a Bangalore, they know what papier mache is. Its like insulting those Daihatsu fans who have spent a lot to do up the fibreglass and painting, with a non aerodynamic design made out of toilet rolls and aluminium foils. Even as I am typing this, my mind is already coming up with a custom Mandalorian armour........

True, we have to accept them as they are but there are some, I too, cannot accept. 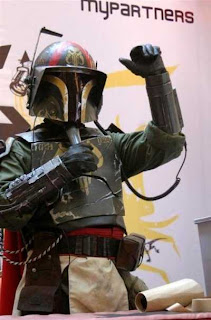 Mandalores are cool and tough. Eating
a mic is not cool. Using a wireless mic
is uber-cool. Mandalorians abhor non
standard Galaxy fashion accessories
such as Sector 001's hip-pouch and
telephone handset coils. 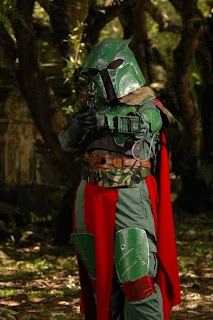 Oh, God this is hideous. No self
respecting Mandalorian would
show up with a helmet that has
been bashed by a Jedi. And it
has been known that no
Mandalorian have ever seen
the Watchmen. 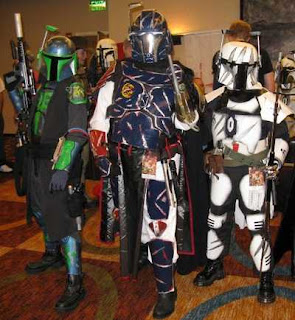 Mandalorians are fighters. Their armour is
very important to them, apart from keeping
them alive. They call themselves Clan Jebat.
I hope its not after Hang Jebat who rebelled
against the Sultan of Melacca, went amok
and then got killed by his best friend. 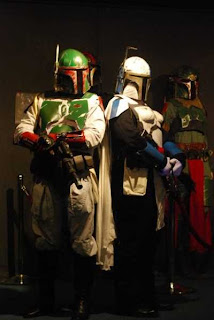 Female Mandalorians are as tough as
their male counter-parts. They are also
expected to fight and defend when
the men are not around. But I did not
know they have floatation device built
into the armour. Or are they alien
mammary glands? 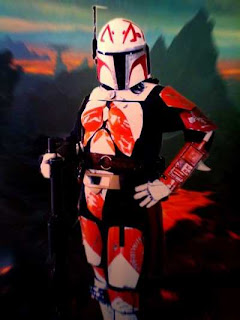