While we were at the PJ Old Town, we stopped by the place again and this time, they had some nice toy guns. Unfortunately, there were no revolvers of the 'right' size. But when I saw these mousers, I really went nuts and bought one. Ever since I saw Star Wars and realised that Han Solo was using one of these, well, yeah, I wanted one. But I am not an expert to tell the difference as all the details escaped me. However, I just wanted one and now, I have it. But I am not going to waste my time converting it to Star Wars as I have my own ideas. 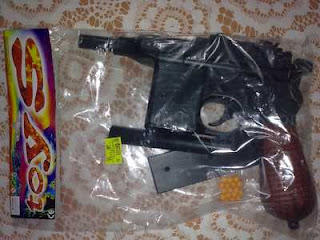 Anyway, this one retails for RM12.00 and it shoots BBs 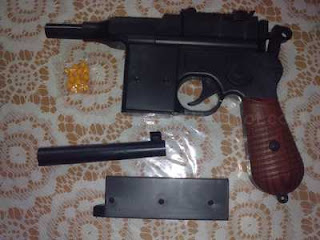 Here is a better picture once its out of the bag 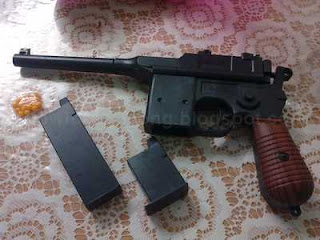 There are two ammo mags and they fit perfectly into
the gun. Me, I have great delight in ejecting the mag
from the button located on the other side. One push
and it falls out of the gun. 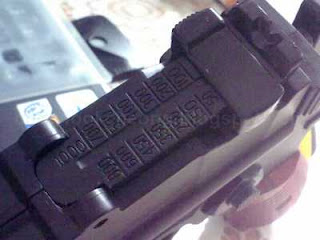 The sights are useless. It doesn't flip up or anything 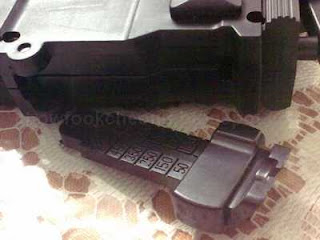 Its just a decorative piece. At first, I thought it was
a cover for where you pour in the BBs instead of
using the magazine. Chinese designs are very
weird sometimes. 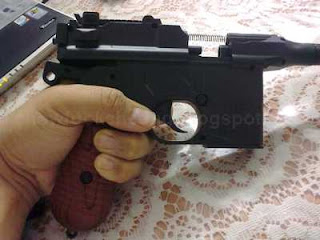 Later, I found out that in order to 'load' the gun, I
had to pull the upper part all the way back. I had
to use force and I suspect the spring is very hard. 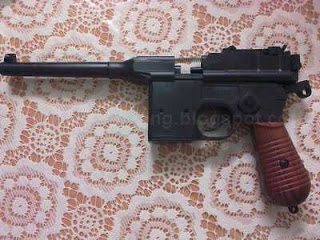 The hammer at the end (right) has no function
whatsoever but makes the gun feels more real
when you move it with your thumb. 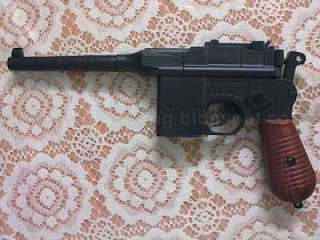 Is it me or is the barrel bent? No matter, the barrel
is not in line with my modification ideas.
Date: Saturday, May 29, 2010 3 comments: Links to this post

Two lunches in one day

OK, this is weird. We're actually having lunch in two restaurants. This was because we wanted to try the Subang SS15 Rojak but because they're 'hot', the girls could not eat them. And so, what we did was, as luck would have it (or curse), KFC was just next door. The girls started out with a kiddy meal, nuggets for Kristine and chicken for Kaelynn. It all went well until Kristine wanted chicken too. But the time we got it, I was almost stuffed due to my obligatory DBKL duty. Maybe I am hungry but the chicken rice this time tasted delicious. 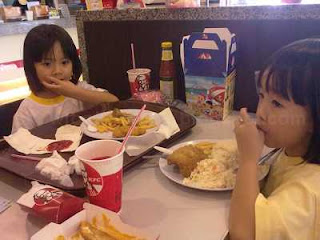 Although we shared the cheesy wedges, there was a lot
to 'clean' up as I had to finish the rice, chips and drinks
After their meal, we went over next door for ours. This is the so-called famous SS15 Rojak from Subang which we got to know about it from Monday's The Star. The place is nothing to shout about and if it was not for the big "SS15 Rojak" sign, I would have mistaken it for a normal mamak eatery. Anyway, we ordered our rojak along with the cendol. Mine was the normal egg with sotong while wife's was with added noodles. 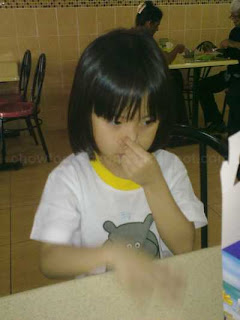 Kaelynn expressing herself in her new surrounding 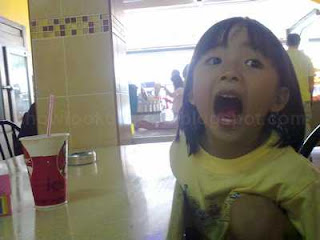 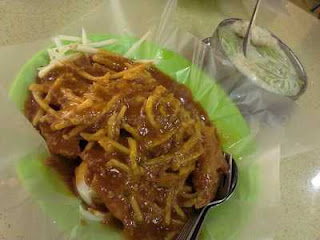 My rojak arrived with the bowl of cendol. The cendol was
served with a metal bowl and it was so cold, the shaved
ice actually froze solid underneath. If you like those red
kidney beans, there's quite a bit in there. 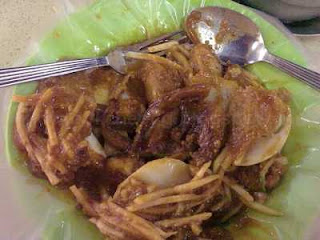 Personally, the rojak has too much crunchy stuff with
too little cucumbers. In fact, they're too finely sliced. I
like to have the crunchy stuff 'fresh' but this one felt as
if it was deep fired too early in the morning or the night
before. 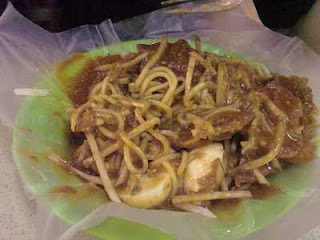 This is wife's with a lot of noodle. The sauce is nice
but its too sweet and not hot enough. Hours later,
we're still thirsty....
Date: Saturday, May 29, 2010 No comments: Links to this post

Today, there was only one reason I needed to go to Pasar Road. Someone wanted an antique green indicator/switch and all the shops I went, most of them said they do not have them anymore. Some even laughed. And one even suggested that I take a plane to China to order some. They did not snigger when I looked them in the eye and told them that it would cost too much to book AirAsia for a weekend trip. Moreover, my International Passport has expired and I can't even curse in Mandarin.

Then, as luck would have it, the ATM was out of cash. It said on the screen, after you logged in, that you can have any other services except making it spit out cash. 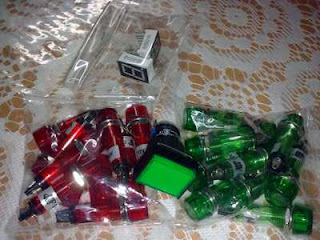 And so, I got two more blue 7-segment LEDs, a new
modern green indicator, and two bags of 'specials'. 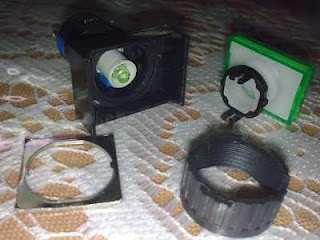 This green indicator, like the switches I used to get,
has removable LED and Lens. In theory, just like
what I did, I can modify the green LED to use a
lower voltage instead of 12 volts. 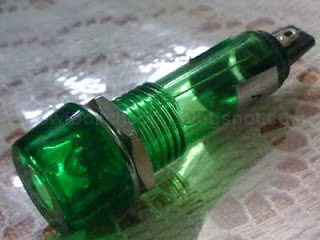 As for the specials, they are cheap stuff. And to me,
they are great LED holders. Here, i took out a green
one to show you why I was so happy with it. The
label says, 12 volts. 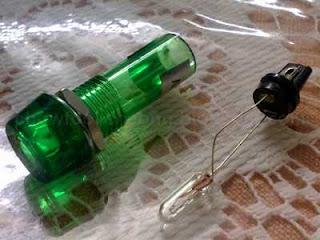 But once you gently pry off the lower part, you
can see that it is using those 12 volt bulbs 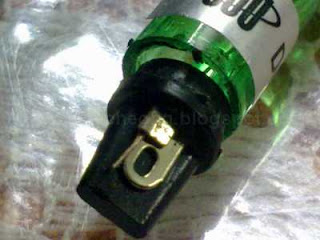 Which is good because, now I can modify it
with some nice LEDs since as you can see
from the picture above, the legs are just
crimped on with bent metal. Not soldered.
Date: Saturday, May 29, 2010 No comments: Links to this post

This morning, everyone was excited except for myself as I really need the beauty sleep. My Aunt from Australia has arrived and so, everyone wants to go to Sentral to fetch her. And boy, when I woke up..... 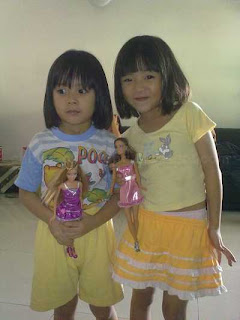 The girls were instantly Barbie fans 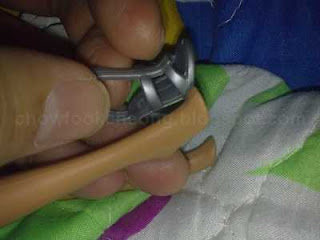 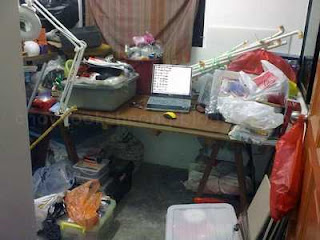 OK, so this is still a small part of my stuff. I have to
go back to KK soon to protect all my things because
now they have discovered termites there. Shit, man.
This is not good news as this means I have to use a
lot of trips to get my stuff back and wrap them in
plastic. Then this room would be too small because
all my stuff would completely fill it up. This also
means I have no space to do any projects of any
electronics for at least a few months until I get things
sorted out. Sigh. So close and yet no cigar.

I am very angry about this. Finally I have some space
to work and now this fucking termite crap comes in.
Date: Saturday, May 29, 2010 No comments: Links to this post