Since I have not had the chance to view the rifle up close, I woul dhave to assume a lot of things. So, I am assuming this little plastic thingy here would fit the rifle's scope. Its about 39mm at the front. This is for the scope in the front.

So, what I am proposing is to fit a 3W White Luxeon LED (5W is too much) into that pipe. But in the middle, I would be fitting a RM8.81 collimator lens which would narrow the radiating beam into a 10º spot, more or less. And by coincidence, the inner tube of the pipe measures about 21.6mm, which is quite OK for the 20mm lens.

How am I going to secure them? Well, I am thinking of using non conducting epoxy puttyto seal the whole area except for the other side of the Luxeon Star where the other side of the metal heatsink must connect to another larger part of a heatsink to draw away the Luxeon's heat. Since the rifle scope will be on all the time, I would either have to make a big heatsink or use a Luxeon Driver circuit or both. 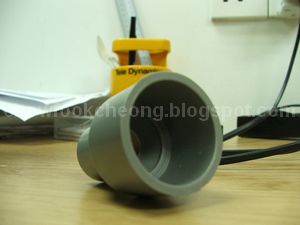 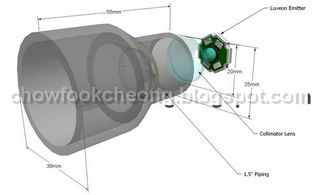 OK, so, its not so new anymore. I have been using this torch for awhile and lately, it was giving me problems. At first I thought it was the switch at the rear end but when I checked it with my meter, it was fine. Maybe it was the barrel which was not screwed tightly to provide a good electrical path. Nope.

Then I began to examine the LED itself. Aha! One of its legs was snapped off. You see, the Luxeon LED was soldered to the metal plate and that was it. There was no other mechanical means of securing the component reliably. So, when I dropped the torch, the shock from the fall vibrated the head unit where, I guessed, the Luxeon LED and the metal plate vibrated against each other sp hard that the generated stress snapped off its tiny leg right at the body.

I had to use a blade to scrape off some of the LED's body so that there are more contact area for the solder to melt to. Dang! Maybe I should have puttied the surounding area and also get a double-sided heatsink transfer tape which costs a lot of $$$. Then again, its just a torchlight, not a RM1000K chandelier. Ha ha ha ha ha! 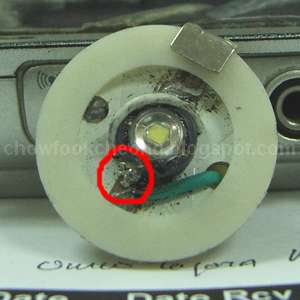 The read circle was where the leg snapped off and
I had cut into the body for more contact area. The
white wire above it is just a small solution to secure
the LED to the plate. I cannot use any glue as the
underside of the LED must touch the plate which
acts as the heatsink. Yeah, Luxeons are hot

You know, after a long hard day of working, I would like to come home to the Wife and Kids, have a nice bath and also some family time.

But this is the worst scenario one can come home to:

(Image taken from www.neatorama.com)
Date: Tuesday, July 11, 2006 No comments: Links to this post