And so, with the extra time I had in between customers, I went and picked up my watch which was in the shop for weeks. Actually, it was already repaired just a day after I left it there. But I know that it won't last long as the 3-in-1 sensor is about to go bye-bye anytime. So now, I only wear it when I do remember to wear it. 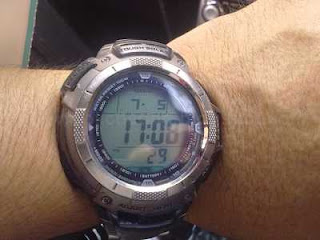 I was tempted with the latest Pro-Trek but
because its using an analogue hand, I was not
too hot about it. What interested me was the
white led instead of the bluish-green EL lights
like the ones in my watch. However, there was
only one LED in there, which makes sense as
they consume more power than EL.
Date: Monday, July 05, 2010 No comments:

How to switch off a Calculator 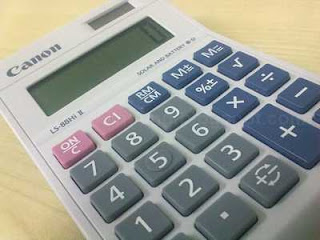 Our Admin girl, Yati showed us how to
switch off a Calculator that has no switch.
Then again, all calcs nowadays has no switch
So, you just press [5] [6] [ON] all at once.
Date: Monday, July 05, 2010 No comments: