When I got the toothbrush, I did not expect it to die just after a month. Maybe its because I start to learn how to be foul mouthed, this Chinese toothbrush decided to commit suicide rather than help me perform germicide (is this the correct word? Ha ha ha ha)

So, I had to get a new one and I was shocked with the prices. I mean, which nut would go for a RM18.00 toothbrush? And there were so many to choose from. There is one which would flex back if you brushed too hard, while some would change colour over time to tell you when its time to change (where did the colours went, heh?)

Somehow, I can't find the ones which tells if you're pregnant, drunk or have eaten garlic. And none had timers which tells you when to stop brushing in case you used polish instead of toothpaste by mistake. So, I settled for a cheap Rm1.99.

I mean, given the way things goes, it'll probably die in a month's time anyway. 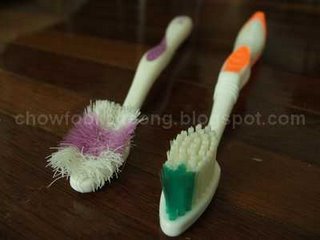 The old and the new. And looking back, I think I can use the old toothbrush sideways.... 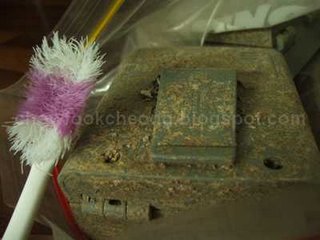 But it has a more important job to do, which is to help me clean off the termite

gunk. Unfortunately, after this photo was taken, my wife threw it away the next

One of my cousin's cousin (from my Mom's side) has given her a mobile phone. And yes, just a mobile phone. There were no nice itty bitty box, charger, instructions, etc. Which means, I have to step in and prep the phone ready. But I am stopping short of giving her a sim card.

Mom did not indicate if she wants go into my Celcom package which I am currently paying for my Dad, Brother and wife. But she is thinking of getting a pre-paid though, since she argued that she seldom uses the phone (yeah, right. My phone bill went up a lot last month). Also, she claims she does not know how to use the phone, compared to me which I figured out most of the functions within an hour. But then again, I do not know how to operate a VCR, she does.

The menu system is still crap, compared to Nokia's. I mean, it took me hours to find out how to lock the keypads. Who would have thought it was in the Security section? 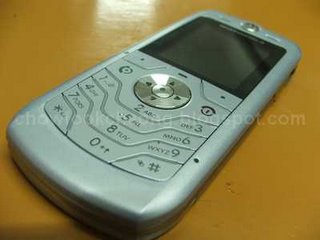 First impression of this L6 is that its quite flat. And because the casing is metal,
it feels solid and fragile at the same time. Time to charge the phone up 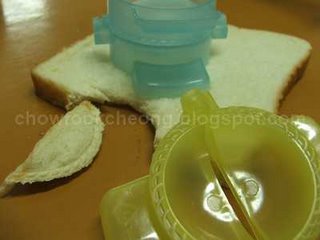 Chocolate currypuff anyone? I got distracted while looking the phone over 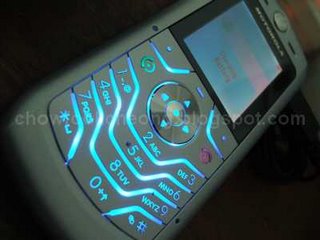 The phone lights up briefly when charging. The keypad feels nice, though
Date: Tuesday, January 23, 2007 1 comment: Links to this post

I wonder if a certain guy from KK is interested in using these 5mm LED holders for his lightsabers instead of the usual black collar types. 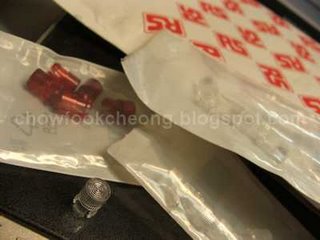 Yep, as promised by RS, it came through the post in just
4 days. All these 15 LEDs jsut costs me under RM28 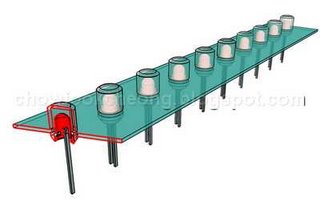 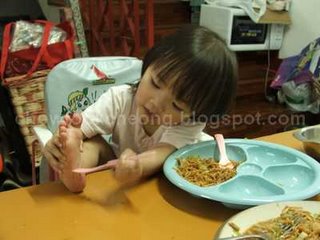 Two ladies in a Wira

Maybe it was because of the long talk I had with the Boss. maybe it was because my car was narrowly squeezed between two rouge buses. But whatever it was, I was late for my 9 o'clock. You see, I had to get the Motorola charger for my Mom and the shop closes at 9. So I had to rush all the way from Kepong to SS2

And then, when I was about 300 metres, disaster struck. As those of you familiar with SS2, there is a T-junction (not the KTV T-junction but the other end) which you must enter to get into the shops. I was at the main road which means, I have the right of way to turn into the junction. However, there were a lot of cars and a lot of frustrated people had to wait for thier turn.

As it was my turn to go into the junction, out came this golden Wira all off a sudden, blocking me. I was blocked because the cars behind the Wira had move forward and they cannot reverse. And this trapped Wira then created a traffic jam for the opposite traffic.

I think the two ladies in the car thought that because they're ladies, they can have everything their way. So, the driver smiled to me, hoping I would give way. But since I was a hard-core Engineer before, these human wiles does not work on me. It pisses me off to think they could pull such a cheap trick like that instead of a nice "sorry". So, I called them stupid.

Apaprently, they did not understood my sign language. So I gave up and was about to give way for them until I saw her passenger which was waving frantically, in an angry face, telling me to move as if I was the one in the wrong. So, anger level shot up. I showed them that I have pulled the handbrake up indicating I am staying put.

After much reversing and driving, they managed to cross behind me, which eased the traffic a little but by then, I turned in and showed them that I had a lot of space to play with. 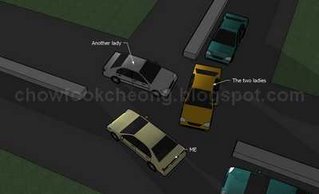 You know, if I had the camera ready, their faces would be priceless