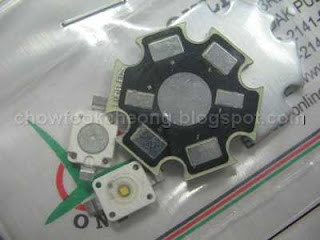 Went to Pasar Road today and bought some new 1Watt LEDs.
This time, they came separated from the STAR heatsink as
they told me, some of their customers designed their own
boards and do not need the heatsink. Still, I bought two
and it costs a fraction of when it first came out

A lot of people looked at me funny when I told them that I am taking half the day off on Monday for Kristine's first day at the Kindergarten. I mean, its already past the half-month mark and NOW she is going to school. We had to because the house in Bangsar was finally ready. Originally, it was supposed to be before Christmas but since the contractor being the contractor, things either got delayed or experienced shoddy workanship.

Still, Kristine got to experience her first day at school. And I made sure I could bring her there. The Kindergarten we sent Kristine to was already there since the 70's. But lately, they have "changed" names. Anyway, by the time I took here there, Kristine's class was quite empty. But later on, they came in one by one. Talk about puntuality. But I could not fault them since the "parents" accompanied them are blue-collar workers.

Kristine's day went off without a hitch, and she was really enjoying herself, wandering about so much that the teached had to hold her close by. One of the morning rituals was to sing a "Good Morning" song. There were a lot of activities in the class and she had a wonderful time. So, feeling secured, I went to the office to finish some matters. Feeling a bit peckish, I decided to have some breakfast. By the time I came back, I missed their Gym activities. Then it was back to the class where they had a morning break which consists of pasta, banana and orange drink. And just there an then, I saw her crying.

She was crying and sobbing. The teachers tried to console her. Finally, I had to intervene and they let her out of the class. She told me that a "jie-jie" (older sister) scolded her and then left. But since no one saw this, I could not verify the incident. But there were two theories:

1) The "jie-jie" could be another student or a teacher. But because everyone is speaking English, which Kristine was not used to, and with so much vocabularies, she could misinterpret a well meaning message.

2) She got bullied. Who or what did that, I am not sure but in this case, I will not intervene even if Kristine pointed out that person to me. I want her to deal with this herself instead of me running over to her all the time.

Anyway, after a short walk, I took her back to the class which she refused to enter (and wants to go Home). I have to force her back in because at this moment, she hates school and if I provide the solution for her (by taking her away) there is no lesson to be learnt. I have to tell her that she must attend school and some of the problems she must face by herself.

By close to twelve, she was crying the loudest and with the school assitance help, I had two choices:

1) Bring her back early. Since this was her first day at school, I have the "priviledge" to do so.

2) Put her back to class. This is, so far, the better option. She can cry and cry and as loud as she wants, but she needs to go back into the class. So, after a brief walk around the school to calm her down, we went back to the class.

The reason I did this was because I do not want her to be afraid of something that she looked forward to with excitement since last year just because of one small incident. And if its bullying I want her to deal with it too. 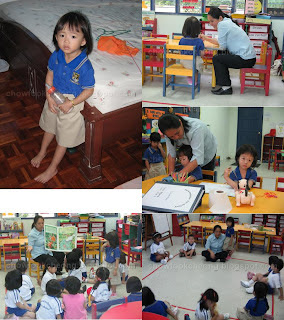 [Clockwise from top left]
1. Kristine with her uniform
2. Krsitine and her teacher
3. Some activity before class starts
4. The class's "Good Morning" song
5. Kristine looking interested when her teacher tells a story [Clockwise from top left]
1. Kristine just coming out from the gym
2. Teacher still holding her
3. A few minutes before the 1030 break
4. And then it happened..... 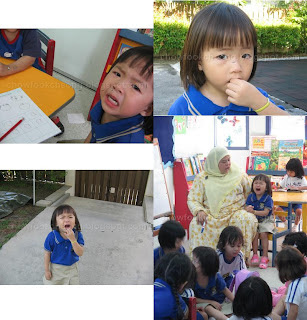 [Clockwise from top right]
1. I took her out for a hug and some talking
2. She still cries and this was the loudest
3. Kristine wants to go home
4. But I sat with her in the class instead

[Top to Bottom]
The teacher distracted her with a colouring book
And I let her use the pencil sharpener
Kristine was tired at the end of the day
Photos courtesy of blueeyebabe's Canon Powershot A400
Date: Monday, January 21, 2008 No comments:

End of the Month

This is what we do at the end of the month. My techs submit their overtime claims, I check and authorise them and then, only then, do I do mine. But since I do not have overtime claims, mine is on travelling and petty cash expenses. Although in the picture you see a huge chunk of toll claims, its actually the petrol bills that are the main expenditure. 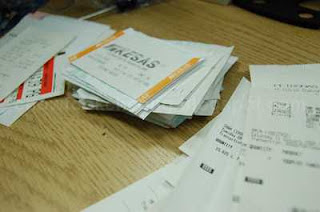 By next month, with the move back, I hope to
save more money on my travelling expenses.
For the past year, I only saved enough for
one tin of milk powder. Haih
Date: Monday, January 21, 2008 No comments: