Cleaning up the Kaelynn way 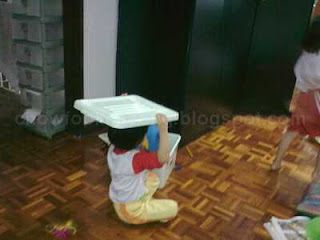 Why is Kaelynn holding the box cover? 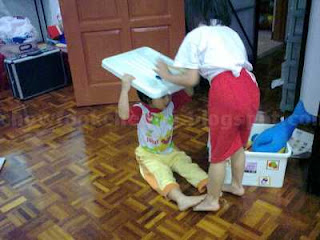 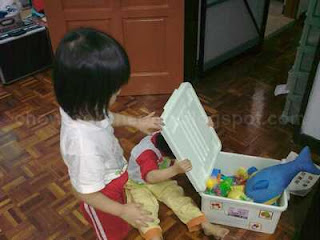 And when it is full, Kaelynn can then tilt
her head to drop it onto the toy box

OK, so, its time! I wanted to get this Nokia 5800 since last year but because I was waiting for the "arrival" for the so-called Google's Phone in Asia (I was quoted RM3600 for an unlocked version) I decided to wait longer. I was asking all over the shops in Klang Valley (including those HTC dealers) and not many know about the Goole phone despite it being manufactured by HTC. And then, after its launch in October last year in Europe, the Nokia 5800 was launched in Malaysia just least week on January 9. And so, after knowing about the price (RM1,499) I decided to choose the Nokia 5800 afterall, with or without my Wife's blessing (heh)

But it was not an immediate purchase because of my Credit Card problem. Its a long story but here is the summary: I lost a tester in Prai as I was rushing back and since my friends could not locate it, I had to buy one from eBay as there is no stock in Malaysia and they do not sell you half a set. The eBay fellow charged me USD1180 (that's RM 4262.79) instead of USD40 and after a weekend of suspense, they replied to my eMail and reversed it. But with the exchange rate and the three day delay, I lost quite a bit (as the amount reversed was RM4076.18). So, by Friday, the Credit Card is cleared and I am A-OK to get it.

Yeah, yeah, many of you would have known about my biased opinions of having PDA and phone functions merged into one. However, as time goes, more and more people wanted this concept and so, alas, I could not be Prime Minister in time to ban such technological advancements, I decided to go with the flow. The Samsun Omnia was quite nice but because of its hefty price tag, I had to consider getting it via hire purchase either from Courts Mammoth or Maybank Credit Card. However, in the local Forums, some complained its a very good "hang kei" (system that hangs a lot). The rest of the decent PDA phones were also priced at RM2000 and above. And so, Nokia 5800 it is. The first ever Symbian (non Windows Mobile, la) S60 5th Edition touch-screen phone for RM1500, and its mine as of 16th January, 2009! 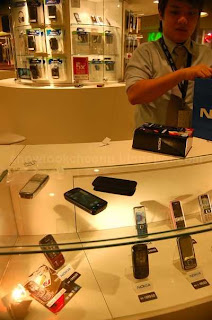 This is the Nokia shop in Mid-Valley which I
always pass by without buying anything as
at those times, I do not need a phone for my
own self. Budgeted for everyone but myself.
He tried to move away when he saw me taking
the photo but I quickly set it to wide. If I try to
do this with a non DSLR, he would have gone out
of the frame easily and with time to make coffee.
He's a nice chap but he tried to wing it using iPhone's
features to teach me how to use. Which is OK since
the features are almost the same, IMHO. 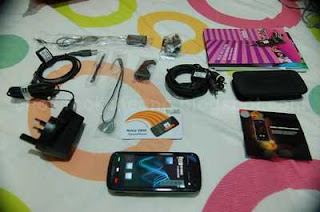 The whole Nokia box opened. You have the HS-45/AD-54 headset and
earphones, the weird guitar pick, extra stylus, DVD software, charger,
manuals, that free 1000 songs download scratch (and no win) card, the
nice flast black housing and weirdest of all, an output cable to connect to
your regular TV screen. 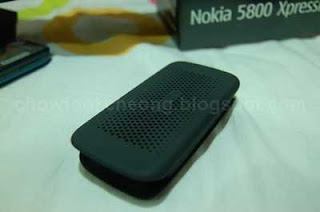 As the Nokia 5800 is relatively "new" in the market, I have not seen
any decent casing for it. And so, I ordered a set from eBay for less
than RM21.00. I don't want those flip open leather cases nor those
expensive "get a scratch in less than a minute" crystal casing you see. 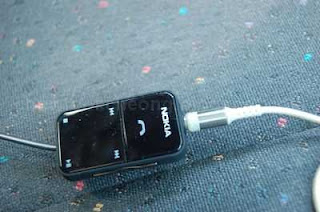 On the first try, let me tell you about the headset. It has a 3.5mm jack
which you plug at the top of the phone and at the other end where the
controls are, you can actually plug in your favourite 3.5mm walkman
earphones. Here, I plugged in my ultra-expensive A4Tech Rm34.00
noise cancelling earphones. What I like about this is that apart from
letting it connect to your fav earphones, it has total control for the
music player (PLAY, STOP, REV,FFW, SKIP, VOL, ETC). 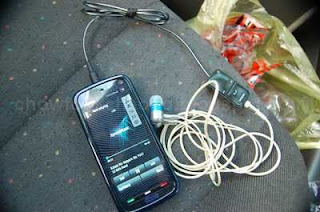 But it was no until I plugged in to the phone, I got another surprise. When
it rings, the music would stop and it will punch in the ringtone, followed by
a waht you would call a text-to-speech annoucement of the caller's name.
That is, if the number is from the phonebook. But again, when the TTS
pronounce a non English name, it is hilarious. But after a few times, I was
looking for the feature to turn it off. Imagine if you name is "Lai" (as in LIE)
and it pronounces as "Lay". Still, I have not tried the buil-in microphone as
I can't seem to be saying anything through it. 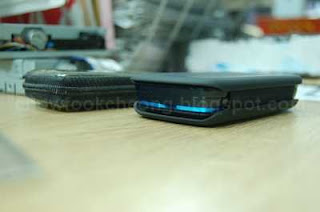 So, how big is the phone? Well, by now, you'd have known about its
measurements in the Internet. So, I am going to compare it with my
Sony Ericsson T630 instead. In terms of height, its almost the same
when I slot it with the casing. But once I take it off, the phone feels so
anorexic. Oh, and about the feel, because its made mainly of plastic,
for a RM1,500 phone with so muc features, I would not expect much. 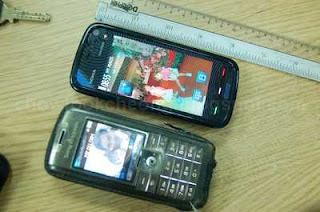 Sice by side, they're almost the same but in reality, I expect it to be longer
or thicker since I do not like thin candybars. But the again, that's just me.
3.2MP Camera
The Nokia 5800 boasts of using Carl Zeiss lens. Personally, I am not sure about Carl but there is only so much lens in the eyes you can take out before going blind. Still, all I can see from the camera is just glass. For a 3.2 Megapixel and from a non FujiFilm camera, the image is so-so. I am not going to dewll too much on this except that I now have a spare still and video camera. Although the two white LEDs do help a bit on being the flash, somehow the pictures turn out so so. Then again, this is a mobile phone camera and experience has taught me not to expect too much where dim lighting are concerned. 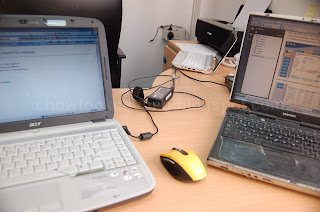 This is a shot taken by my 5MP Nikon D50, so you cannot
compare much in terms of quality and resolution la. Then
again, I should have gotten a 3.2MP camera to test it out
but at this point, I do not have any. And my Wife is using
her Nokia 6300. 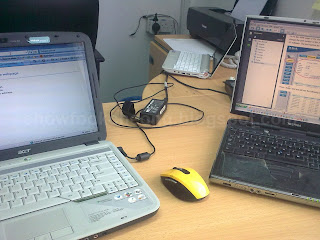 This is almost the same shot taken by the Nokia 5800. 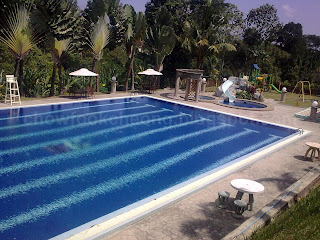 This is an outdoor shot. It captures the ripples by the pool quite nicely
Yeah, I am going to turn this with a tiltshift picture later. 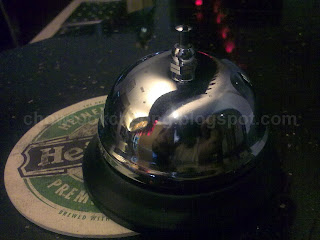 I think there is something wrong with the camera software. Twice I tried
to switch off the flash, and it came on still. Maybe its to help with the
focusing. Must update the camera's software when I have the time. 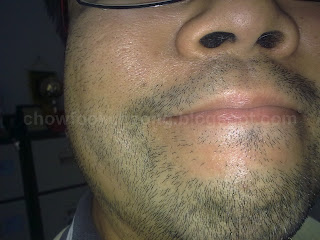 A closeup/macro shot about 6 inches away. When I zoomed it, the image
is still quite ok as I can see the hair roots clearly. And no, I did not
purposely stop shaving just to take this shot. Don't tell my wife. 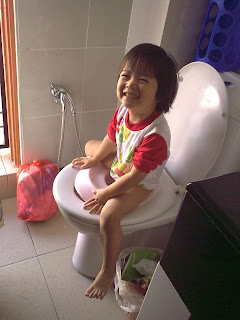 Playing with the White Balance. Here, I set
it to indoors or shade. The image looks ok
but its the edges of each image which is
unsastifactory.
Brief Exploration
Opening the camera for the first time. Everything is quite simple as I have not even begun to read the manuals yet. And so, relying on my experience as a "never seen before sam bah lou", I managed to get this far. Kudos to Nokia for designing such phones where everything is well thought out. As time goes on, I noticed that on any mobile phones, Nokias are the easiest to use after a few minutes of figuring it out, compared to others. For example, I really had to read the manual for the Sony Ericsson T630 when I first got it.

Anyway, on to the brief exploration.... 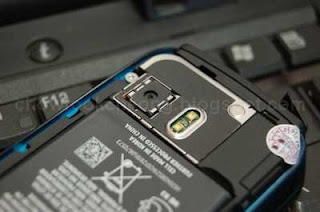 This is the camera module with the two bright white LEDs.
And to remove the battery, you just have to use your
fingernail to lever it out. You will feel a slight click. 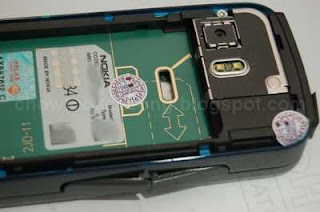 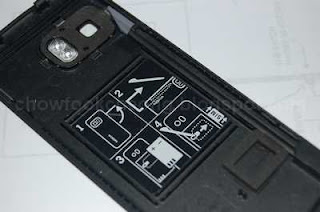 And then, I flipped the phone cover over......... OK, so NOW I can read the
instructions on how to remove the SIM card. Oh, the stylus is housed in
the phone cover and not in the phone. OK, this is something new. 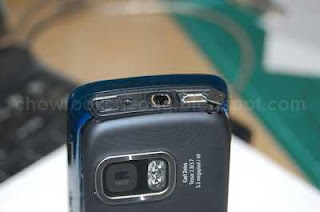 Compared to my Wife's Nokia 6300, the USB cover is a pain to open.
Never mind if you have nice fingernails as the cover is quite tight. But
for the Nokia 5800, you just use light force and it will open and then
swivel away. Not bad here but I am afraid how long it will stay like
that since it does not have Infra-Red connectivity. And I still have not
decided to get a bluetooth USB dongle even if its a small one as they do
take up one USB slot in my Notebook.

Software
Today is the third day I am using the phone and since I am not an expert in software applications, I cannot really say which is right, which is wrong. But here are some quick observations:

1) The GT-R game supplied really uses the phone's sensors as if you're playing with a Wii
2) The Boing game in 3D uses the touch input.
3) Thank goodness for resistive touchscreen (I think everyone is going this way instead of the more common capacitive touch screen. So, I can use almost anything on it and it will register.
4) I can't find the alarm clock volume and I think its related to the ringing volume, oh dear.
5) I think I really need to read the manuals about activating the GPS because there is one saying about Nokia's 7-day trial. So, really, must pay one or not?
6) The phone sensors is a bit weird for me. Most of the time, it turns to landscape and I have quite a task turning it back especially in a LRT journey since inertial forces are everywhere.
7) Maybe the LEDs in the camera serves as focus assist and also as flash.
8) When I have the time, I need to look for the phonebook editor to edit all the details for everyone and also, update the phone, etc. So far, I managed to copy all the contacts from both SIM cards but not the phone memories, which will take time.
9) And I have to look up at Maxis charges because once I turn the phone on, I have loads of messages from them.

Pros:
1)So far, its what I expected

Cons:
1) SMS's and some other program (I forgot) tied together in terms of text entry.
2) When the phone slipped from my lap in the car and landed with a jolt, the microSD card needs to be re-inserted. So, all the songs and wallpaper disappears until I switched it off, re-insert the microSd card and re-booted it.