We had meals outside the house today and although it was nice, it sort of turned out to be quite expensive. Still, as long as the two girls are enjoying themselves, we're OK with that. Still eating out dispenses with a lot of problems such as meal preparation and the washing up. But it also has its own problems such as looking for baby seats, "compatible" menu, suitable atmosphere and most importantly, price. 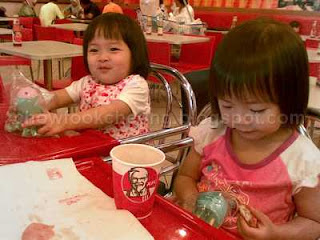 Kristine and Kaelynn, both with their KFC toys
When you buy one, you have to buy the other 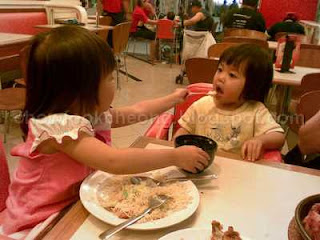 Kristine trying to feed some porridge to Kaelynn 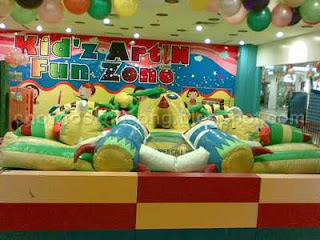 Attention: This was not Kristine's fault.
Date: Sunday, December 09, 2007 No comments: Links to this post

Today, we were at Mydin, Subang Jaya. This is because my Wife has been delegated to buy presents for her committee or something and the stupid treasurer has left for Hong Kong without passing her the allocated sum. So, in the end, we had to go to Mydin and buy all sorts of crap there. For the same amount of items, we could have gone to JayaJusco or MetroJaya but then, it would have screwed the budget three times or more. Although Mydin is next to Giant, we did not want to go there because of the RM10 parking fee. Parking is Mydin and shopping in both Giant and Mydin is free. But when you park at Giant and shop at Mydin, they will penalise you with RM10. This is something about Giant which I do not like. 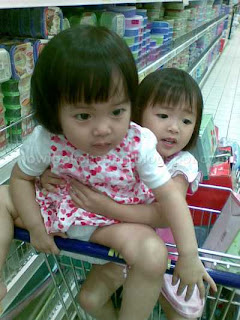 Our first trolley was full, so while Kristine held her
sister, I pushed the second trolley into position 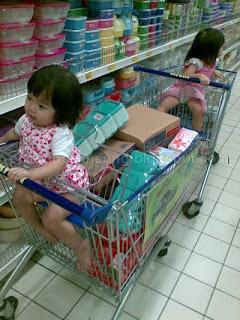 After transferring the stuff (without breaking them)
my job is done 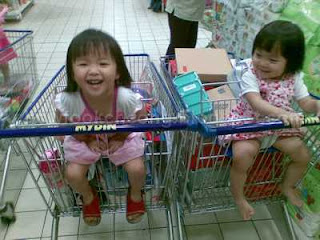 But minutes later, wife came back with more stuff. So I
had to push the trolley together like this.... 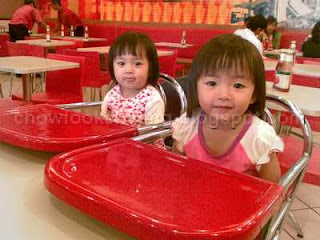 Luckily I took the van with us as the car would have
problems in the boot area. A break at KFC was our
reward for a tiring day......
Date: Sunday, December 09, 2007 No comments: Links to this post