Mommy's got a new car

So, with just a few days into the new year, we got a new car. Its the Toyota Avanza. It was time to bade farewell to my Wife's 10-year old Proton Wira which was starting to rust. Anyway, the salesperson got us a very good bargain and great discounts. So, if you're interested, his name is Alvin (012-6311138) and he is based in Section 19. He will also tell you which is the better loan schemes.

Not having test driven the Avanza, when I drove it for the first time, it was quite exciting. It was the same feeling all over again when I got my Satria more than 10 years ago and even then, I did not even test-drove it. Alvin was quite through in going over the details about the car, making sure we know enough about the car before we leave for home. He even used his own car protection kit to wipe any glue or dirt smudges. He also told me that the Avanza is a rear wheel drive (Initial-D! hee hee hee) which tends to oversteer. Lastly, after the photo-taking session, as it was late in the evening, we had to decline the facilities tour.

How is the feeling of driving the Avanza? Well, I can tell you that it is no different from driving the company van, since I am used to the height by now, IMHO. But for my wife who has driven the Wira most of the time, I was worried as the car is quite high. And so, it could b a bit disorientating at first. And through the rear-view mirror, the view is limited to mostly through the rear window and so, I'd have to adjust the side-mirrors to make sure the blind spots are minimised. The power steering is quite light (compared to the van's which has none at all) and I was surprised at its turning radius too.

How is the feeling of driving the Avanza? Well, let me put it this way. I have now driven a few cars ranging from:

So, driving the Avanza is no different from driving the Nissan van except that is has power steering, better pick up and more comfortable. I am not reviewing the Avanza since I don't even know how to review a car but I will attempt to list down the changes I felt while driving it.

1) Exterior
From the outside, the Avanza looks quite big. That is, until you compare it with its bigger sister, the Innova. Its a matter of perspective actually, the Avanza is quite huge if you're driving a normal car and but it is quite small when you're in a van/4x4, etc. Anyway, what I really like about the Avanza is because of its height, getting in and out of is quite easy as the height of the seats are just right. All you have to do is to just bend your legs a bit when you enter compared to my Satria which was more like trying to lie/squat down.

Opening and closing the doors is quite a pleasure. No more hearing those metallic ringing. The doors close with a solid thud. About the rear boot, you just have to open it like any normal car. difference with the boot. Unlike the Innova, you'd have to open the Avanza's boot just like any ordinary car boot; lever under the driver's seat or with the key.

2) Interior
The interior is cream in colour, ranging from the plastics to the car seats to the carpets. Not only does it make the cabin look bright but any dirt or streaks of them will easily show up. With the plush seats, the cabin looks very inviting. And it can really seat seven person. However, for the three passengers at the back, getting in and out would be a problem since either seats in front of them has to be folded first.

But once you fold the middle seats away, the car looks very spacious and its enough for both Kristine and Kaelynn jump about inside (when the car is not moving, of course). However, all this come at a price. With the back seat being used, the Avanza does not have much boot space. You can try with a 6 inch briefcase and that's about it. And when you fold the back seat, you have to fold the whole seat (that's why it can take three persons)

Because of the boot space issue, the tools for the car and jack is hidden under the front passenger seat. And like the van, the spare is located under the rear of Avanza and you would need to unscrew the cage holding it.

The car is very quiet but once you come near a “noisy” vehicle, you will know it. As for me, it felt as if one of the doors were not closed properly. Still, for the price, you really can't have everything.

From the driver's perspective, the car is very forward. Not as forward as the van but it makes the car easier to “sense” obstacles. Well, to me, of course. And not only that, the design of the dashboard looks quite pleasing too. Not that I am complaining about other Toyota model which have their odometers placed in the centre of the dash. But while driving, you can easily reach out to control the air-con, the radio and other controls without having to stretch you hands too much. Also, you can control the fog lamps from the right stalk (which you would normally use for indicators and headlights)

3) Handling
The handling of the car is quite stable. However, if its up to me, I would prefer a set of stiffer suspensions. The standard 15 inch tyres made the ride enjoyable and since it belongs to my Wife, I have no say in terms of modifying it. But then again, after experienced it with my Satria, my urge to modify cars have slowly ebbed away with time. So, there is not much to say except that I have to remind everyone to be careful when negotiating humps, OK? Its not a nice thing when you're sitting at the back.

4) Security
I have yet to go though the manual but Alvin mentioned to me that the alarm is from Thailand. Its not a Cobra too. The alarm is a very basic unit. Press one button, it unlocks and press the other, it locks. Press the lock button a bit longer and it becomes a panic button.

You have to get used to this. If you're driving a stock standard Proton, then this would not be a problem. But it is a problem if you're used to after market alarms which automatically locks your car for you after 30 seconds because it won't. Anyway, there are two things you need to know about the alarm:

1) When you unlock the car, and if you did not open any of the doors, boot or bonnet, it will automatically lock itself.

2) If the car is locked, if you press the lock button, it will quickly unlock and then lock again. Same thing when the car is unlock and you press the unlock button. I hope I got this correct as I noticed it when I pressed the wrong buttons most of the time since the fob design is a round rectangle. There is no indication of which way is up/down except for the link to the keys.

Again, I have not read the manual to see if there is such thing as a manual override when things does not go well. For a Proton, you just press the small black push-button switch and all the bad things would go away. And because its a basic alarm, I would not be surprised if it does not have tilt and vibration sensors. So, maybe I'll have to wait until the warranty is over to get one fixed.

As for the alarm, the normal 6-tone, 2-tone variety is out of fashion. The ones that come with the Avanza sounded like birds chirping. And then the panic button is activated, the sound is very loud.

4) Minor details
Being a small MPV with almost no boot space, most of the available space in the Avanza was designed for storage. You have deep glove box and middle consoles, storage space at the front and sides of every doors. There are some nice things I found about the Avanza:

1) The petrol tank cover can hold your fuel cap. So you do not need to buy those plastic ones.

2) The rear of the middle console folds down so you can store two cups/bottles. But I wished it was like the Waja where they have a second 12volt outlet.

3) Rear air-cons which is great for the rear passengers, except for the ones sitting in the last row where you'd have to fight for it.

4) Coloured jacks. I had a peep under the seats and it has the same colour as the car.

5) Storage areas. Again, I cannot stop telling people about this. There are a lot of places for you to store your bottles or drinks.

6) Courtesy Lights. I love it when the lights dim whenever you lock the car after you get out, turn the engine on or how it will dim by itself after some time. 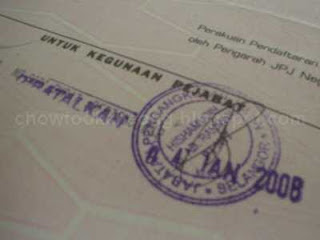 And with a stamp and a long queue, the deed is done 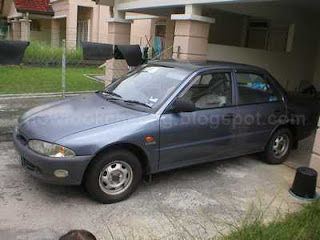 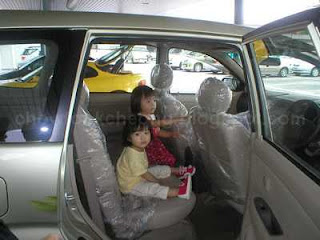 Kristine and Kaelynn checking out "their" car
Yeah, they assumed it is theirs 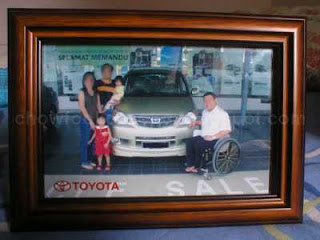 Here is a photo of all us who made it happen