Thanks for Richard of Outpost, I was able to attend the Premiere of the latest Star Trek movie, which on the Internet has generated a lot of buzz. Alas, they're not good ones. For you see, the Star Trek franchise is in a dilemma. Just like Star Wars, which has finished its 6 chapters with no plans for the continuing three and is already running out of steam. But the current animated Clone Wars is the only hope of keeping the series alive.

Star Trek, on the other hand, is following suit. With no TV series to keep it alive, no thanks to a lot of issues with their last series, Star Trek:Enterprise which pissed a lot of fans about the pre-TOS era. By Season Four, it was slowly turning around but there is so much one can do before it got canned. And their last movie, Star Trek:Nemesis was so-so as well. Its too late to start a new TV series and also too costly to risk another movie using the usual actors. The Star Trek franchise needs to be rejuvinated or else it will sink into entertaiment oblivion.

Enter JJ Abrams. Whoever he is, I have no idea and I have not seen much of his works apart from those Alias TV Series. And he has a humongous task ahead. In a nutshell, his task is to do a "Re-Boot" on the franchise which would appeal to the critical Star Trek fans and also, capture new audience. And its not easy.

But if you ask me, my answer is, yes, he did an excellent job. The movie is a bonus for a Star Trek fan because there were so many references, and it really makes you feel as if you're part of the family. Not only that, how each character develops also makes you appreciate The Original Series even more (if you can avoid those effects and designs of that time, that is). For a new audience, it makes you curious as why these characters behave as they do and surprise, that there is something out there apart from Star Wars. All that but still not too deep enough for you to get lost in. All in all, I would say, this is definitely the best Star Trek movie I have ever seen or a prequel. So, I would highly reccomend that you go and watch this in the cinema (no DVDs or bootlegs) as the THX sounds are very nice. And not only that, personally, this is one of those films you have to see it on a widescreen first. Really.

And now, for the spoilers (Stop here if you have not seen the movie yet)

Kirk's Birth
Wow. This is so cool, ala Armageddon (OK, I only saw the last 10 minutes). And for a 12-minute of glory as a Captain, he has his own ship and saved a lot of lives. And the sad while wonderful part is when they named the baby. OK, so I cried here. The feeling was almost like when Kristine came into the World for the first time. No, I did not sacrificed the shi... er, car for that matter.

Spock
The movie concentrates more about Spock and how he came to be. And his love for his Mother and how he defends it. And yes, another emotional moment here too.

The Warp Effect
In all other Star Trek, when a ship goes to Warp, you can see it elongates like a rubber band before it snaps and hurls itself into space. And the sound effects of the warp engines powering up before the warp. JJ Abrams's way is just straight to the point - punch it and go. All I can say is, WOW! But some would say, its a bit like Star Wars's Hyperspace, especially when they break out of Warp.

Transporter effect
All Star Trek transporters have this shimmering effect which I loved but, here, its more like fireflies flying around, encasing the crew in a cocoon. OK, maybe they're making some electron candyfloss. Not so hot on this.

Phasers
OK, so they're shiny chrome, which in real life combat, would have given their position away due to reflections. But they do resemble more to the original design, which I am still having trouble accepting them. However, this phaser does not shoot streams of energy but pulses them like Enterprise's MACO weapons. So, its like Kirk and Spock shooting a real gun minus the recoil. Which is still cool, by the way. This makes me appreciate the Playmates Toy even more.

Engineering
Boy, the Engineering is so big, it makes you feel as if the Enterprise is just one big oil refinery. But then again, given the technology of that era, I suppose its logical. Still, its just another excuse for Scotty's transwarp comedy in the pipeline.

Scotty
Yeah, I like Scotty. No, he is not the reason why I went to study Electronic Engineering. (Geordi was). But being in Scotland and Ireland, I just love those accent. And he is the "latest" crew member to be "introduced", mid-way into the movie (which I guessed who he was already. Heh. OK, OK, so does everyone else) And there was a passing reference to Capt. Archer (now Admiral) where he did transported his favourite beagle somehwere else.

The Plot
OK, its nice. Some Romulan from the future got pissed off, went back in time by accident and decided to have his revenge on Spock, Kirk, Planet Vlucan and the whole of Starfleet while they're at it. And here is the clincher. The Black Hole which the future Spock created sort of screwed up everyone's lives in the past. So, this absolves JJ Abrams from any flak should the Original Star Trek fans feel offended. For you see, in this kind of movie, every fan expects you to stay true to the TV Series and not go off in your own personal interpretation (such as the flopped Tunderbirds in 2004, which was incidentally, directed by Jonathan Frakes).

Product placement
Oh boy, this is so funny. Nokia was the only brand I saw in there. Perhaps there are more. But I'll have to wait for the DVD to come out.

The overall feel
There is not a dull moment as every second is all about action, getting in character and yes, more action. The only thing I felt was stupid the monster chase on the ice planet and also, marooning Kirk there in the first place. Oh, and also the part with the Orion girl who is Uhura's roomate. Still, its a very nice movie. I would like to watch it again, provided someone gives me another free ticket. Heh.

Red Shirts
This time, he did asked for it. So, we have red shirts deserving their fate in the role of the Universe. Luckily, in this movie, I preferred the Gold or Blue shirts. 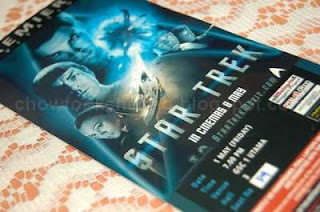 This is the ticket to the Primiere at 1Utama's new GSC
cinema. Most of the ushers looks new and were unsure
of their job. One tried to get a member of the Singaporean
Star Trek member to relinquish her thumbdrive. Here,
they torn my ticket instead of using a stamp or just a
Star Trek delta shield symbol cutter. 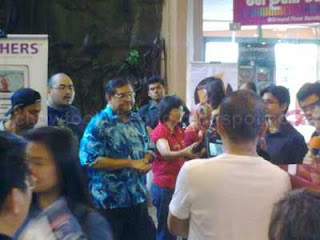 Prior to the actual screening, there were a lot of activities
as organised by The Oupost (MySciFiFan), All Malaysian
Bloggers, Gopher & Red.fm. I was there about 20 minutes
to seven and of course, missed everything. Not that I
wanted to but I was trying to rush on doing the BSG O2
sensor circuit until I realised I do not have an IC socket.
You can see Davin Arul giving out prizes. 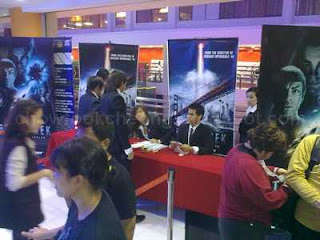 Yes, you have to check in your handphones, cameras, etc.
When they asked me if I have any other electronic device
I wanted to blurt out, "Yes, I have a Tricorder" only to
remember that I forgot to bring it with me. Oh well,
maybe in the next movie, I suppose. 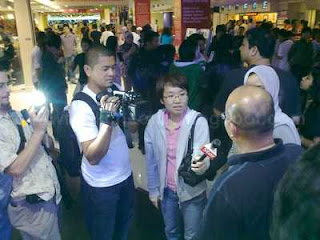 I do meet a lot of friends there, except for Peter and Kal.
They have all asked me how I am doing and its all so very
embarrassing to repeat my excuse that, "I have kids". You
see, after we got married, I sort of stayed under the social
radar quite bit, only popping in and out of Forums and
answering the occasional E-Mails. A few minutes ago,
these people were doing interviews and noticed a
Singaporean Star Trek member. Halfway through, I
pulled James's arm and led him to the camera
before disappearing. Maybe he's mad with me
now. Or Janice. Ha ha ha ha 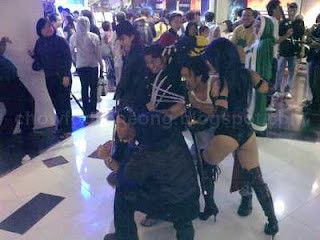 Some cosplay members for the Wolverine Movie. 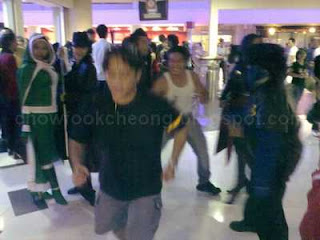 Too bad I did not bring my Nikon D50 as this shot was
so "priceless".

You know, after seeing this movie, I think I am starting to like Kirk, Spock and the gang.