I have managed to complete the software part of the LED display for the Phaser Rifle. At the moment, there are three switches:
1) Left Button
2) Right button, and
3) Trigger

In the software simulation, when the circuit is first started up, the rifle will not fire when you pull the trigger. The display will not work too. At this point, if you press the right button, you will get three short warning beeps. Only when you press the left button, will the display come to life, just like in the Star Trek:Insurrection movie:

It will start lighting up the LEDs from left to right, pause for a second before showing the rifle's power setting, which is the first LED (or, I think, is Phaser setting #8). At this time, pressing the left and right button will make the LEDs move left or right. Every press of the button will have a beep.

But if you move the LED too far right, it will give you three short beeps (beep. beep. beeeep) and too far to the left, you will get two double short beeps (beep.beep....beep.beep) OK, these parts were made up by me just so that I know when I have reached the minimum or maximum Phaser setting.
Once the rifle is active, and when you pull the trigger, there will be another circuit to light up the Luxeon LED for about half a second.

I am having problem with the programmer's compiler at the moment, so once I get this solved, I will build the circuit. Maybe later on, I'll explore on the "Overload" part. But I have to explore the "sound" part first. 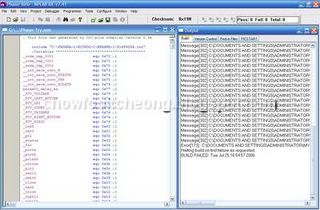 Now, if only the $@#&ing compiler compiles without error!
And I know nuts about this. Dammit!