Another milestone for Kaelynn

Everyone was quite happy last night as Kaelynn stood up all by herself without any help. And our clapping further encouraged her to try a few more times before she got bored and wiped the floor with her blue blankie 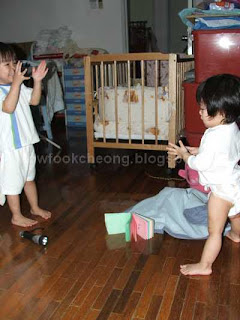 My USB cable broke and it really sucks especially when I was in the middle of programming the Panasonic PABX. So, since my customer was located nearby Section 14's Digital Mall, I decided to stop by at All IT Hypermarket. And then I saw those new headphones, the ones that looked like some mini tubes which you plug into the ears. This one was by A4Tech. The last set of headphones I had was from Sony and it was years ago. By now, the sponge has deteriorated, the wires have hardened too. Not only that, years of use has resulted in all the sweat from the ears leaking into the thing itself and I can see a lot of grime and corrosion. I think it was the early 90's Fontopia series which have nice bass. But because the sponge has gone, I have to keep pressing the earphones in order to hear those bass.

So, how does it feel with these new headphones on? Remember the time when you roll up wads of tissue paper, soak it with a bit of water and then plug them into your ears? And then, most of the sound around you disappeared and you're in a World of your own. You cannot hear most of the sound around you but you will notice that your breathing is quite "Heavy". not only that, when you eat/chew, you can hear your jaws too. However, the same goes when you move the heaphone cables about. I you say something, that is your real voice. I realised that when I recorded my own voice and layed it back from the iPaq.

And the sound quality? Well, imagine you're in a rubber room, all deafeningly quiet and then suddenly when the music starts, you feel as if you're standing in front of pair of bass speakers. Sometimes, most of the treble seems to have been absorbed within the rubber room. And of you listen to your favourite songs, you will not notice that you have shut out the World around you. So, its not a good thing when you're driving, at work or even when sleeping (really). But I really could not resist using them when I was driving yesterday. I realised that I tend to cruise more than usual and actually enjoyed the long drive. And when I was working on site, I tend to concentrate more and ignored everyone else there. Ha ha ha ha.But there is one thing that was new to me. The moment I unplug the heaphones from my ears, all the sounds rushed in and my ears actually felt cold (due to the sweat, methingks) 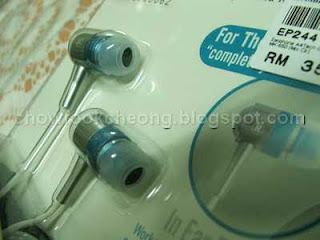 Of the three silicon sleeves, I went for the middle (Top) 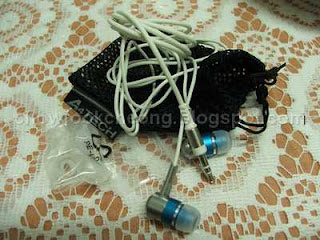 And here are the set. I like the design of the stereo jackwhich is straightforward

Here is a quick glance of the Firefly Rev-8 NERF gun. I had to come early to the office to *ahem* test and photograph it. The N-Strike (Enlist, Engage, Enforce, don't ask me why it did not start with "E") series of the NERF guns are wonderfully designed. It can be painted black (or whatever) and still would not look out of place in a Science Fiction (or real) movie. Of the N-Strike series, so far I have accumulated the knock-off Maverick, now the Firefly and soon, the Scout (on the way). The only NERF series which I did not have was the Longshot Rifle. The Titans and the Hornet was not my cup of tea although the latter has a very nice grip.

Anyway, after a few test rounds, I found out that this Firefly was very weak in shooting out the dart. I have yet to test the other three, but no matter, my plans to convert them does not involve shooting out darts. Hee hee hee 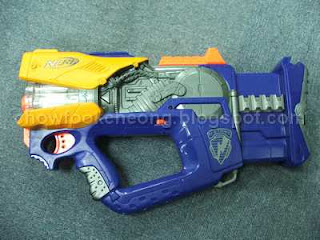 The Firefly is quite hefty and it fits quite comfortably in my hand, with the
butt-end against my biceps. 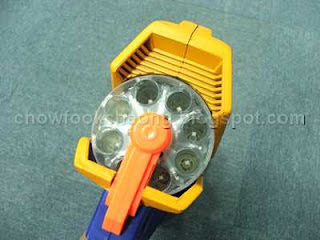 This is the front end of the rifle and as you can see, it holds eight rounds 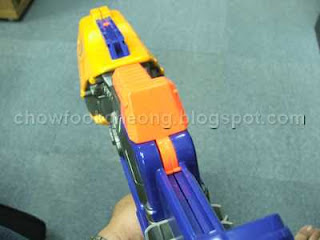 I loved the view from here. The orange part is to cock/load the round
You have to hold the rifle with one hand and use the other to slide it
towards your shoulder. You have to do the for every round
But that will change later.....

Oh, this is the reason why the darts are made of glow-in-the-dark
plastics. As you pull the trigger, it will set off a flash unit above the
barrel and make the dart glow. So, its like firing a tracer round. But
if you fire too fast, then there is not enough time to charge the flash
until another round has gone.

I was at Pasar road again. Just after my GDL test. This time, it was bulbs for my car. License plate bulbs, in fact. Just the other evening, it blew, no thanks to me. Usually, when that light was not on, I would give it a thump and everything was back to normal. But on that very night, it refused to light anymore.

Then I happen to come across the white LED courtesy light which sells for RM25.00. And for that price which consists of a circuit board, some current limiting resistors and white LEDs, it was a rip-off. But knowing me, if I want to do this myself, the project would see the light of day come 2009.

Anyway, since the courtesy light was easier to install, I did that first. maybe this weekend I would do the license plate lights. 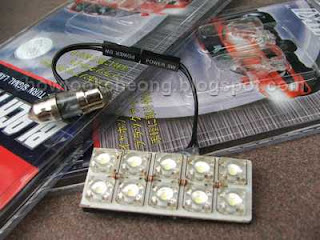 Its a very simple kit. You just replace the old bulb with this
connector. But make sure it is the right way round because
if its not, they would not light up 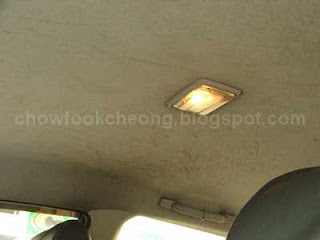 This is where the normal bulb was used 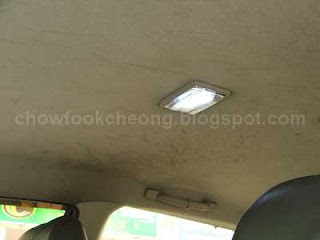 And this is where the LED was used. At night, it looked weird
but still brighter than the bulb.
Date: Thursday, August 09, 2007 No comments:

Can I kick it?

I got myself a new pair of shoes today, as I had some money left over after some budget calculations. I used to have one in 2003 and it lasted me for about a few years. These industrial safety boots are a lifesaver for me because of the places I go to. Many a times, if I wore normal shoes, my legs would have been badly done in with nails, sharp corners, etc.

I chose the Bluehammer BH-300A black version since the one in brown (BH-6688A) costs RM80.00 more. Its not the price but because of the zippers which I hated as when it comes to tough stuff, zippers just don't cut it at crictical moments. I could have opted for shoelace version but then again, that's just me. The shoes costs me RM118 or so but after looking at the final bill, it was RM108. This was because I was polite to them and they were also nice chaps. They were returning the more expensive brown ones as not much people buy them since the economy is getting slightly bleak. But there is a way you ask for discounts. For me, it was, "Boss, how much is this, ah?" even though the price tag was sticking out like a big poster. And to save face/much haggling, they will tell you the "discounted" price. Yeah, I hate encounters.

However, there is a problem. I was so used to the old pair of shoe which by now, have a very weak sole. So, after wearing it for the first time, I tripped myself at the steps, pressed too much petrol and also, damaged furniture (instead of the other way round) 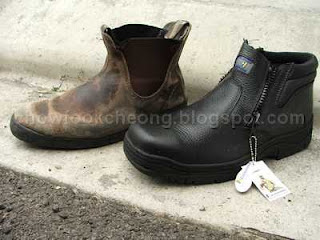 What is the difference between my "free" boots and the new boots?
Yes, one is breeds fungus and the other one is waterproof 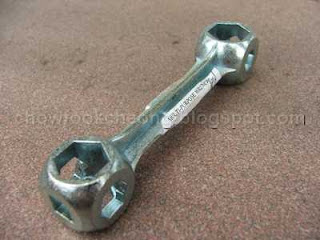 Oh, by the way, I bought this for RM5.00. Its a very
innovative idea for a tool. All the bolt sizes are there.
But i wonder how long it would last as I feel as if it
was made from normal die-cast material unlike those
expensive tough chrome vanadium stuff