While waiting for a client, we were parked at the roadside. And then there were these two boys walking past our car, with the taller one putting his arms around the other. I did not take much notice except when they passed by us later. Both of them were holding hands and the taller boy was holding a bag of bread. And they were in a jovial mood.

But by the time I took out my FujiFilm FinePix S5500, switched it on, let the camera adjust to the dim evening light and took the shot, they have passed me by. 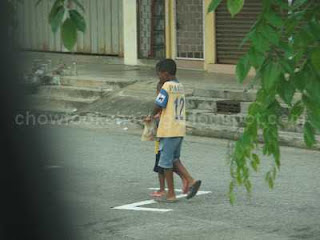