Today is Wednesday. We have a customer who needs to have an Earthing job done tomorrow and so, we need an Earth Tester. Normally, we do not do this because our job is to lay the Earth cable, thump in the copped rod to the ground and go home. But because we believe in doing things right, this meter is therefore, essential. And you cannot just buy it as if its a RM25.00 copycat meter. No, this meter is very sensitive and so, are we.

Almost three hundred meters to my destination, the car suddenly gave an very odd and familiar sound when I stepped on the accelerator in the traffic jam Yeah, the pistons were plinking. And suddenly, the car died. And so, stuck in the traffic jam, in KL and with nothing much I can do but to put in the hazard lights, I called my Boss to report the situation. And in times like this, you know that everyone is watching you and you'll feel very stressed. In other words, I nearly smashed my Nokia 5800 to the ground because it hang-ed halfway through the call. Luckily, I caught myself and used my backup Sony Ericsson. It seemed that the radiator has boiled all the water away. It was minutes after the call that I decided to try my luck again since I do not want my Tech to come over allt he way from Jalan Ampang to Jalan Imbi just to push the car. After a few times, the car started up again and I slowly urged it forward to the back parking lot, away from the main road.

By that time, while the engine was cooling off, I had a better grasp of the whole situation. But try as I might to deduce the clues in front of me, I have abosolutely no idea except for the fact that the car is in serious doo-doo. So, not wanting to waste anymore time, I let the car cool off while I walked half a kilometer to buy the Earth Meter before going back to my Office in Kepong. 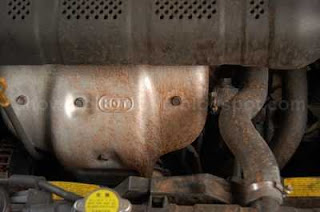 The brown stuff is actually the dried-off coolant. Once
you add water to it, it will turn fluorescent green again. 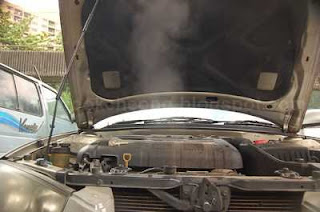 I got a bit impatient and poured the first litre which I
collected the water from the nearby draining pipe. 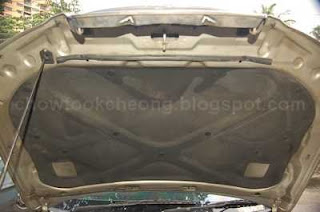 Something if very wrong here as sign shows that
the radiator spewed the coolant everywhere. 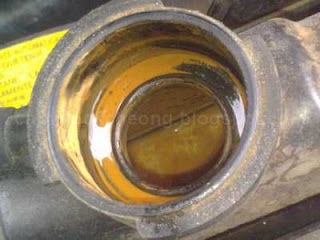 And the funny thing is, the car's dashboard's temperature
indicator did not show any problems whatsoever 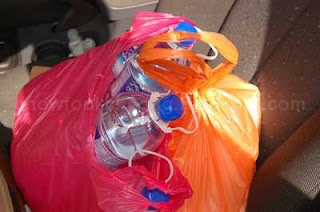 Just in case, my Boss told me to buy at least four
bottles of mineral water for the trip back to office.
He was right because it overheated again, just after
I passed by Brem Mall. One of the signs was that
the air-con, which I set a minimal cooling, got very
cold all of a sudden. So, being the wiser, this is a
sign that I have to pull over immediately, with
seconds to spare. Luckily, there was a customer
nearby and so, I saved two bottles of mineral water. Back at the office, my Boss took a look at the engine
and we were surprised that apart from the loose nut,
there was a rambutan skin and two pieces of bones,
which looked like some ribs. He did asked me if I did
any checking under the hood which I replied I did as
I opened the engine the previous week for some
topping up of windshield wiper water.......... 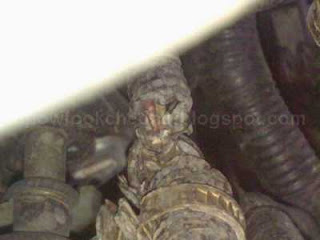 And also, chewed cables as well........
And so, I had to leave the Hyundai at the office while Boss gave me the Van to drive back home as I needed the transportation to go to Kuantan the next day.
Date: Wednesday, June 03, 2009 No comments: 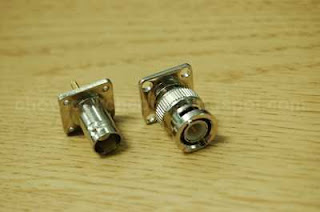 In my case, I wanted the project to have as little
cabling as possible on the outside. This is so that
the connections do not fail when being used. But
herein lies the dilemma. Almost no one in Pasar
Road sells this as they're rare. Luckily, in the
last minute, I remembered one shop which had
three left. And so, without being too greedy, I
bought two (as shown on the right). But the last
resort would be going to RS Catalogues which
would cost me four times as much, which I do
not mind but its the drive all the way to Shah Alam
Date: Wednesday, June 03, 2009 1 comment:

This is for digitalkl who wants to know what I (used) to do with SketchUp. The program is a very simple software which allows you to make 3D objects or design in the shortest time possible and you do not need to know anything about 3D software too. So, here are some of my uses: 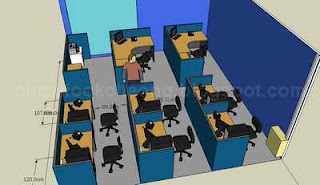 I did the draft in 45 minutes and a full one within 3 hours.
This is for a customer who needs to know about the
available space in their newly renovated office. 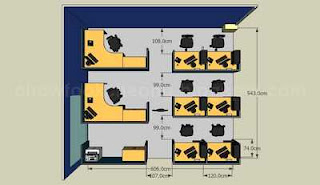 The same project but with an Eagle's eye-view SketchUp is so simple that once I scanned their
floorplan, I built their design from it. 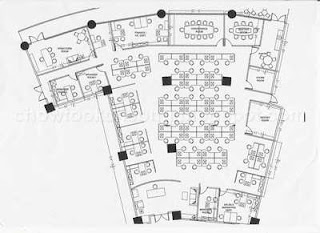 For example, this is the customer's floorplan
which I scanned it in and used SketchUp... 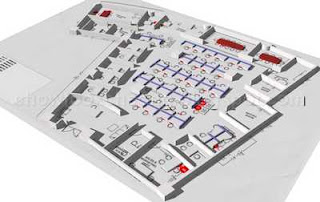 ..to build this to show how the tables would affect
the available space in the office. 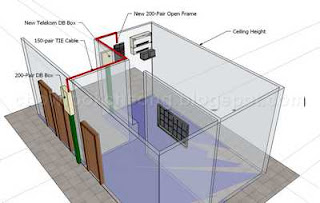 Here, I used this to propose to my customer about
the new cabling system 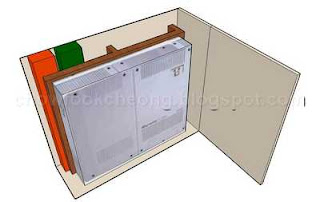 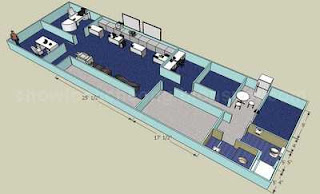 Office planing on seating and table arrangement,
plus space management 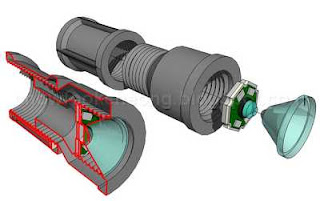 This is one of my design proposals for a Sci-Fi scope
which has a light source in it. 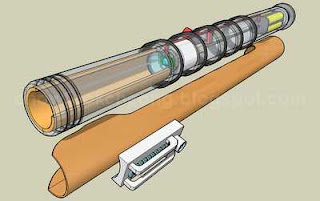 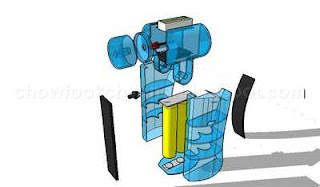 A Sci-Fi scanner, made from a toy fan 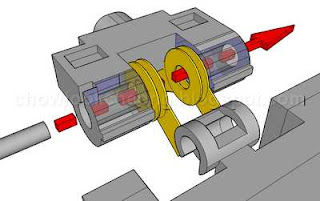 Explaining on how to use a hinge to fit in wiring 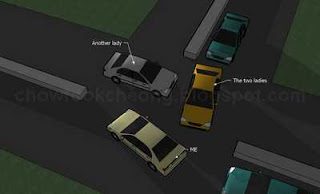 25-05-2009
After much deliberation, I decided to use this switch, which allows me to select one of the two functions. Its a rocker switch with an "OFF" position in the middle and is non-lactching. In other words, if I wanted to select to activate one of the circuits, I just press "I" or "II" and when I am done, I just lift my finger and it will return to the middle position. 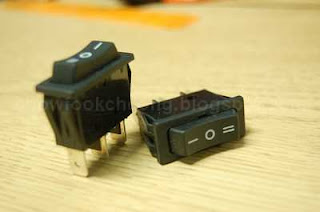 And then, I just remembered, it needs to be
double pole! Damn! have to got back again.
Date: Wednesday, June 03, 2009 No comments: 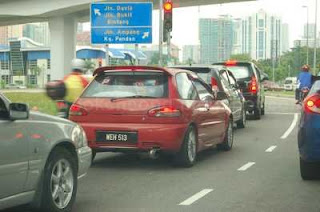 What if that person did not drive a Waja and got a Satria?
Date: Wednesday, June 03, 2009 No comments:

Treasures on a Sunday afternoon

After much reluctance, I agreed to let my Wife go for a haircut. I mean, I like long hair but in this hot season now, its not fair for her. And so, off we go, to the Salon of her choice in Old Klang Road. And so, while she had her hair cut, I wandered off for a bit as I know, there are limited choice of reading material in the Salon, from Crazy Master Q comics to women's mag to Chinese newspapers/magazines/flyers/crap, etc.

And so, I decided to explore the computer shop next door, which led me to some new treasures..... 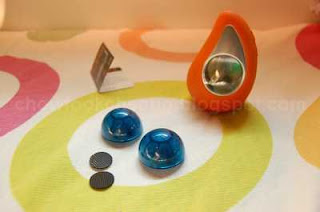 Half-spheres and a talking alarm clock

Talking Alarm clock
I always wanted one of these because (at that time and even now) I always hated trying to tell the time from my watch in the middle of the night. As your eyes are already adjusted itself in the darkness, any source of light would blind you. OK, in truth, I was just lazy to swing my wrist to more than 15º horizontal in order to activate the Casio Protrek's auto light. And so, this RM20 clock is a blessing. However: 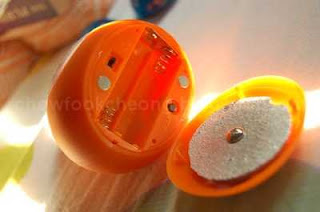 The cover of the clock is held by two magnets and some
alingment plastic poles. Its teardrop shape and so, when
you try to topple it, the tilt switch will close the circuit,
which would make the clock tell the time.
Half-spheres
Years ago, you can't get this anywhere except in the Apple Shop for about RM43 per set. AS I liked the idea of tilting my Notebook, getting a normal Notebook stand is not practical. For one, its not as portable as the Notebook, it cannot be folded in the bag and lastly, when you rests your hands while typing, the stand will shake about.

So, for RM10, not only does this solve the problem, but its so darn nice to play with it alone. I was about to get some mini bolster made but this really solve the whole problem. So, when my Notebook needs to breath, I just gave it some balls. 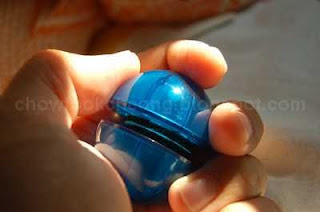 Hey look! A mini thermal detonator!
They also have beige, orange and also, erm,
otehr colours except metallic and black. 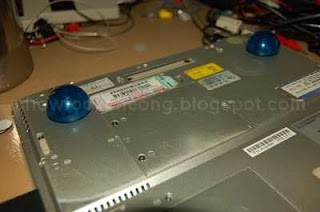 Its stuck via Velcro and so, I can take it out or
put it in whenever I needed it. Not only that,
when I push my Notebook around the table,
it won't shake. And this makes it feel so solid.
Date: Wednesday, June 03, 2009 No comments: