I was stuck in a jam and when I looked up the sky, I saw these amazing clouds which I could not resist in taking a few pictures. The funny thing was, there were no rain. Usually, when you see these clouds, there would be rain. 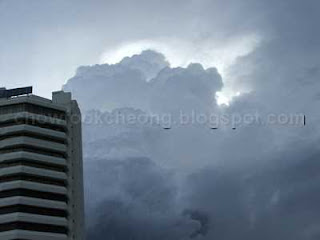 If you were there, you'd think there is going to be a big storm 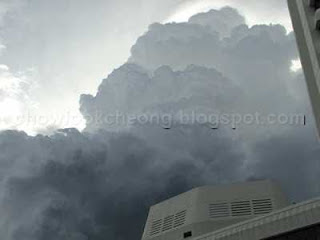 Or if you want, imagine the cloud is black and there is a big fire 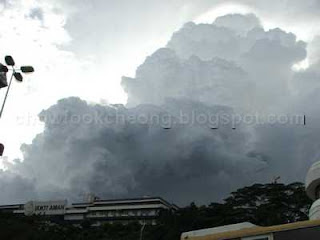 Yeah, the background is "Peace Hill" 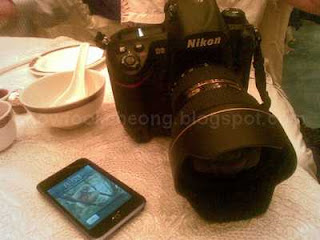 Since there is no word about my trip, I decided to take my
Wife to dinner and there, met a friend who was reviewing
the Nikon D3, which weighs a ton and has an iTouch. So,
it is not because of the RM17,000 price tag for the D3
but the heavy weight which makes me recosider in
getting any DSLR. Also the iTouch is nice to play
with but because its so slim, I am afraid I would
drop it more than I use it. Its fun but, nah
Date: Monday, December 17, 2007 1 comment: Links to this post

I got these pictures a week ago from my Wife's Nokia 6300. The two were in such jovial mood that they got on without fighting. Oh, an of course, each of them have a MacDonalds toy. 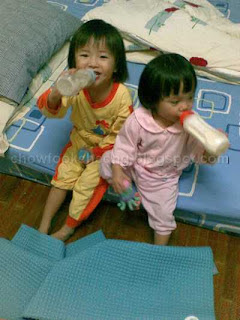 This is how you drink your milk 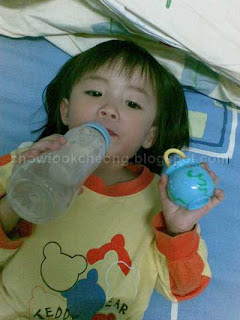 You drink, and drink 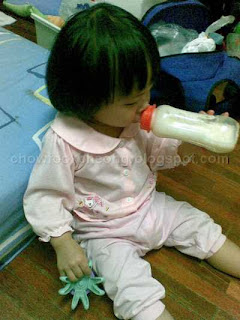 and drink and drink... 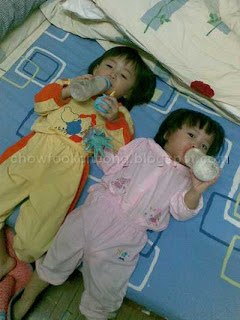 Instead of sucking more, you just lie on your
back and let gravity take over.
Date: Monday, December 17, 2007 2 comments: Links to this post

As I look at these images, I really miss my Tricorder which went MIA. It is one of the reason why I was attracted to Star Trek:The Next Generation. When you open the flap, the lights in the Tricorder would start to blink and it is a wonderful sight. But if you actually have the chance to encounter this prop, you might be disappointed that it does not have sounds that was present in the shop (it was mixed in during post production). And because of its design of the late 80's the functionality of the device is actually quite convincing at that time. The first time I saw the Tricorder from the show, I was fascinated with it.

This is a prop where most of the time, is used as a plot device in the show. The Tricorder is a portable sensing device which is crucial for teams on away missions. But to me, its just a box of blinking lights and sound. Yes, I must admit that I still love the concept of blinking lights in a box. I can't decribe the feeling but the closests is like tracking a moving item via a GPS device while monitoring its radiation, or something like that.

So, this will be undoubtedly my next project the moment I complete the Phaser Rifle. I dont have to worry too much about the project because, according to the Forum, if I am not mistaken, they have found someone from UK to do the electronics. So, I am not too concerned about it anymore. Anyway, I want to move on to this Tricorder project. Having dug up one of the toy casings again, it really got me fired up. But this time, I hope to do something different with it as its nearly 20 years now since the Tricorder MkVII made its first appearance and the electronics has been done by a lot of people. So, the project has to be a bit more oomph. Something, which I am confident, that I have again, bitten off more than I can chew.
Currently, there are three versions of the MK VII (or TR-560) Tricorder in the World: 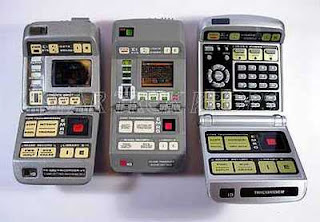 [LEFT] The original TV series prop: You can spend thousands of ringgit in an auction, get a propmaker to do it for you or buy it in kit form. You can also have electronics put in so that it lights up like the ones from the show. However, because of its "preciousness" most of the time, it will be left in a display cabinet or box. You must know whom to get it from or else you'd end up with a recast.

[MIDDLE] The toy from Playmates which was meant for kids but many adults grabbed them due to the "limited edition collector's item with serial numbers" gimmick. You can also get them from auctions. It is smaller than the original prop since it was designed to fit into a kid's hands. Still, it was the more "reasonably accurate" Tricorder at that time. But the elecronics in the toy left a lot to be desired. The only thing accurate was one of the three sounds was the Tricorder warble. Because it is made of soft plastic, you can take it out and play with it all the time, provided you do not scratch or drop it too much.

[RIGHT] A Japanese TV remote in the form of a Tricorder and nothing more. It is limited in quantity and therefore, the asking price is really reflects how serious you are into Star Trek. You can only take it out once in a while and show them to the correct appreciative audience.