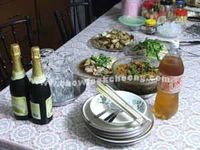 Here in Malaysia, we have a serious dilemma. Supposing your take home pay is RM1700. After paying for all the bills and necessary stuff like food, you'd be lucky if you still have RM400 to last for the next 29 days. So, while you're walking about, there is this latest Lord of the Rings DVD which costs RM89.90 which you have missed when it hit the cinema rounds because you did not have the money to fork out a RM20 ticket for both yourself and your wife. You'd be thinking, "If I start to skip lunch and breakfast...........". And then a few days later, sadly, your outdated Windows 98SE went kaput (and you cannot find the serial numbers and CD) and the price of a new Windows XP Professional would cost you a gut-wrenching RM900 or so. Without your PC, you cannot do anything productive nor help your career. Ouch. So, what would you do? In fact, what would anyone do?

This is what you can do:
1) Borrow money (Loansharks start to thrive)
2) Use your credit card (and you sink in to a deeper debt)
3) Pay for them by installments (good luck in your begging at the shops)
4) Borrow the stuff from your friends (This is highly illegal in some countries now)
5) Go visit Uncle Ho in any Pasar Malam (Night market) and try not to get shot (when you do not have the Internet and a CD burner)
6) Go download them from the Internet

Most people would have chosen Option #5 or #6. At times, when you're trying to download a popular or free software, you would encounter things like their server being busy, etc. This means, a lot of other people in the World are also downloading the same file. And you have to wait in line. Then came Peer-to-peer dowloading where you can search and download files from another PC. But its still very slow.

Now, came the Bittorrent revolution. This open source program works very differently because this protocol allows for a lot of other PCs to download the same file without slowing the process down. And those who are downloading, can upload their part of the file to other PCs who do not have this segment. This keeps going on until every PC has the exact copy of the same file. Hence the name torrent because when a new file is created, a lot of people would download it and the speed would first trickle and then speeds up into a torrent. In other words, this means, the more people download that file, the faster the transfer rate.

You can see how a Bittorrent file transfer works on this simulation here. 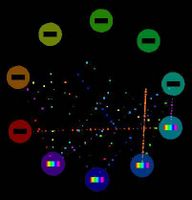 The circles with the "rainbow" in them are the seeders ("S") who has the whole file while you and I are the leechers ("+") who want download those files. Try with a one to one first and then once you understand, press "+" a few times and you'd be amazed. After all that has settle, put two or more "+" and see the speed.
Unfortunately, when I mentioned "files" they can mean anything from free software to cracked games to copied DVDs to recorded TV shows to scanned comics to MP3 to other files which irks those Copyright Fat Cats. That is why in the begining, P2P sites like Napster were closed (and then opened but with a lot of "challenges"), followed by other bittorrent sites like suprnova.org and others.

Copyrights have always been the problem ever since the cassette tapes came out. Then came with the Betamax and VHS (and their format wars), now CDs and DVDs which made Joe Public like you and me easier to copy the contents.

Bittorrent allows me to enjoy some TV shows which would never be shown here in Malaysia (if they do, it would take years and also censored) unless they're very popular, such as American Idol. It also allows me to read some old and out of production comics which a lot of comic collectors would never take it out to show. I would like to get them legally but the people holding the copyright material would never release or reprint it, citing a lot of reasons such as costs, collector's value, etc. Even if they did, the cost would be too expensive over here in Malaysia. I mean, buying a DVD which costs 10-15% of your salary?

Good or bad? Bittorrent is a tool and its up to the user. As a consumer, I am not bothered by all this ever since Madonna started with her anti-piracy campaign. I mean what the heck. I was buying CDs at an average of 3 per month, even if it costs me. By sticking to the original, all I got was:

1) Lousy return experience ranging from:
a) Missing receipt (OK, I did not intentionally lost it, and the shop knows its their CD)
b) Fault in the manufacturing process, "Sorry no more stock. Wait for a while la."
c) Sour faces

3) Artists scolding/blaming us for piracy when I was staying with originals. In the end, this pisses me off and this also say a lot about their image.

On the other side of the coin, the pirates here are different, not because the things they do but in their customer service, which a lot of shops lack unless you're buying CDs by the lorry load:

1) No quibble one to one exchange, all with a smile
2) Most of them know their stuff and would tell you which title is good or bad
3) Also, they will know your preferences after a few visits and would tell you which is a good DVD9 copy and from which "brand". This is a very good thing because it keeps the customer coming back for more as there are other unscrupulous pirates who aims are one-shot-selling.
4) Most popular words, "Buy it now, if you can't view/listen to it, come back and I'll exchange another one for you."

So, ever since Madonna and other shit Artists diverted from their creative jobs, I have stopped buying ANY original CDs to this day. Not because its expensive but because of their bad current anti-piracy image, which kills of any mood for listening to them. I am not buying a CD which has only one song out of 17 or so. For you see, although Joe Public is the one who is paying your salaries and supporting you, Joe Public does not like to be scolded out of the blue and Joe Public likes their products cheap, and in the fastest available time, regardless of the source. So, thanks to all these, Joe Public is now turning towards the other way. You Fat Cats have only yourselves to blame. Not the MP3 downloads, not the Bittorrent, not the file sharing but your inability to get off your butt to do something about it and win back Joe Public.

It would be nice to have the originals at cheaper prices and something special to counter those pirates instead of the normal "Imported" sticker crap to boost their prices. If this were to work, you would be able to buy the Microsoft XP Pro at a reasonable price which reflects your salary and not at American US dollars. I know this this topic (to combat piracy) has been discussed locally but the Fat Cats are keeping quite about it because this means less profits for them. I do not think they know much about the repeating customers concept which the pirates have so successfully cultivated for the past decade.

At the end of the day, you can clearly see who wins in the long run.
Date: Sunday, March 06, 2005 No comments: Links to this post

Ok, its not Toys but toy since my paycheck is still not out yet. So, this evening, my Wife and I decided to go shopping for more baby supplies at 1-Utama. This is the second time in weeks we got to go out by ourselves whithout Kristine crying. But we were rushing with the shopping as Kristine needs to be fed soon as she has reverted back to the 2-hour interval feed. So, I thinks its more of speed-shopping.

While she was doing her shopping, I wandered off to the Toys section and came across Hotwheels's latest products: 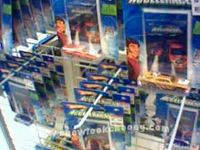 The Acceleracers are already on the shelves, costing RM9.90, 5 ringgit more from the normal Howheels. 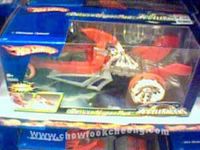 Here are some accessory for the Acceleracers 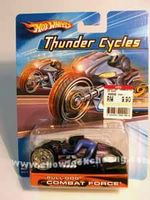 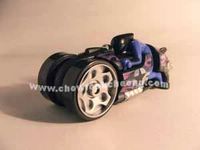 Its the latest ThunderCycle series and this one has two front gigantic wheels.
It either looks more like a steamroller or the half-front of the Dodge Tomahawk 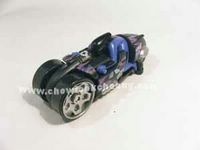 Another shot from the top. Looks like a 1/53 scale, which I can modify the rider from some Tamiya model kit. Pity I used a 400ISO setting. Must be getting sleepy.....
Date: Sunday, March 06, 2005 No comments: Links to this post