Just what the Doctor ordered.(heh)
I decided to sit down and watch a/some movies. One of them in particular were the Harold and Kumar series which I got it sometime back, just as soon as I read some comments about John Cho when he was given the role of 'Sulu' in JJ Abram's 2009 Star Trek movie reboot. Right now, there are only two movies made with the third coming out in 2008. But alas, it did not happen because John Cho was busy with Star Trek and Kal Penn, in his April 2009 announcement, is now furthering his political career as Associate Director of the White House Office of Public Engagement. So, there goes his role as Lawrence Kutner in the House TV series too, which, as usual, I did not get the chance to watch. Anyway, I am still not sure why they're so famous even though I hardly necognise the writers. I mean, I did not know they did "Dude, where's my Car" and I did not even know much about the movie except for some revoltingly sagging grandma breasts and a fainting dog. Ha ha ha ha.

Harold and Kumar goes to White Castle (2004)
This is the first of the two movies. Harold Lee is a shy and insecure guy who works as an analyst while his best friend and roomate, Kumar is well, the opposite of Harold. But we learn later on, Kumar is a Medical genius but who does not want to be in the Medical Profession. He's only there for the interviews to please his Dad or he will be cut off. Anyway, Harold promised Kumar that they will have an evening of getting stoned but during the last minute, he was given 'extra' work from his shirking workmates. And so, in that evening, after getting stoned, they saw the 'White Castle' ad and their real adventure starts from there. And yeah, someone got the girl too.

Its quite a funny movie and more like a 'journey' type where after their journey, everything worked out well and Harold changes. But there are some moments which really made me laugh out loud despite the blatant nudity and strong association with drug taking:

1) Kumar's pubes and Harold's scissors
2) Getting the cheetah high and what they did afterwards. 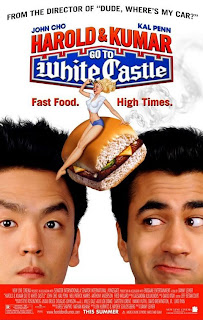 Image taken from www.impawards.com
Harold and Kumar Escape from Guantanamo Bay (2008)
This is the sequel and could possibly be the last movie despite the producer's enthusiasm. As both actors have gone on to different careers. Apart from the normal nudity, drugs and racism, this movie now centres more on how racism and terrorists are linked together. The second movie takes off right after the first where Kumar has booked a flight for the two of them for Harold to go Maria after since '10 days' was a bit too long. The 'journey' starts when Kumar decides to have a joint in the plane with his new smokeless bong invention. One thing led to another, his 'bong' became a 'bomb' and the duo were sent to Guantanamo Bay as terrorists. The only way to escape is to get help from Colton, who is marrying Kumar's ex, Vanessa.

Here, we learn more about the character's history and the highlights:
1) How Kumar became who he is from Vanessa
2) What Kumar did to Harold's toothbrush
3) Smoking weed with the President
4) The Square Root of Three 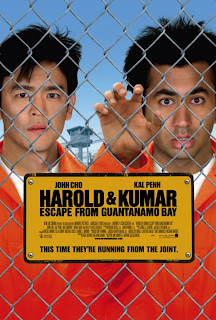 Image take from www.collider.com
And here is the touching poem (OK, I think its brilliant), as reveal to Venessa by Kumar which is very nice (this was taken from David Feinberg, who wrote the poem)

The three is all that’s good and right,
Why must my three keep out of sight
Beneath the vicious square root sign,
I wish instead I were a nine

For nine could thwart this evil trick,
with just some quick arithmetic

I know I’ll never see the sun, as 1.7321
Such is my reality, a sad irrationality

When hark! What is this I see,
Another square root of a three

Has quietly come waltzing by,
Together now we multiply
To form a number we prefer,
Rejoicing as an integer

Email ThisBlogThis!Share to TwitterShare to FacebookShare to Pinterest
Labels: Movies

The return of an old friend

And so, I gave in. The pain is unbearable and worse of all, it has spread. It all started on Tuesday night which I did not notice until the next morning. I knew it wasn't a sprain because I haven't been exerting myself. Heck, for the past few weeks, the most I could do was to work up a sweat by just walking. Anyway, fast forward to today, I woke up with pain on my wrists. Yeap, it seems that the Gout has gone from the legs to my hand.

And so, I gave in. I mean, everyone was asking when I would go and see the Doctor. Actually, I hate going to the Doctors mainly because it costs money. You go there, tell you sob story, get a painkiller jab on your butt and then beg for M.C. on the way out. But no. Not this time. This time, I am going to go in there like a man who has Gout. I will go in there and tell the Doctor I have gout and no sob stories. And then, well, if I can, I will walk out like a normal person.

That is, until the got the wrong patient card. I told the Doc, "That's not me." and he looked surprised. "That's not me." I repeated. They (the nurses) got my card wrong. And so, he called out to the Nurse and got the right one. 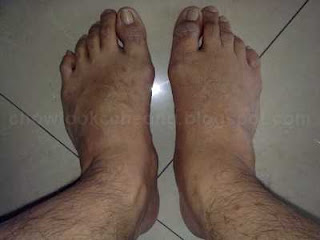 "So, what's the problem?" asked the Doc when everything got sorted out. "I have Gout.", I admitted. "Have you have this before?" he asked.

It was not his fault as he has never seen me before and I did not visit the Klinik so much, thanks to my Wife's cooking to make sure I stick to the diet. And so, I summarised, "Yes, I have this since the late 90's and I come here as much as a few times a year.", without tolling my eyes at the ceiling.

"Have you taken Xyloric before?" he asked. "Yes, since 2004." I replied. I know this so-called expensive but wonderful drug which sort of keeps the uric acid level low. But I do not like using me because a lot of sufferers just take them before a 'Danger' meal. I mean, its just to keep the attack at bay while you go on binging on the Sin food.

"Really? Why?" He looked as me as if I had rabies.

"Because my Wife is a wonderful cook." I replied, beaming with pride.

I explained, "Well, OK. Because I controlled my diet to mainly veges and chicken meat". "Oh. Very good, but now this happened? What happened to your diet?"

Sheepishly, "Oh, I drank some alcohol.", "Tsk tsk tsk tsk." he looked down at his Notepad.
"But the sake is delicious!".

"Its the 14% wine that I have trouble with. I got headaches and all from it."
"Or, it could just be the prawn soup I drank." I continued.

"OK, can I see you hand? Yeah, just unwrap the bandages" 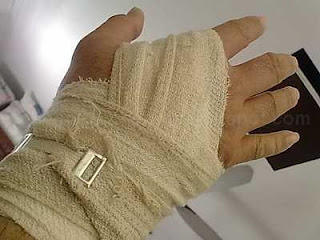 He had to ask after seeing my slightly swollen foot. And so, I unbandaged my hand for him to examine. And he told me to clench into a fist and some other test before feeling the hand.

"This is just acute and so, for the time being, I'll prescribe some pain-killers for you and some anti-inflammatory medication. You should take two or three days of rest, watch some movies in the Bed and so on. But after that, I want you to take Xyloric. Now, its too painful and might just increase the uric acid level in the body."

"Uh-huh. Well, this 'acute' thing, is it because of the liver?"
"Why?"
"Every morning, when I take my first piss, its dark brown"
"That dark brown is you not taking lots of water"
"But I drank 2 litres everyday. " He looked at me as if I was lying like a small kid.
"Really."
"I have Gout myself too.", he admitted. "So, you want the painkillers now? I can give you a jab...". I know where this going and said, "Uh, no. I'll take it orally this time. I have this fear of the needle breaking halfway inside my butt." (OK, so its not true but jabs sure cost extra.) 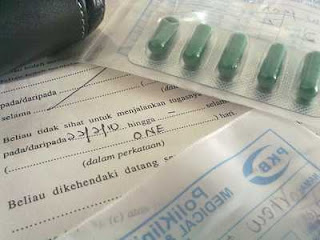 "Well?"
"Well, I went in, talked to the Doctor and got my medication. He said I should rest for a few days, la." I said as a matter of fact.
"Did you get an M.C.?" She asked. Damn! I frogot about the M.C.
"Nah, with these painkillers, I should be up and running soon."
"Go get it. You can cancel it when you're well"
"But... but..."
"Go. Afterall, you have paid for them"
Sigh. And so, I limped back to the Klinik and 'begged' for an M.C. which the nurse. I hate this because asking for one is like begging for it. I just hate doing this because it sort of shows everyone that I am lazy or something. Or maybe, its just me.
Date: Saturday, February 20, 2010 1 comment: Links to this post