By hook or by crook, we need to go to Popular bookstore so that Kristine has enough workbooks to prepare her for her coming exams. Initially, we drove to Jalan Tun H.S. Lee since Popular's website listed it still as one of their branches. How wrong we were because by the time we arrived, the building, which was called Wisma Wawasan, looked very run-down and from the outside, crowded kiosks meant that the is a very high chance that the bookstore is no longer there. So, once again, I have to keep my guard up with local websites which have problems when it comes to regular updates.

By the time we reached The Curve, it was already raining very heavily to the point that it was a very good idea to give up and go home just in case one of the trees get uprooted by the strong winds. And looking at the sea of cars queuing at each parking entrance, it was already very discouraging for me. That was, until I remembered that there is a car park still 'unknown' to a lot of people at one of my customer's office. What was so appealing was that once we entered the building, it is connected to the Curve's Cineleisure and IPS (new name for Ikano), 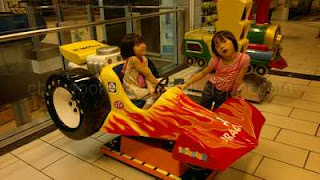 After buying all the books, it was time to go home but
before that, we used the normal way of escalators so
that we can have a look at other shops on the way to
the bakery located in the basement. 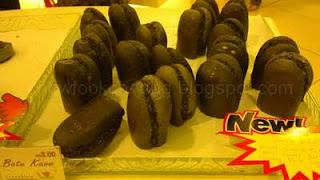 Someone has successfully turned bread into the
new black. And boy, it looks unique but for the
price it is asking, I decided not to get it. And it
was displayed out on the open, near the doorway
which, well, like any other curious person, they
would be picked up, smelled and subject to a lot
of fondling which, in my terms is not delicious. 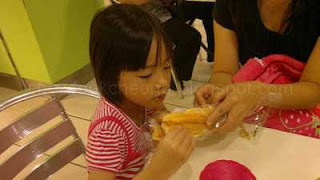 Luckily, the girls passed and went on to normal pastry. 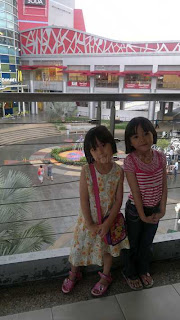 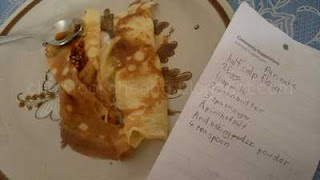 After coming back from her Martial Arts class, it
was time for me to catch up with my own stuff;
mainly my lunch. Not sure how Kristine did it
but it sure was delicious!
Date: Sunday, April 24, 2011 No comments:

Since I has some time today, I decided to have a more detailed look at the Falke. To me, although it is 1/20th scale, the model is still very big. Then again, I am not sure why I am making such a fuss on it. Sure, the main body has the biggest single piece I have ever seen apart from Polar Light's 1/350 Enterprise 1701-A and NX-01. But them again, Ladies and Gentlemen, this is Machinen Krieger (or Ma.K) we're talking about.
This kit is produced by Hasegawa and comes as injected moulded plastic, something which I feel very comfortable with. Of course there are other alternatives which this model could be made in, such as resin, vinyl or even vacuum-formed. But I have my problems with these since I have not mastered them nor like them very much.

Then again, plastic is, to me, easier to work with since I like the details on this model and I would very much like to light it up (not again). 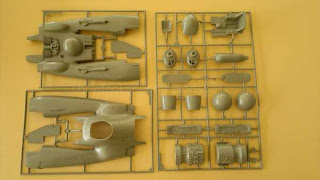 These are sprues A, B abd C. Note the rear thrusters
which is located on the bottom right. 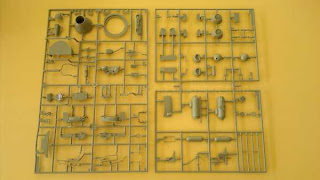 And these are the D, E and F sprues. Nothing special
about it until you see the seat details. 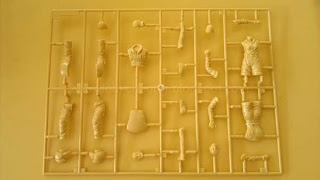 But before we do that, this is the picture of the last
sprue which are the parts for both the pilot and a
girl as an 'extra'. They both have extra heads and
the one for the pilot is very nice, which I can use
a LED or some fibre optic to light it up. The wires
can go through the body as they are actually
hollow. 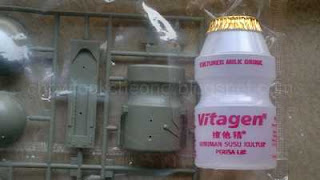 Coming back to the rear thrusters, I took this pic
much earlier. Notice the difference between the
model part and the Vitagen bottle? Bruce theorised
that there is a possibility that the Vitagen being sold
in Japan could be smaller compared to the ones on
sale here. So, who is going to Japan, please get me a
Vitagen bottle, OK. But wash the bottle first. 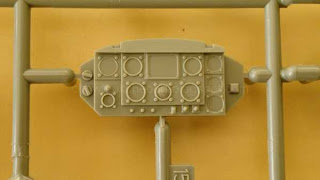 This is one of the reason why I am starting to
warm up to the Falke instead of the Lunadiver.
(Of course I still want a Lunadiver). The detail
on this front dashboard says it all. Imagine how
it would look like when it is lighted up by a LED
from the back and maybe, some fibre optics for
that blinking effect. What? You can't imagine it?
Neither can I because I have yet to think up of
its colour scheme. 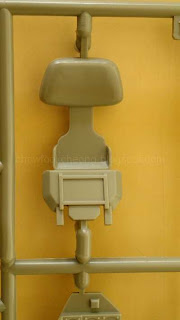 This other part, which is the underside detail for
the Falke's cockpit cover, was a possible seat for
the Pilot. I said was because it was just a wishful
thinking because the actual seat... 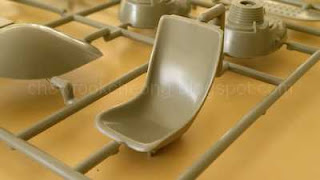 ...is this one. Very plain and very.... well,.... buckety.
It lacks detail and looking at it, it does not look very
comfortable at all. 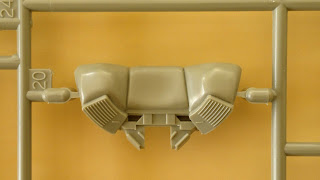 Now, this is what caught my attention. The seat's
headrest. If I were to turn this upside down, it
would look like one of those arcade headrest that
uses the Q-sound stereo speakers very common
in the late 90's. To me, they're just loud. 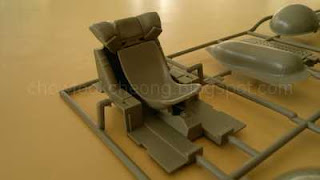 In case you cannot imagine, this is what I wanted it
to look like but them I would have to modify the
seat to accommodate the change. 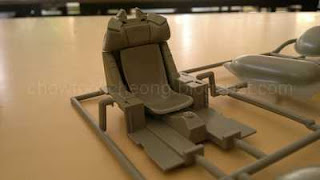 So, I just had to settle being a good boy and follow
the instructions on the manual. Using the parts for
the pilot, I did a mock test and from what I can see,
the seat is very uncomfortable as he literally need
to crouch inside that seat. 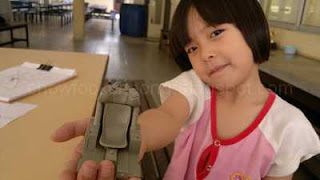 At 1/20th scale it is very big. Personally, I think this
is the main reason why I like the Falke. The seat and
the cockpit's dashboards was just excellence by itself.
And if I were to do such a thing, this is the part which
I would start first and build the craft from there. 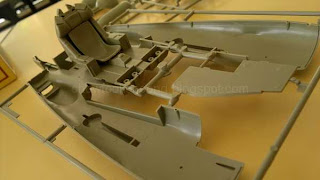 Test fitting of the seat onto the lower part of the
Falke's fuselage. In the instruction manual, it says
that you'll have to place the pilot in there first before
you seal up the two halves of the fuselage. This is
going to be a problem as I am still undecided if I
want the pilot to be in there or not. 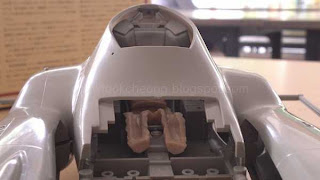 The proof is evident in this photo. Once the two
halves are glued together, there is no way you
can remove the pilot figure in or out due to its
fixed sitting pose. So, this is going to be a
problem later on. 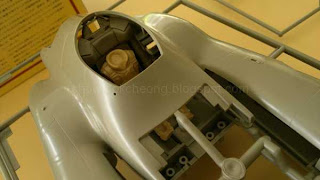 Although it looks nice, but I can't help the feeling
how ugly it looks from the side. This is because
although the model looks nice from the top and
also head on, but for me, it looks very bad from
the side. I will have to do something about this. 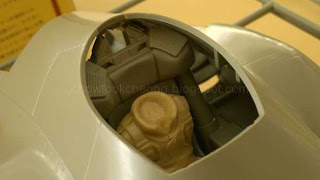 And once you have the pilot in there, the whole
cockpit would look very cramped. This is how it
looks like, without the head and the dashboard
panels on the side and the front. 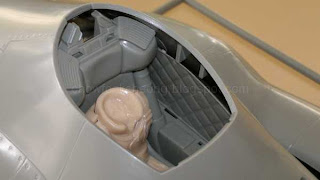 With the sidewall (or is it fireproof insulation?) in place,
I can cover up most of the unwanted area inside since I
have no intention of putting anymore details inside. Like
Bruce said, once you close the hatch, whatever detailed
work you have done inside the cockpit can't be seen.

So, there is a problem with my Falke. Should I do cockpit details or just leave it?

1) With Details
I can light up the dashboards and also the Pilot's helmet plus some ambient red lights in there. Maybe put in some glowing and flashing lights would make the cockpit look nice. This would also mean I have to do some seat-belts too. And how to do this? My original plan was to show the Falke shot with aircraft machine gun with the pilot mortally injured while some extraction team was tying to set him free. Alas, Bruce said this has been done, but with a Lunadiver instead.

2) Without details
I can just put in some missile pods and call it a day because, without the details, I would now have the cockpit parts! Woo hoo!

Or, I would just wait for an idea to come by and also at the same time, look for spare cockpit set. Anyone has this that they do not want?

The Rabbit, the Cat and the Mouse

This style is very similar to Kristine's and this is natural since Kaelynn is younger than Kristine and so, copies whatever she does. But, this is the first time I have ever seen a rat and a rabbit drawing from either of them. 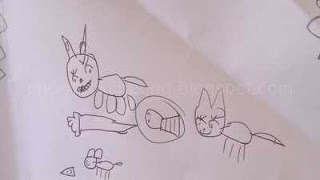 The rabbit (top left) and its carrot. The rat (bottom
left) with its cheese and well, the cat on the right
with nice eyelashes. Heck even the rabbit has some
eyelashes too...
Date: Sunday, April 24, 2011 No comments:

In the last few moments, Kaelynn decided to follow Kristine and I for the Martial Arts Class. Before I would let her follow, I asked her what she wanted to do to while away the time and she answered that she wanted to do some drawing. So, after she has collected her stuff, we started our journey. 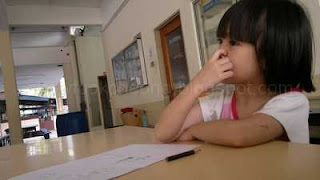 Kaelynn looking for inspiration for her next
masterpiece. She is very similar to me but
there is a slight difference in the sense that
I dig my nose instead of scratching it... 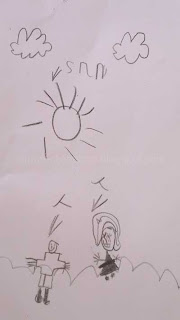 I like her style. This is a far departure
from when she was 'copying' Kristine's
style. Here, there is a bit of a similarity
because Kristine drew in that style too
but when you look at the faces and head,
this is very much her style. 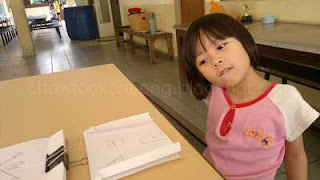 Her next piece was to make a house. Which, is very
pretty too. But because of the fan above us, it was
very hard for the house to stand upright. 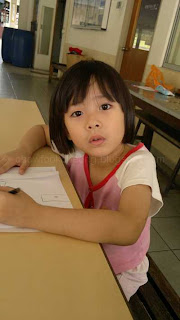 Next, she wanted to draw
something good. How? 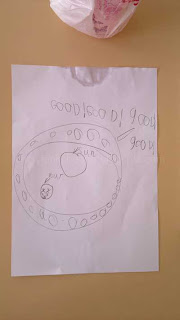 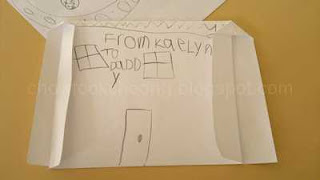