Why is an orange green? 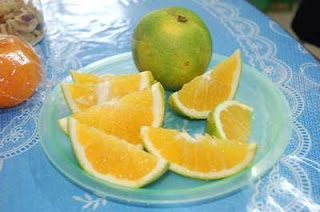 Wife said these oranges were from Cameron Highlands
and they're been having them for years. Wel, for me its
strange that an orange with a green skin was ripe. So
much for calling an orange, orange. I can't call it green
now. Maybe orgreen might be a better name........
Date: Saturday, February 27, 2010 No comments:

Woo hoo! Its Saturday! And so, as early as 9:00 AM, I woke up and straight away drove to Pasar Road. Its a wonderful feeling going there in the morning as the shops are just opening and there were not many customers around. So, I get to get my things to the counter fast and also, have enough time to look around new things which usually want to buy more things. Heh.

There is also another reason why I need to go there so early. One, its a Saturday and so, a lot of college students would come into the shop, with their pick lists which tend to take up a lot of the staff's time. And secondly, when it comes to Saturday morning, its a very beautiful feeling and you feel you need to finish things as soon as possible so you can move on to other things on your list. 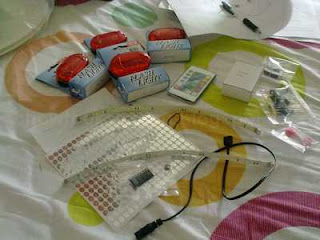 And so, for close to RM200.00, I got some LED bike
lights, LED RGB and White strips along with a remote
RGB controller, more programmable chips for the
Navigation & Strobe Lights project, QC stickers (yes,
they have QC and warranty stickers there), more
components for Kal's Boba Fett Chest Display and
some SMD components as I am now going to design
the second circuit for the 1/350 Enterprise:Photon
Torpedoes....

The RGB Controller
While I was there, I bought a White LED strip just to have a look at nexus's Celestine project. But its not the right solution because as Rm25.00 per strip and we're talking a minimum of 18 strips, the budget is Rm450.00 or thereabouts. Moreover, I am not too happy about this either. It does meet the required brightness as compared to Electroluminescent wires but I could be much more expensive. The other way, I could do is to buy 216 yellow LEDs and build my own. However, because of the 1.5 inch thickness of the whole thing, each side has less than 0.7 inch. And because LEDs have a very narrow viewing angle, I would need more LEDs closer to each other or else the frosted tube would show spots instead of a long beam of light.

So, while looking at the White LED strip, I noticed that have an RGB version as well. The RGB is where all the three RED, GREEN and BLUE LEDs were manufactured in a single LED chip. But in order to create or mix them to give a certain colour, you will need to adjust the voltage/current for each RGB component. And so, this is where PWM comes in. And also, this is where my next next next 1/350 Enterprise project will be based on. The module takes in a standard 12 volts and everything else is done for you. 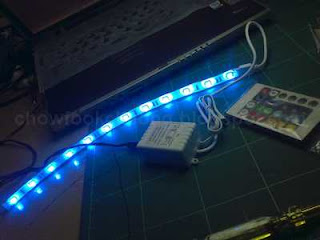 Knowing that it would be some Saturdays before I
come again, I just went and bough it. But luckily, we
test it as the shop and he said that the wires inside the
controller must be crossed since the colours did not
follow the remote 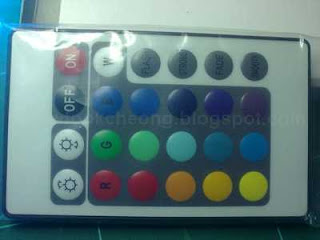 This is the remote which allows you to turn the
controller ON and OFF, different colours of the
RGB, its brightness and also, different flash or
colour modes. Which, to me, it cool. 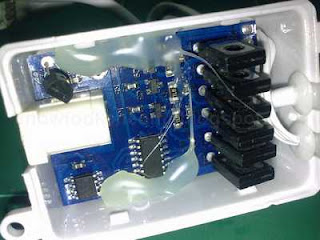 The controller box's underneath has a cover which
could easily be prised open. Initially, I did not want
to but because it stopped working after I got it home,
I had to open it and there, discovered a dry solder
join to the voltage regulator. 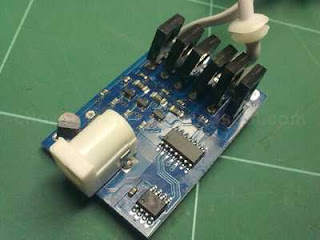 And just as I suspected, its using maybe a PIC chip
with a normal voltage regulator, some transistors
and also an IR remote receiver. This means I too
could have done it but this would take months to
achieve such feat since my PWM programming is
still very weak. But all is not lost as without a real
teacher, this is an essential tool for me to learn all
about PWM. Yeah, this circuit can be reverse
engineered but not the chip's programming which
I am not too concerned about. 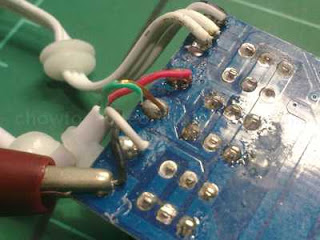 Since the controlled is opened and I got the power
problem solved, its time to look at why the LED
colours did not respond to the remote. Yeah, why
turn off an already warmed up solderin iron? Heh.
Using a multimeter, I figured out which cable were
for which LED in the RGB assembly. 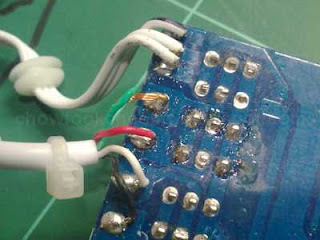 And after I resoldered the two wires into
their correct places, the circuit was ready 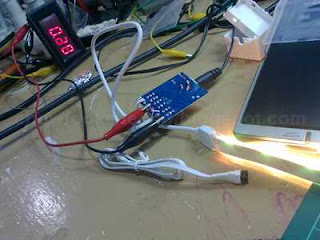 And why stop there? One of methods how a PWM works
is how much voltage/current is supplied each LED of the
the RGB module. This way, you get the colurs you want.
So, using a 'calibrated' digital meter, I got all the voltages
measured for all possible colours in the remote, including
the 8 brightness levels. When I meant 'calibrated', it was
the only measuring device which I deemed was accurate
enough as both my Digital and Analogue meters game me
inconsistent reading. This Digital meter, although the
voltages jump about, got me a close enough reading. One
day, maybe I should get a proper (read expensive) Digital
meter for my projects, apart from a proper Power Supply
Here is the Video, you might not see it properly since the Nokia 5800 could not capture the RGB LED's effects like a human eye.