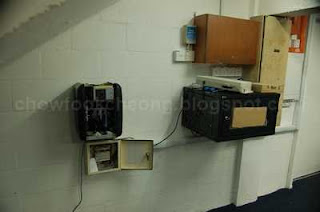 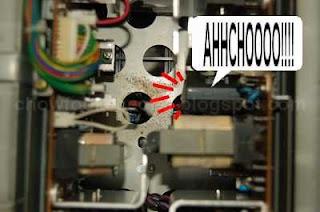 Further diagnosis revealed subject to be experiencing
severe fits of sneezing, with mucus everywhere.
(Pls refer to stain on the floor) 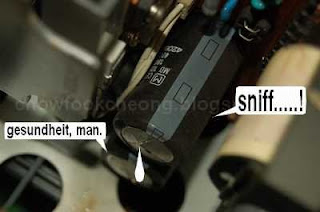 Until further notice, subject has been taken to
ICU for further observation.
So, when the dealer called me, it was already past lunchtime. It seemed that one of their customers had experienced "System Down". Unfortunately, this is one of the models I am familiar with and so, the job was assigned to me. Also, so save time, I have to wait for my tech to arrive (instead of me driving all the way back to the Office) so that he could deliver a spare system to replace the current one. We're taking no chances as then it comes to System Down situations, we always have to prepare for the worst.

Seems like the TNB was the culprit because apart form the destroyed PABX, their air-cons and network were gone too, not to mention some other electrical equipment and PCs as well. As usual, TNB absolves from all blame. Putting in the spare PBX is no use either because the customer's tech said the voltage is running at 249v AC instead of the usual 220-240 volt range.

Amid the acrid smell akin to a hospital disinfectant, I knew the system was not going to make it. Its two main capacitors have blown. When it comes to blown capacitors, its a serious sign (in this case) that the power supply is gone and maybe some interface cards too. And yo do not want to be there when it happens. The sound and pyro effect might be dangerous but in this case, since it is housed in a case, all you would every notice was some firework cracking sound, minus the shrapnel.