Kissing at the Lights
Done something stupid today. And it was something I never expected. I was at the traffic lights and I was a bit distracted with stuff under the seat. And, so, to cut a long story short, the car rolled about five feet into the back of a Wira's bumper. I hate accidents like this and I was sort of hoping the driver in the front did not notice. But noticed she did and she came out and started this pissed-off encounter.

Not even a greeting or even bother to ask me how MY car was. Yeah, this is the angry-I-don't-care-mother-with-no-nonsense-fleece-as-much-as-you-can attitude. So, I told her to exchange contact information and right off, she starts to ask if the phone number on my card is valid or not and calls it straightaway.

"How come you're not answering the phone? Is this correct or not?, so I just told her, "Its in the car, let me go in and get it out"

No fazed, she starts babbling about her bumper not having any accident and now, I have totally destroyed hers. And she wants it replaced. Bla... Bla.. Bla... Not listening to her, I start to go back to my car and took my camera out, taking photos of the bumper from every corner. And when she realised that, she kept quiet. I then told her that since this is a company car, I would have to report to my Boss and in the meantime, I told her to go to a workshop to get a repair quote. (Which she did, but at HER workshop)

Later on, just when I arrived at the company, there was some mysterious person who called and asked (I suspect) for me. However, either her mobile phone connection's n good or she cannot read, my name was mispronounced and so, my clerk hung up on her, saying "No such person". Ha ha ha ha. But in the end, she called on my Mobile and my Boss, now fuly aware of the incident and having seen the photos, took my call. It started out nice as my Boss was willing to help but since there was clues as to the car's bumper having been in an accident (with a motocycle), it was suggested that both parties go halfway in terms of repair bill. And year, minutes later, my Boss told me to go to HER workshop, and try to negotiate for a RM100 repair, with a last offer of RM150. If if that fails, go make a Police report. "This is the kind of money that you cannot pay with full satisfaction.", he says. And he handed me the cash even though I said I would pay from my own. "MY RM150 and no more" was the final say. 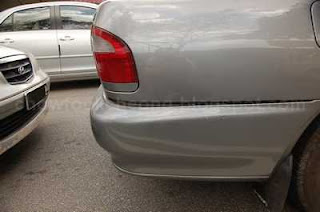 You want what? What about the two holes here? Is that a repair?
Oh, I see, a motorcyclist went and kissed it.
A Proton Wira and its variations have very weak bumpers both in
the front and back. As the car ages, the plastics would degrade. 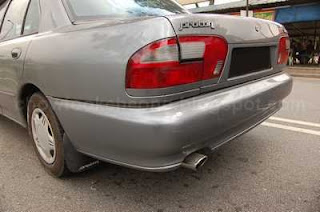 Do you see any difference if I did not tell you about the bumper?
And the second clue is, it you have not been in an accident, how
do you know about the bumper's inner metal and its workings.
How did you know about the costs as well?
At the Workshop
And so, after numerous missed calls from her, (because I was looking for the workshop without the handsfree) I arrived. Since she was the only person there, I came out and quickly look at the bumper on the floor. And I quickly took pictures of them. When the mechanic came, I asked him about the damage. And he proceed to tell me about the tabs and how difficult it was to repair and so on. When I persisted about the side tabs twice only did he answered the question that it was involved in an accident. "My car has not accident, only some motocyclist knocked it". Right.

And so, looking at the bumper carefully, I told her that I only have Rm150.

"Listen, this is my final offer, RM150 and that is all I have, I know this is an accident and I am very sorry..", "Sorry? What do you mean sorry? What about me? I have wasted my time here Bla.. bla.. bla.." Yeah, she can out talk me and I am already pissed off even though I am talkning calmly. By now, some of her "friends" have gathered around. So, I asked her, to "talk" to the mechanic in front of her to reduce to RM150 whch the guy nonchalantly replied, "RM200, la. Already discounted a lot" and without really trying, she just stood her ground. No RM180, No RM175, no nothing.

And so, with the final round of negotiation, she still would not budge from her RM200 and her last statement really takes the cake. "Since you have RM150, you can pay it now, and when your salary comes in, you just pay the balance.". And another round of "You holding me at ransom" between me and her goes on.

No turning back
Finally, I said, "Fine. I am going to make a Police report instead." Because there is no point to this anymore since she would not listen to me and only bothered about her car and herself. And because this is not a neutral ground, its best to leave.

And for a moment, she sat on the chair, staring at her car, in a disbelief voice, "You rather pay Rm300 summons and all that just to avoid paying RM200 which you can settle now?"


"Yes, I should have followed the Law in the first place instead of doing this.". "But why? You can just pay the RM150 now and then the rest later. You can trust me, look, see that guy behind you? He can be a witness"

"How am I going to report to the Police (at Jalan Bandar, as we were informed)? I need to fetch my kid too." Maybe her mechanic friends sensed or assume she is trying on her pity act, tried to help call my bluff, "Never mind, you just fetch your kid, and then report later", "Yeah, Lady, go and report la."

And I stoked the fire further, "Yeah, you can report this within 24 hours. Go and make report."

"If there is nothing else, I am going to the Police Station." I looked at her, turned around and then walked off. 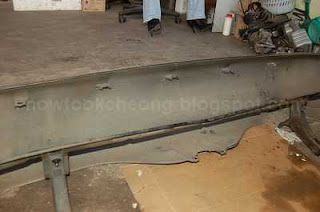 Everything was OK. The metal bar was intact, but only two out of five
plastic tabs were broken with one more about to break. Not in the pic
was the side tabs which, on the left (of the pic) was already broken and
she had someone screwed it back. On the right, the same damage was
there too. Although the mechanic said it could not be repaired because
of this, I start to get suspicious as Hell. 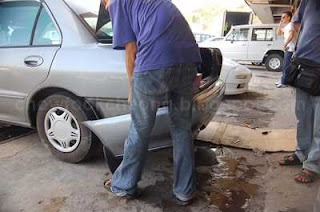 Right about here, when I took the picture, some of them panicked
and told me about rules and regulations of workshops that I
cannot take the pictures there and then. Rather than arguing with
them because they might be right since they are the experts in
this industry, I just put the camera away (And I have took more
before they came)
Downtown Station
The reporting was fast. Just about half an hour before my arrival, she did call me, which again I ignored because I know what the intention was. I felt as if I have done this countless of times, typing my report, that is. By the time I met the Sergeant and explained everything. In the end, he gave me the summons, and he sort of knew what I was feeling (or almost pity me?). I did not get much clue out of this except from his hint that she did come and yakked all over the place and so, I got until the end of April to pay the summons. But there was one thing which seemed a bit funny as he kept asking, "Is there anything else you want to add?". Since he has another "Officer"sitting next to me, I decided to play it safe. He did cautioned me not to be a "nice guy" since there are a lot of these people about in KL, make the Police report instead and sternly told me that we should have selected a neutral workshop too as the outcomes can be very dangerous.

After that, it was just a matter of formalities, where I got the summons, and he asked me to get my own photos printed by Sunday (to compare against his photographer's?) since I took some on my own and deliver it to his desk. He did say it to me that the fine is compoundable but the power lies with the compound officer and not with him, .Within an hour, everything is done. And I felt very relieved for the rest of the night.

So, instead of getting her bumper fixed immediately, she would have to wait until all the paper works are completed before the actual repair can begin. I did tell my wife all this and her answer is that the Lady sort of deserves it for being such a pain and would certainly get a scolding from her husband.

[Update: 22.02.2009]
Went to the Police Station and handed the photos as promised to the Sergeant.

"She's claiming insurance, you know." he said to me as he shook my hand.