On the first day of The Chinese New Year, we will go through the praying ceremonies and especially the "Tea Ceremony". I wanted the girls to be involved so that they will know what to do when the time comes and not sway into other Religions for nothing. It is important to start the Traditions when they're young. They have been given English names and that is as close as they will ever get. 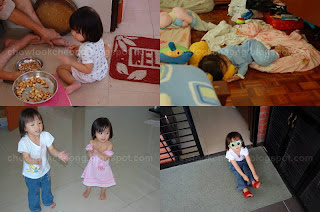 [Clockwise from TopLeft]
1. Kaelynn helping Grandpa breaking the Lotus seeds
2. Kristine still asleep (as always)
3. Kristine all dressed up but I have to make sure she does the Tea Ceremony
4. Krsitine and Kaelynn shouting Gong Xi Fa Cai to Grandma and Grandpa

Trip to the National Zoo
To tell you the truth, as fas as I can remember, I have never actually been to the National Zoo. And having been to the Singapore Zoo in 2004, I was trying my best to keep my hopes high. Unfortunately, this is not the case. In Malaysia, with the "tidak apa" attitudes, nothing surprises me anymore. When we were quite near to the entrance from the opposite side of the road, the place was already jammed up with a lot of cars. This was because the road leading to the Zoo's entrance was very narrow and all it took was some cars parking on the road shoulder to create the jam. After much thinking, if I am not mistaken, this could be the same entrance since the last few decades, except for the fact that at that time, there were not much cars. The entrance to the Zoo proved it as the design harks back to that era.

Being there was not much to shout about except that it exists in Malaysia. I can feel that it has been neglected for quite some time, looking at the facilities and the number of surviving animals there. How the Zoo maintains itself, I have no idea. Maybe it was mostly from sponsorships. Maybe it was from the ticket sales. But looking at one of the dustbins, the logo of the sponsor was still there but not the "words". Business rivalry? But in its place, there is another fast-food restaurant called Marrybrown (says so on the map).

Speaking about maps, the one in the flyer is slightly different from the signboard versions planted at strategic places. Although the flyer shows you the location of each eating place (i.e. huts selling drinks and popcorns and waffles, etc.) but only the one on the Map would show you an actual restaurant. We found this out AFTER we stopped by for some burgers. And I tell you, everyone queues for food except for a particular race which thinks they own the Goddamn place. While everyone else is queuing, they just walked in and started to order, getting impatient when they were not served immediately.

The National Zoo is huge. It is so huge, that it would take you days to just visit every caged animal in there (if you're a 6-inch tall human, that is). And it is very well maintained, with all the wild grass strategically grown to make the habitat looked unkempt. Even the facilities such as toilets were purposely rendered unusable so that it gives you that quaint feeling you're still in Malaysia. 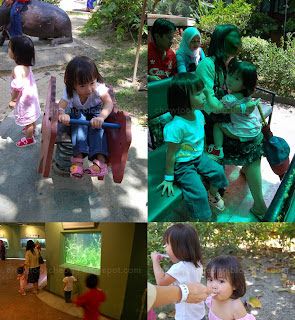 [Clockwise from TopLeft]
1. The very first place we stopped was the play area
2. All aboard for the Tram/Tractor/Whatever ride
3. Kristine and Kaelynn taking a short snack as we could not locate a proper restaurant
4. A visit to the Aquarium [Clockwise from TopLeft]
1. A parrot eating its meal
2. Giraffes
3. After the shot was taken, the boy was reprimanded by the Warden not to feed the elephants. Oh, the rocks on the left are elephant shit
4. I don't know what this area is for, but I think its for giraffes and other beasts. Its very untidy
The whole journey took us the better part of the day and on the way out, there was a huge traffic jam, blocking other vehicles from coming in because of one parked car. I also witnessed a Mat Rempit gang in action but I was too slow with the camera. Morever, the traffic was moving. Anyway, we stopped by Mid-Valley on the way home and judging by the parking spaces, either most of the shops are closed of we're very lucky. Ha ha.

Still, it was fun to go back there after a year's of absense. But we're still unable to walk across to The Gardens again, no thanks to the 2-hour dinner we had there. And by 2100, most of the shops have closed. Haih 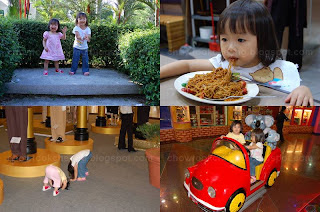 [Clockwise from TopLeft]
1. Kristine and Kaelynn saying Goodbye at the Zoo
2. Kristine at Mid-Valley and in a 2-hour dinner
3. Both girls at one of the rides
4. Mooning outside Metrojaya
Date: Thursday, February 07, 2008 No comments: Links to this post 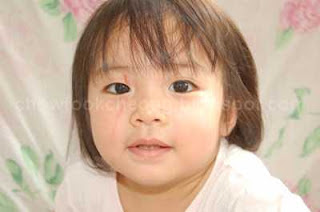 This happened a few days ago when Kaelynn was browing
through Krsitine's books when Kristine suddenly got angry
and snatched the book away from her. In the process, the
book's sharp edges cut her face leaving a scar from the
cheek to the eyebrown. She could have been blinded
Date: Thursday, February 07, 2008 2 comments: Links to this post