The tester is actually facing a very serious problem in terms of portability. I mean, sure, it can be carried around but when you are on a ladder and testing the CCTV, the tester instantaneously transforms into a bulky and cumbersome object, hindering your job. I can't hang it because there is nothing to hang. I can't hold it with my other hand because I am holding the camera instead. So what do I go? Obviously I can't expose myself to some radiation because their results are unpredictable and depending on what comics you have read, it would do anything except giving me extra arms.

And so, today, while taking a short walk during lunchtime, I went to the favourite Made-In-China store and found the (almost) perfect solution. Drinking water bottle straps!

Now, I am sitting here, in the office, with nothing to do but being bulky and cumbersome. 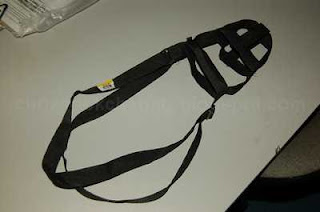 Here, here, boy! I got something for you! 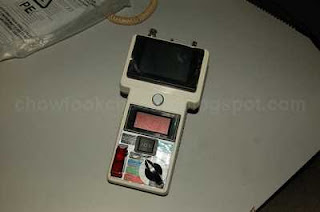 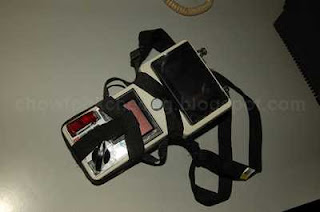 There, now I can make sure you don't go anywhere
by yourself. Anyway, I have to drill some holes in
the casing so as to hold the straps properly. When
you're high up on the ladder the last thing you'll
need is the tester making an escape and going
9.81 m/s downwards.
Date: Tuesday, October 13, 2009 No comments: Links to this post