Yeah, you would have heard of this place even if you do not know where it is. It was famous for the leper colony decades ago. But now, its a hive of activity because that's where the Industrial Area is. Most of the stuff being manufactured in Malaysia, I can safely say, would have some parts manufactured in Sungai Buloh.

Its a big place, I tell you. Every nook and cranny, you would see some factory or shops making stuff. And its also a very busy place. You can see a lot of lorries going up and down the main road every few minutes.

Anyway, I was at a customer's place relocating their keyphone system. It was already midday and I was a bit miffed because after I have dismantled their keyphone from one site to another site within Sungai Buloh, I have been mildly surprised with the latest fact that the customer has forgotten to lay cables meant for the phone. After installing the keyphone sans cables, I was already tired (from cleaning the system from grime and dust since they had a fan blowing on it for years).

Suddenly there was a horn, the ones you normally hear being used by Indian bread sellers on their bicycles (if you can remember this, you are quite old) or motrobikes. So, I looked at the source of the noise and lo and behold! It was a Malay chap on a bike.

Its the same concept as the Indian bread seller; a big metal box on a bike with lots of candies/sweets/junkfood hainging by the sides.

What is so different is that although he had a metal box, the contents inside were cold. It was filled with iced tea, coffee and other kinds of drinks. And at the side, were bull's gonads (Ok, they were bananas moulded into lumps and deep fried).

What really interest me was how he served the drinks. Once you have chosen the drinks (packaged in a plastic bag and sealed with rafia string) from inside the box, he will hand it to you and along with a straw which he will cut at an angle so you can poke into the bag without opening it and spilling everything onto the floor. And all the time he was holding his pair if scissors which is essentially his main tool. (And also in case you did not want to pay for your drinks. ha ha)

Now, this concept first originated with those Yeo's tetra packs where you use the same shaped straw and poke it into the silver hole. Of all the places, this one enterprising guy's really smart.
Date: Monday, May 09, 2005 No comments: Links to this post

There was quite a jam this morning in Kepong. Along the road, you can see a few tractors, some people who looked "Official" and also the unistakeable green/yellow DBKL lorries. The reactors were seen demolishing a few makeshift houses along the street.

A lot of people were there, some were arguing with the "Officials" while some were almost in tears. I will never know what happened but hopefully, it will be on tomorrow's papers.

Maybe they did not pay the land arrears or something like that. Mayb they have given warnings already but decided to stay on regardless. Whatever it is, it is quite disheartening to see your decades old house, which you have built with your own hands being demolished within minutes. 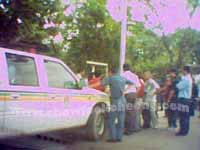 Some people were quite distraught 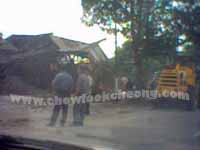