The Third Episode of Madness

I will never ever understand why I ever did this. The Official Premiere is actually on May 19th but somehow, all the tickets were snapped up by "Corporates" for their own customers. Which is fine if you are one of their customers.

So, Ultimate Toys did the next best thing. Try as they might, everyone knows that getting tickets on the May19 date is impossible and even if they did, it would not be fun because their friend's friends would not have such luck. It would be like watching Vanessa Mae performing one song with only yourself in the room.

Yeah, you'd have seen the greatest show on Earth which everyone would hate your guts for being the lucky S.O.B.

Anyway, with the dates changing from 22nd to 23rd, getting the tickets were also a problem. When I sent someone else to get them for me, they reported that there was a long queue and the tickets were not there until in the evening. Anyway, to cut the story short, by the time I got them in the evening, I was quite relieved.

Now, I can concentrate on my Lightsaber, heh heh.

(So, Ms. Fon, if you're reading this, your tickets are safe in my hands now) 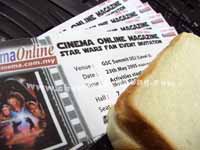 Four pieces of paper which only crazy people would get excited at 10AM on that morning,
Date: Sunday, May 08, 2005 No comments:

So, today is Mother's day. You would know this because your Mom would be dropping subtle hints like, "Aren't you my son?" or "I love flowers! A LOT!!!" or "Take me out to lunch or else". Of course there are other subtle ways such as dropping the calendar on your bowl of cornflakes or other unameable actions.

But anyhow, we ended up at this swanky new place called Xin Shanghai (New Shanghai, I suppose) at Jalan Sultan Ismail. Its located at the corner, right nest to the brown HSBC building. With its nice glass windows overlooking the street and the alley, one is impressed when entering the door. It is not often you get to see old Chinese photographs splendidly recreated in fresh A4 paper and urinals catered for dwarfs who loves to clean their hands with a bif glass bowl.

And the best of all, we got ourselves a VIP room with a table so large that anyone who has a waist of more than 10 inches won't be able to pass about. But to top it all, we had a Captain who hails from Shanghai itself. (OK, I am not so sure about the events after this since everyone was conversing in Mandarin)

So, after the cake cutting, everything went downhill:

1) One of the soup dishes had 2 strands of long hair which the captain said was some kind of (vege or fatt choy). When we proved it to him that it was actual human hair, he said its the supplier's fault, not his. After some persuasion, the Captain compensated us with some fried noodles which vanished with just a few servings.

2) The dish came in very inconsistent timing. Some came in as if they were stuck at Customs and some came in by threes.

3) Sad to say, there were also problems with the waitresses. With so many dishes on the table, no one came in to clear them and pretty soon, you can guess what happens next. At one point, she even had trouble carrying the soup from her tray onto the table without avoiding the messy cutlery.

4) Halfway through the lunch, one of the dish was not available and no one informed us. We waited for more than 30 minutes until the Captain was summoned. Unable to bear such service, we decided to go on a diet instead.
5) Even the bill did not have any description but only numbers a hard core accountant would understand.

Maybe its Sunday. Maybe there was no overtime. Maybe its bad luck. But one thing for sure, we're definitely not going back there.

Because what was so bad was the Captain's inadmission they did a screw-up and downplayed the whole issue, assumed we're normal "softspoken" Malaysians that he could overcome with his raised voice. 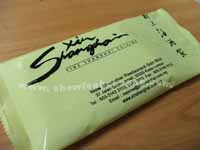