When I was studying, I submitted to the facts that coffee can keep you awake. Really awake.

Still, at that time, I drank them as if they're water and by the litres. you can imagine what caffeine and sugar did to me for the rest of the day. But what I was really addicted to was the taste. That unmistakeable coffee taste. Unfortunately, I can never get a good cup of thick coffee. So, yes, like any other students who loves their drinks, I started to mix my own drinks. And as far as I can remember, here are some of the results:

Later, I came to realise that there were others who mixed their drinks successfully and is readily accepted by the public, hare are some of the drinks I have discovered and I seldom go out much at that time:

01) Soya Milk with Chinese Black jelly aka Leong Fun
This drink is known as Hak Bak (or Black & White in Cantonese) or Michael Jackson because the Soya Mil is white while the Jelly is black.......

02) Neslo
Its Nescafe mixed with Milo (or Ovaltine, methinks). Many would have tried this at home but what makes it the mamak special is I think they add condensed milk instead of the normal sugar and milk.

03) Air Bandung
Its actually Rose Syrup and Condensed Milk. Too sweet for me 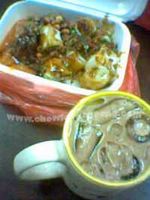 Whoohoo! Glutinous rice and chee cheong fun drowned in chili and gravy
with a cup of Neslo Ice.

So, after many days of torture (and also waiting), I managed to gather enough strength to apply pressure to a pair of cutters. And the Wardick (Ha ha ha ha) is now finally completed.

One thing I can say is that the plastics from the Zoids is quite brittle compared to the ones I had decades ago. I got the Hammerhead Shark sometime last year and after storing it for a while, some of the parts broke when I accidentally knocked it. Sompared to the one I had when I was a small little annoying destructive brat, the plastics were quite hard. Anyway, I'll just let this one alone for a while and see how it behaves itself 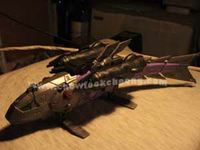 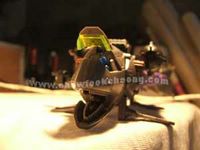 I still loved that cockpit and the blue guy.
And the mouth opens to reveal a gun
When I was a little brat, we call talkative people, "Machine Guns"

Excuse me, do you need a cup?

When your body is hot, it has a few ways of cooling itself. Because if it does not, you'd have a full scale fever or some other exciting Life-threatening situations. So, naturally, the body excretes out a clear liquid on the skin which we indentifies as sweat.

Some people sweat all the time and some minimally. But there is another case where they sweat on demand. Ha ha ha ha. Seriously, I have seen a few friends of mine, who, in one minute were fine and the next, sweat lashing out. This was when he eats chili. There is some checmical inside the chili which when he takes a bite, its as if the floodgates have been opened. You can imagine the sweat flowing out non-stop from the top of their head to their cheeks.

Until it reaches the the chin where it drips to the floor/table/cup like a leaking air-con hose.

MONSTAT: [BEEP] This is the Internal Body Temperature Monitoring Station reporting or IBTMS for short or IndyMonstat, or ..

BRAIN: Yeeeaaaas, what is it now?

MONSTAT: In case you have not been thinking (ha ha ha) lately, you would have noticed we're quite hot in here.

MONSTAT: We need to keep the body cool, boyo.

MONSTAT: Nope. He's not been active eversince a foreign object hit him during one of his wolf-whistling sessions.

BRAIN: Ok, then it must be EYES going through the Electronics Catalog again.

MONSTAT: Nope. Hey! I know what can cool the body down! Let's go for some cool Pepsi Ice!

BRAIN: No way! STOMACH and I are not talking ever since she forgot to filter out those proteins. You know what happened, right? HAND was in pain for a week due to GOUT.

MONSTAT: Oh, c'mon. She was too busy digesting that spoilt crab. It wasn't her fault because you did not tell MOUTH to spit out that crab even after TOUNGUE warned you.

BRAIN: erm, let's change the subject. I'll get the body to take a shower instead

MONSTAT: Yeah, that would be fun. And NOSE would be happy when we try the new soap.

BRAIN: Yeah, hey. Wait a minute. HANDS still has the GOUT. How can we get him to take a proper bath? SKIN would complain that half the body is itchy and well, you know.

MONSTAT: Darn. OK, how about asking LEGS to move us into an air-con room?

BRAIN: Not a good idea since SKIN is trying to cool the body with sweat.

BRAIN: Sigh. Oh well, I suppose we could all do with a nice cool drink then.

HANDS: Ha ha. No can do. Who asked you to wrap our hands in bandages? We can't even get the wallet out from the pants.

BRAIN: OK! Forget it. Let's go for a walk, then

LEGS: NO way, hose! We're not going to walk around the place half-naked again.

BRAIN: What the..? Are you trying to stand up to me again?

EYE: Well, well, I see we're going to have some trouble here

HAND: Better not. We can't take all these confrontations

BRAIN: Well, well, if it isn't the EARS, the butt of all my jokes.

BUTTOCK: Yes? Someone called my name? 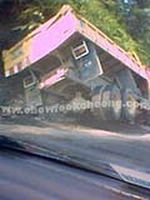