You know what? Sometimes, despite everything, I am grateful that I still have a job. At my age now, its too late for me to go venture out on my own or even find a new job. I may be good at what I do and so on but once I go into another area, I would have to start from scratch again. Not only that, the fear of failure at this stage is too high a risk since I already have a family. On a brighter note, working for my Boss, my take-home pay is something to be (at least for me) proud of. Because it took me about nearly four years to overcome what I earn in nine years (OK, so I was underpaid in my ex-company. Ha ha!)

And with the recent Economic turmoil, I am ever so grateful. However, the same cannot be said for those who are now experiencing their own job crisis. This is ever more so if you're in the Oil & Gas, Manufacturing and even Financial Industry. Be it local or Multinational, it affects everyone across the board. And so, with a heavy heart, I start my post for the day (even if it took me days to get over it). One of my friend's wife was affected, you see. She was working in a two year old company and one day, they received an E-Mail stating that all of them were retrenched on the spot. Imagine the mood everyone felt on that day. No warnings, nothing. And so, with everyone gone, my friend's wife's last task was to make sure the company is properly closed and all of its assets taken care of. Lighten the load and sell off whatever that is possible.

And that is how I got the call the week before. Originally, when he called me about some stuff that needed to be sold, I was excited as this would mean I have more systems in the Company in case there are some urgent installations. But because of my company's financial strait, my Boss could not agree with me. And so, he curbed my enthusiasm at the pavement of despair (Is this a bad pun? Ha ha ha! Sounds like some fancy novel writing). And from the conversation, because the company started about two years ago, their phone system could be the older Panasonic KX-TA308 which has been superseded with the newer KX-TE824. Either way, I could have access to obsolete spare parts or a new system. My friend called a week later asking me if I wanted it since it was still not sold off. And again, my Boss said no. So, I called Nex up since he needed one anyway. And he agreed to take the system but had some reservations for an obsolete system. I understand him because at where he is, Customer Service is not exactly on the edge of awareness but more of murking about in the valley of insignificance.

And so, began my afternoon of AWOL (At Work, Only Liberated) to get the system dismantled. And what a nice surprise when I was there! It was a Panasonic KX-TE824 after all! And the "Spider" Conference Phone is not what it was but an Aethra's The Voice, a direct competitor to the more established Polycom. Luckily, one of my customer in the same building was looking for a conference phone and after testing it, he was happy to have it eventhough it's missing two extended microphones. He also brought his colleagues up to help as well. In the end, they got the remaining water drinking system since the other has been spoken for. Initially, I marked up the price for the Aethra system (original is worth more) thinking the extra cash would help my friend but in the end, it was for me. So I felt guilty doing that (that is why I am not so good at making business and profits, Nex) but then, one thing led to another, I got a very nice table in exchange for the extra cash. 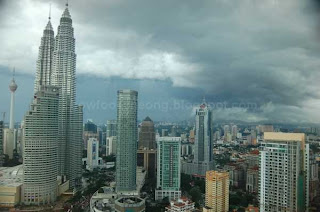 I have a feeling this is how my friend's wife felt and the weather
ouside reflects it. Still, with her husband and friends to help out,
joking all the way, the pain is not so bad. 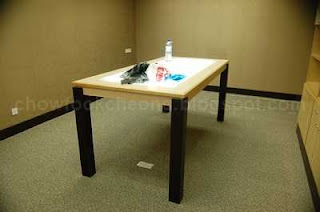 And the "free" table. All I have to pay for, is the transportation.
Its actually a map table, complete with light under it. So, this
might be ideal for my Dad. I was told the walls were double
reinforced to prevent people actually breaking in an steal all
the precious maps and information. So, behind the plaster
walls were another layer of plaster walls with metal mesh
sandwiched in between. So, you can make a hole but you
can't get through. 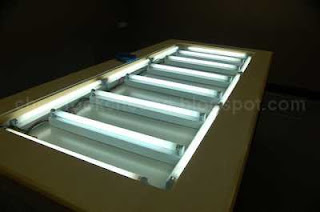 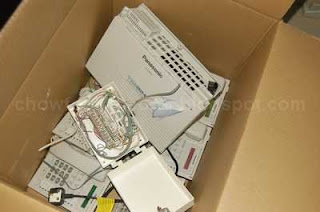 So, this Panasonic KX-TE824 complete with 6 display phones, some
great Cal-Lab lightning arrestors and a DB Box plus cables for the
backup batteries is for Nex 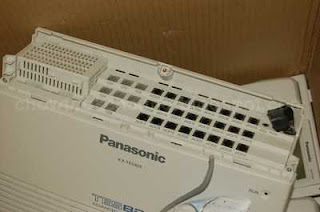 The best part is that this is a fully expanded system capable of taking 8
incoming lines and 24 phones. The only thing missing now is doorphone
card which I will have to search/buy for Nex. And looking at the system,
there is no CallerID card which if I am not mistaken, was given as part of
the package during purhcase that time. I guess the Dealer kept it for
themselves and assuming the customer did not subscribe to CallerID
service from Maxis. Because if I was wrong, then this is a bad case of
ripping off the customer.
Date: Thursday, November 20, 2008 No comments:

Stoned in the car

Sometimes, the Hyundai tend to have some unpleasant smell ranging from mouldy paper (from carrying boxes) to something fishy (my RM1.70 fish keropok lunch) to and from whatever else my clothes would pick up. Its anything but the car smell.

So, one day, while I was pumping petrol, I came across this non-edible cake. Its from the same company which sold the famous MagicTree air fresheners. I am not sure if its a good idea but at least, the thing is being sold as the same price as those liquid air fesheners which I would need to attach to the air-con vents. Since the Hyundai is a nice car, I am not going to decorate it with something so out of place. And more so, chances are, the liquid version would evaporate under the tremendous heat. So, at least with this solid, I can hide it under the seat away from the Sun an dnot worry about spills 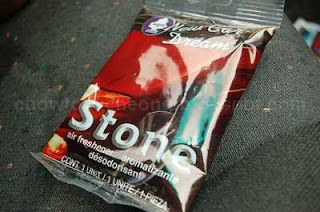 This rock sells for Rm12.90. How long it would last, I am not sure and
whether it would shrink or just degraded into paper weight, only time
will tell. They call it Stone but I doubt I can use it to throw at people 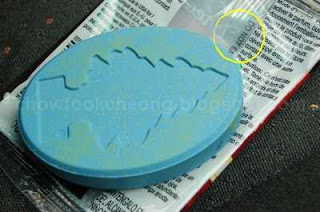 With the smell such as Blueberry, Strawberry, Vanilla and this one,
I am not surprise when they put a warning on the package. It said,
"Do not Eat". Had to cut open a hole in the bag as the instructions
also mentioned that I cannot leave in on any surface.
[Update: Afternoon 22.11.2008]
Boss: What's that smell?
Me: What smell?
Boss: Smells like something funny like.... like....
Me: Oh, yo mean the car freshener I kept under the seat
Boss: Well, yeah
Me: Its from the MagicTree and at first, I though it was those car leather PVC smells
Boss: . . . .
Me: But it turned out to be something sweet, like those baby perfumes
Boss: Ah, now I know what it reminds me of, Ridsect! (Mosquito repellent)
Me: . . . .
Date: Thursday, November 20, 2008 No comments:

This one was a weird one for me. The uphill slope from Jalan Damansara to Bangsar is quite steep and there is no way for any vehicle to ram the lamp post with such force. And in the morning, it is quite jammed too. Still, with the Policeman being there, it created a lot of onlookers on my side of the traffic while it is smooth on the other side.

Why? Because everyone stopped to see which/what vehicle that did it. (It was gone, by the way) 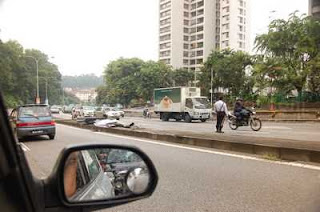