Breaking in the car

Maybe I should have titled it, "Going for a Test Drive in my new GT-R R35". The word break is so sensitive tonight. So, I am not going to type that word again. No more breaks.

Anyway, enough of hiding it in the room because I am itching to let my girls play with it for a while. My intention to modify this car, if its successful, is going to have a very worn everyday look. Its not going to be one of those with the irritating showroom mirror finish shine which reflects everything on its surface. No, sir! So, what better way than to let the girls have the fun while breaking it it.

This is because I want to retain all the scratches, dents and breaks in the plastic so that I can see how tough the car it. It might even help when it comes to painting it later on. 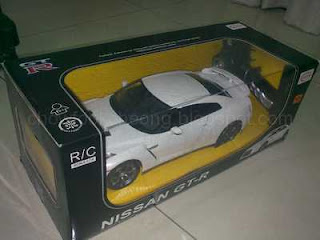 For the car this size which costs close to a hundred, this
is quite worth it, depending on how you look at it. 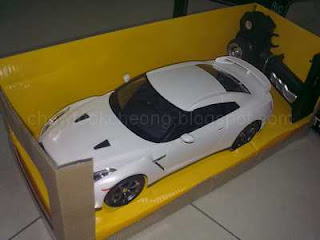 For one thing, this product is very well packaged. And
with the car's beautiful paint job, you actually want to
take your time to slowly open it up. Whoever designed
this packaging gave a lot of thought to give the box its
strength and also retains enough to show the product.
Only gripe was that it could not have a square hole to
show the car's front which most other competing
products are doing. First thing out of the box is the controller. This reminds
me of those quick-drive Tamiya controllers but I can
definitely tell you that it feels much flimsier. Anyway,
it is very light eventhough I plop in a fresh 9v battery. 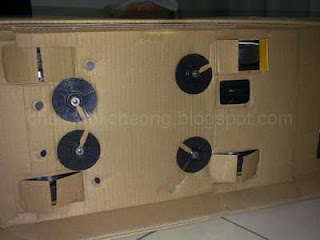 The car is secured via 4 screws which goes under the
chassis. Because the box is made of cardboard, each
screw will have a black plastic disc so that the screws
will not rip through it and let the car clunk about
should the box falls upside down. 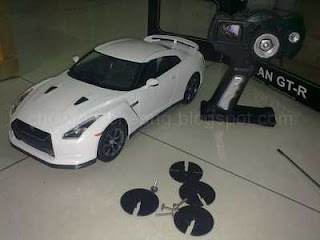 So, after using the screwdriver, I managed to detach
the car from the box. And on the first feel in my hands,
it felt very sturdy, thanks to its hard plastic. But for a
real R/C car, this is a no-no as it adds weight to the
whole thing. More weight means more drain to the
batteries which means less fun-time. And more
'ouch' when it hits other people's legs. 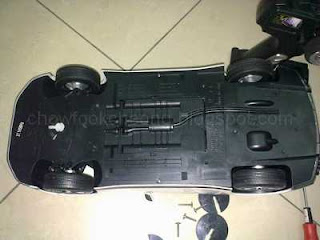 On the first glimpse, the chassis of the car is ideal for my
project. Do not be bothered by the loose battery cover.
Once you put the slide switch to the 'ON' position, it will
also lock the flap in place. By doing this, you do not have
to waste much time switching the car off and then open
the flap with your hands/screwdriver, etc. Nice idea. 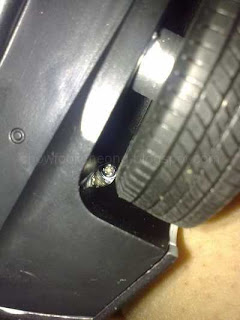 The two halves of the car is secured by a set of six screws.
Two are in the middle of the chassis, towards the sides but
the other four are actually hidden in the wheel wells. 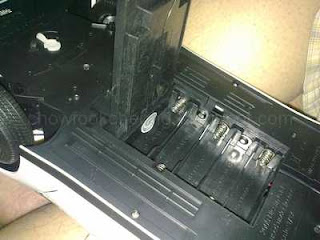 The car takes five 1.5 AA batteries, which is about 7,5 volts. And
so, which leads me to think, it could be adapted for the usual 7.2v
systems found in most serious R/C cars. 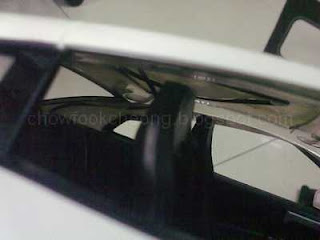 Another reason which made me chose this product in
particular was the way they hid the aerial. Of course
this will affect the effectiveness of the R/C system but
hey, at least I do not have to worry about sealing
those oblong holes. 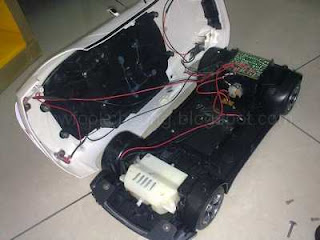 The electronics for the car is very simple as evident
on the green PCB on the top right. It receives the radio
signals, controls the steering motor and also the
direction of big 'power' motor. As I am not a real
R/C fan, I swear that the rear wheels have differential
gears because when I turn one wheel clockwise,
the opposite turns anti-clockwise. 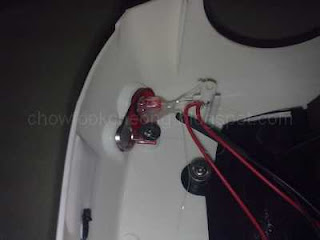 What I am interested was in the car's lights. Here, they
glued a 3mm white LED into the part. And its just one
light. So, I might have to modify this later on. 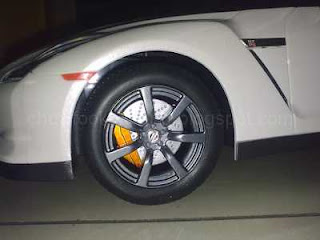 The next thing is the brake disk, which 'wobbles'
about. Not a problem to me anyway. 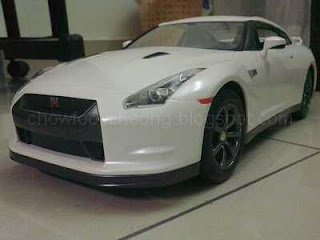 One thing I forgot to mention is that this car has
independent suspensions, which is really great. 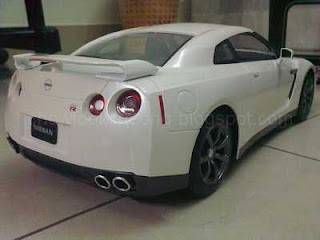 Beauty shot from the back. 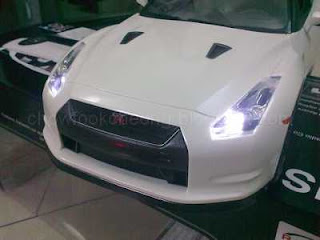 Coming back tot he lighting, I assumed that the
front lights would be on once I switched the car
on or when I activated the controller. This is not
the case. It comes on when the car is moving
forward and goes off when it stops. 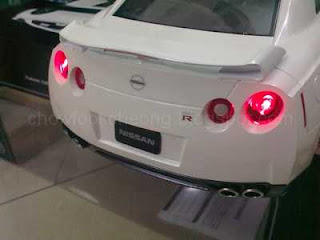 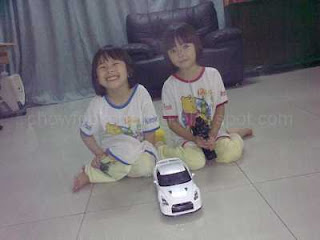 Ladies and Gentlemen, meet The Stig(s) who will be
brea... er, test driving the GT-R in a few moments. 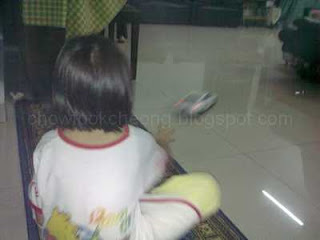 And so, after explaining the controls, off they went.
The car literally went everywhere, most of the time
knocking into furnitur. I tested the car's response
and for that price, I cannot complain much. 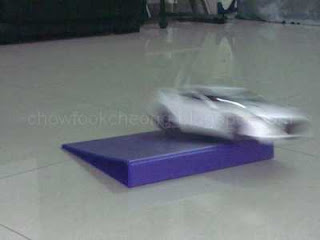 I bet if I remove that body completely, the ramp
jump would be more spectacular. 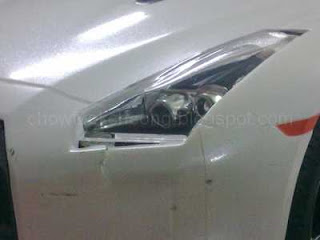 Today was supposed to be a rest day, being Sunday as it is. But no, there are a lotof things we need to do. For one, Wife reminded me that Kristine has her martial arts class, then after that, we need to go to buy sine stuff. And also, since its close to CNY, I got my Wife to call her Mom out for Lunch as well, not taking NO for an answer. What I did not like was the incessant rain that came early in the morning and lasted until evening.

1030-1045 AlanTAm's Bak Gua delivery
Delivered the Bak Gua to one of my friends who will then distribute the rest to other friends. I hope he likes it because this is his first time and I will know in a few day's time or, maybe next year.

1100-1230 Kristine's Martial Arts Class
Before I can settle down for breakfast, it was time to get everyone into the car for Kristine's Class. Well, RM25 for that long seems worth it. But then again, these are kids and the discipline is not so strict. Still, this is great for her, hopefully when she progresses, there is some sort of discipline in there. 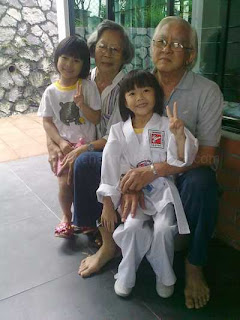 Both girls with Granpa and Grandma 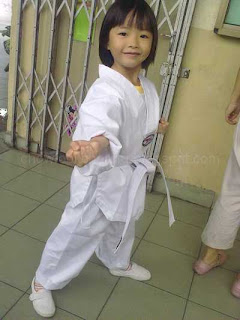 Kristine in her new uniform. As she has
not started her lesson, she did an
impromtu stance. So, her fist is wrong. 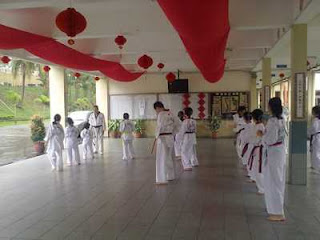 The warming up session. Because of the rain,
some students were late so they get a scolding
from the Masters 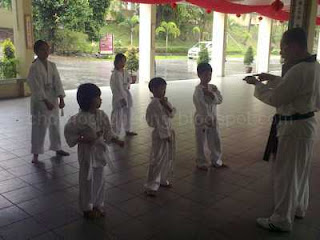 After that, Kristine was placed with the
other beginners. We noticed that she is
not paying much attention but rather
to the boys instead. Haih. 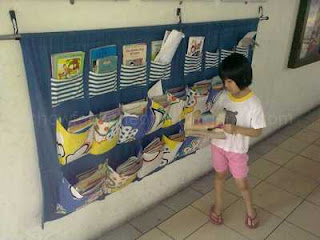 In the meantime, Kaelynn saw a lot of books
and so, being her usual self, she started to go
through them. Yep, she loves books. 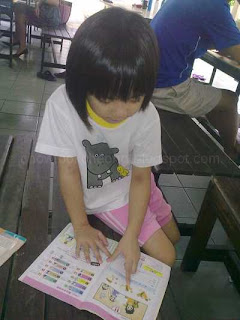 She will go though over them, and what
she does not understand, she will try to
figure it our by herself or ask us. 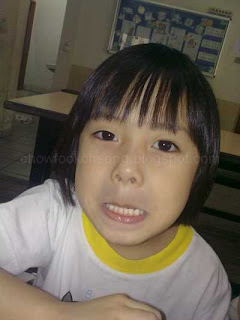 At the same time, Kaelynn
has a new face.
Unfortunately, after the class, she started to try out all her moves on Kaelynn which causes a lot of mess and crying and harsh words.


1300-1700: Lunch with Mon-in-law and more shopping
So, after that, it was off to Lunch. Because there was a lot of traffic on the road, I had to take a lot of detours. I suspect it was due to the last minute shopping as the whole of Federal Highway towards Mid-Valley was jammed and the path towards PJ was not. And so, it was lunch at the Esquire kitchen where the service was quite moderate. But once hte food arrived, they came in droves. 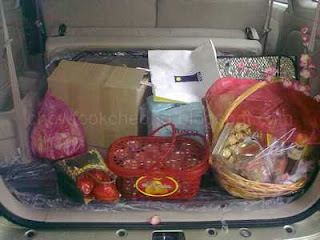 Gifts being exchanged
Date: Sunday, January 30, 2011 No comments: Links to this post

Its that time of the year again and AlanTam is selling bak gua for charity. I know he is a very busy person, what with his work in the Hospital and all but I was very grateful for it. OK, for those who do not know AlanTam, it is his nick in the Forums where I go to. So, AlanTam aka Ahlun aka eggtart, etc is not related to Alan Tam of Hong Kong.

Every year, I get mine from him and its delicious. Also, because its for charity, I do not mind buying them. For RM35.00 for one pack (500 grams, I think) it is a good bargain too. Also, because of the coming Chinese New Year, the prices are going near to RM90.00 for a one Kilo pack. However, this time I am cutting back and not order so much, not because of the money but its just the reality of it all is that its too much even for everyone in the house.

Anyway, I met him around 10-ish and from his very own words, "I am not sure if its nice or not this time as I ate a slice when I was very hungry. And when you're hungry, everything tasted nice". 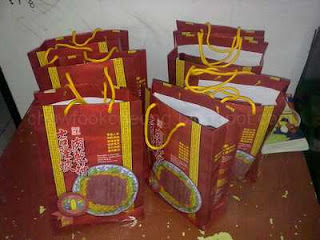 And this year, apart from my Boss, his friend was
also interested in it too. I shudder to think how
many I would have to carry next year. Ha ha ha 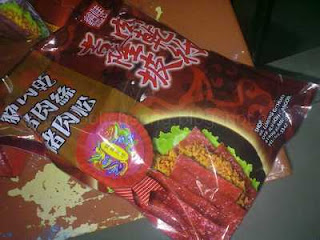 And so, there are 13 packs like this. But this time,
all of us preferred pork to chicken.
Somehow, at the back of my mind, I am wondering if he ever wanted to expand this into a business and start to sell other stuff too, like crackers and mandarin oranges. I mean, just for Chinese New Year, la.

Update: The packs were opened the next day and as usual, the meat was soft and delicious. Unlike the hard slices my Mom bought earlier on. Still, what do I know about food?

All I know are that his are the best in my book.