Right after their meals, we took them to the play area. We had to make sure Kristine eat something because she did not eat much for the past week. She was so excited that it was a difficult task since her mind was already set on the play area. 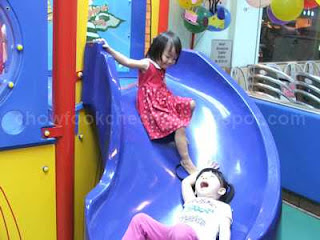 Kristine at her normal self
(She did not do anything to the girl. The girl was just posing) 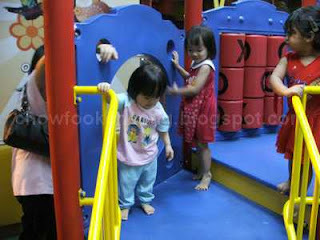 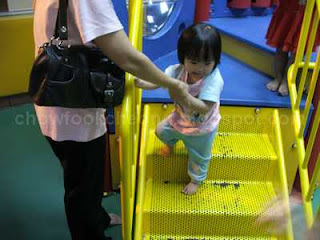 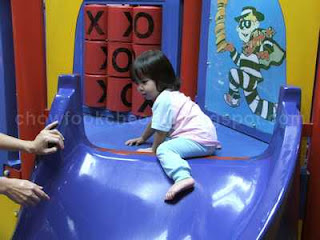 Kaelynn's first attempt at the slide
with Mommy's help
Date: Tuesday, November 27, 2007 No comments: Links to this post

It was the first time Kaelynn ever came to MacDonalds (I think there were more but I was not there) and all of a sudden, she is very quiet. We took the two girls there after the Doctor has certified Kristine to be fit and healthy (except that she still coughs and has a running nose. Weird Doctor). So, being in a weird and colourful place, Kaelynn just sits there and observe the environment. 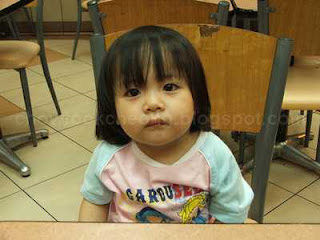 This is a funny place, isn't it? 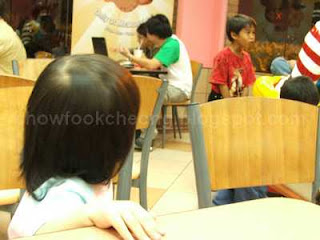 I can see some children playing 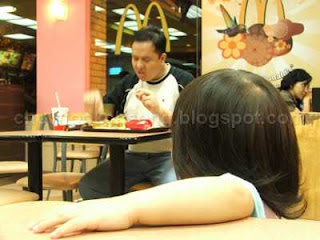 And I can see some people eating 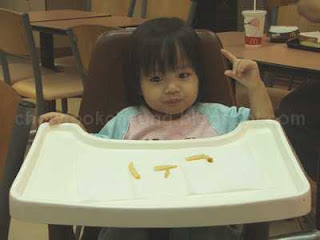 Then, Mommy and Daddy gave me these to eat
which is delicious! But they won't let me have Coke
Date: Tuesday, November 27, 2007 4 comments: Links to this post

After dropping the van off for its schedule maintenance service, I decided to drop by JayaJusco Kepong (since it was already lunchtime). At the toys section, I saw some 2007 Hotwheels and some of the designs were quite nice. Others were so-so like the 1960's Batmobile and a new helicopter design (Killer Copter) where the front looked like someone's pair of silver butts. I did not buy them because I do no like the 60's Batman and yeesh, for the copter, I'd say you really have to be there.

The reason why I was so interested (again) was because of the "Buy 2 & get 1 free" promotion that runs up to this coming 2nd December. The prices for a Hotwheels car has risen from RM3.50 to RM3.90 to RM4.90 to RM5.90. But if I buy two, and have a third, the cost per car would then be RM3.93, which is about 2003's prices, I think. However, there is a downside because you cannot choose the free car from the shelves but from a box at the Toys Counter. So, I had to take the best of the worst. 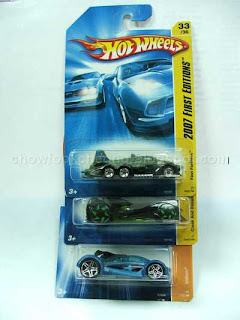 This are the three cars I bought from Kepong's JayaJusco 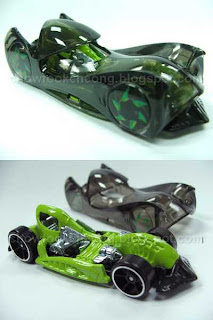 They call this "Cloak and Dagger", which
reminds me of the 1989 Batmobile and
once you open the top, well, I was hoping
there was something better underneath 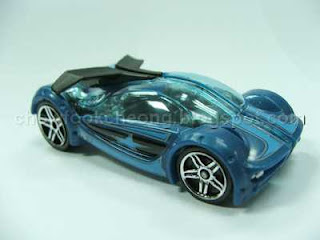 This was last year's Iridium but now, with a new paint
scheme. I was about to pry the body off but the metal
black wing at the top prevented me from doing so. 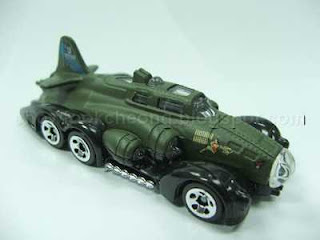 This is the free Hotwheels, called the Fast Fortress
In a sense, it looked like someone took a model B52
mashed it on top of a classic car. Still, the cockpit is
very nice.
Date: Tuesday, November 27, 2007 No comments: Links to this post

Sometimes it is fun to see both girls sleeping. One minute, they will snore and then the next, there would move about. When Krsitine was young, she would smile when she was sleeping. Still, I could just sit there for hours and watch sleep, well, I would if not for Kristine's karate kick every now and then. Watching them is just so peaceful and you feel as if you have done something right for the first time. (reminds you of Bob Caslisle's - Butterfly Kisses) 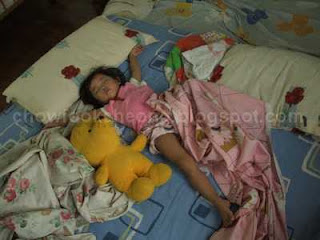 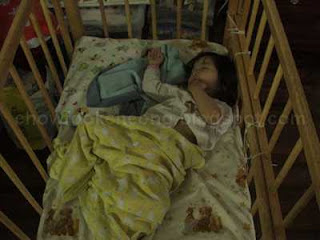 And here, we have the Two Finger Open-Belly stance
I think, in another few months time, Kaelynn will start
to sleep on the bed with Mom and Krsitine while poor
old me would have to find someplace else. Haih
Date: Tuesday, November 27, 2007 No comments: Links to this post