I know its a long Friday afternoon but there are some weird stuff going on. It started when i went to toubleshoot a customer's PBX System in Klang. 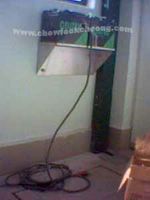 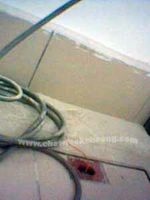 Unfortunately, the moron who intalled it was damn untidy.
Drilled concrete powder were everywhere and being a good guy -ahem- I cleaned it up by sweeping it into the manhole. Ha ha ha ha!
Seriously, i just left it alone and cleaned the place off all those dropped wirings some Auto-dialer guy did. These are the assholes who install those small little gadgets which routes your call to their gateway for cheaper rates. Unfortunately, they installed it after the lightning arrestor which meas, if there is a storm, their device would get hit. And when the customer cannot make telephone calls, I get the blame instead. Luckily for him, he did not mess up my wiring or else I would have ripped out the device and get him to install it again, in front of both the customer and I. 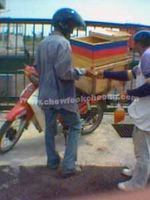 Suprisingly, here at P. indah, they also have motorcyclists selling drinks.
After buying a packet of Milo Ais, I cut the straw at an angle and wanted to show him how it done.
But he used his scissors to cut my straw back into a straight edge and made a hole in my Milo Ais instead.
Sadly, the Milo tasted too thin and there's too much sugar too. 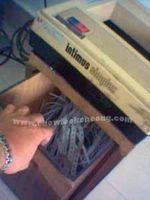 Spilling the guts on the old striper 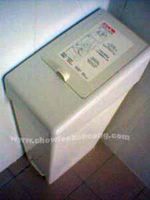 Funnily enough, this was meant for women but it was in the men's toilet.
Cleaner's Joke? 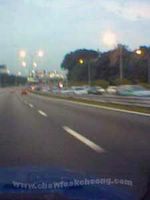 The horrible 7km long traffic jam at about 7PM
After following a Yellow Satria (SPOC Member CAS1XX3) with a beautiful double exhaust in Subang, there was a traffic jam from the Subang exit towards the Motorola flyover. It was caused by a stalled mini-van. Then, across the road near the Lien Hoe (formerly AsiaJaya) flyover, there was an accident. As usual, the Jam started on both sides due to many "busybodies". The picture I took was a bit blurry because I was enjoying the smooth ride all the way home