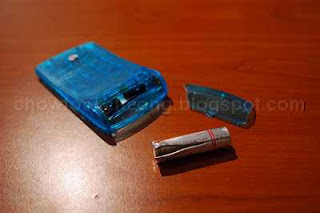 Sometimes its so hard to hold back tears when your kid
takes your coveted stuff, plays with it and almost set
things on fire. Don't ask me how the battery burnt 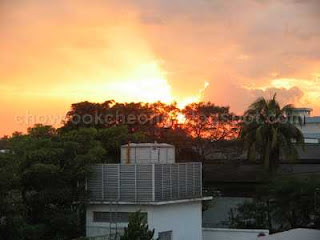 I am not sure how to use the camera but imagine the Sun's rays
chining out of the cloud on the top left, OK?

Well, you know what? If you all don't believe me, I will say it again. Timing.

There you go. Timing.

Some call it Fate, others call it coincidence. If you must, you can even call it, "no planning". The reason is very simple, we're moving this weekend. And the best part is, everything has been planned.

Except for one thing: We have not packed yet. With only less than 24 hours to go, you can imagine the chaos and panic in the house, which does not exist. Ha ha ha ha. Anyway, by six in the morning, I was roused from a fitful sleep as the lorry would be arriving in less than three hours time. Yeah, Kristine and Kaelynn took over the bed and both of us had to sleep on a
single mattress (hee hee hee)

Luckily, blueyebabe came and helped us. So, by the time the lorry arrived, we're ready. So, they moved the big items such as the fridge, mattresses, furniture, playstation, etc. While our cars were filled with other stuff. Our impromtu plan was to move the important daily stuff and worry about the rest later. Not only that, I am hoping we do not bring too much of the stuff back over here as there is no place since I am "fighting" for a space in the store room as my own workstation. No more using other people's room. And I have a lot of unfinished projects since 2005.

And what about the "timing" thing you asked me? Loctor just SMSed me the day before saying he will be at Central Market helping to man the PhotoMalaysia exhibition. And another friend was interested in coming along to meet him. So, by my calculations, I can slot in another trip to transfer the stuff from Kota Kemuning to Bangsar before we all meet up.

Unfortunately, I forgot to bring the keys......

Anyway, she drove us to Central Market and we all had a good time. But we missed zybisko14, I think, by half an hour. After that, we had to go home since all of us had different plans for the evening. I was afraid to reply to the Loctor when he first SMSed me since I know we're all busy moving stuff and without the Home Ministry's approval, the charges for going AWOL
is quite serious.

Still, in the end, I had to tell my wife. Luckily, she was in a good mood and so, I had my freedom, even if its just for less than an hour. For you see, I had to think of a lot of "excuses" so that I could go to Central Market but in the end, it was better to tell the truth for if I could lie to my Wife, then I am not better off lying to myself. Marriage is about trust and not about lies, even white lies. People believe its OK as they need to convince themselves that their wrong is right. And these type of people really pisses me off.

By the time we have finished moving stuff, set up the bed, repaired some furniture, set up the Astro (temporarily), it was already half-past one in the morning. And I was running about like a dying battery. 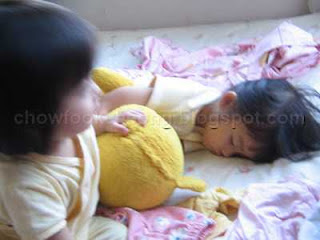 During the move, make sure the kids are not disturbed too much 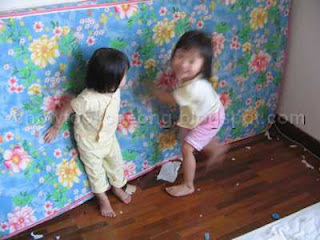 Make sure you have lots of things to keep them occupied and out of harm's
way. This is so that the movers do not trip and fall down and die. 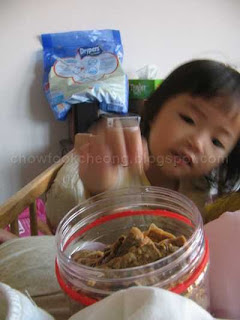 And keep in mind that the kids have a lot of food to eat
in case you forgot about them, and they do not wander
about looking for food 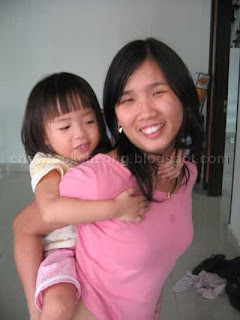 Last but not least, make sure there is an adult to care for
them. But make sure these adults are tough as nails and
can withstand stress caused by children