When I was small (even right now), there was always one thing I would do when I was eating at KFC (Kentucky fried Chicken). I would peel off the crispy chicken skin, take the top off the bun, put it in and then add in some coleslaw folowed by the tomato/chili sauce and cover it back. Voila! a Crispy chicken sandwich.

Unfortunately, after more than two decades, some nut also had the same bright idea and it now, its called the OR Burger, selling for MR3.30. Which, in my case, is a load of crap. 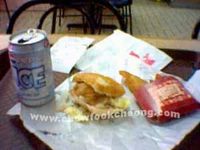 Oh, look! The burger is huge! (For a Liliputian) After being made to wait for 10 agonsing minutes, the burger came, and fell to pieces when I opened the paper. The Wedgies were soggy too.

For years, KFC has tried to come up with various new ideas for their chicken menus which has received mixed responses. For example:

1) Hot & Spicy
(Took a long time for everyone to accept it. Big, crispy and full of oil. Unlike the Oiginal Recipe, you cannot put this in the fridge and eat it later. It would taste like lard. Best to warm up under the oven.)

3) Popcorn Chicken
(This is great finger food. Unfortunately, you can't identify which part of the chicken it came from)

4) Tom Yam Chicken
(This is crap. Even eating shit was better)

5) Shake Popcorn
(It just more flavouring, mostly leftover from the failed Tom Yam chicken or experimental Maggi Mee flavourings, sprinkled onto the Popcorn chicken. If you shake it too much, all you got would be a deformed paper cup)

6) OR Burger
(Please avoid this. I know the one of the poster looked good)

5) Garden Salad
(I am not even going to try this)

And because my OR Burger was not classified as a chicken meal, I could not buy that Puteri Gunung Ledang for RM9.90. Then again, this was the extravagant RM16million ringgit movie which was beaten by a low budget one (I forgot which) and then reduced to Rm19.90 VCD 2 months later. And to add salt to the injury, they're asking us to buy the original because it cantained special scenes. Right. Uncle Ho must be laughing agian.
Date: Wednesday, February 16, 2005 No comments:

Yes! Kristine has my music taste! She was quite restless today as Mommy had to start work. So, by the time we came back, Kristine refused to sleep. However, the moment I put on Yanni's In the Mirror, in less than 25 seconds, Kristine dozed off. Whoooooooooo Hooooooooooooo!!!!!!!
Date: Wednesday, February 16, 2005 No comments:

I got myself a Vanilla Horlicks and a Reflexology In-Sole today, while collecting my MacFarlane Robocop and a few more HotWheels cars. Heh. 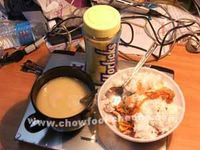 Ok, I had a bad watery stomach ache and slept like a log from 8PM to 6AM. So, what you're looking at is my dinner/breakfast. The Vanilla Horlicks tasted like, well, as if some put vanilla flavour into the Horlicks. The Rice? Its Yee Sang and leftover rice. 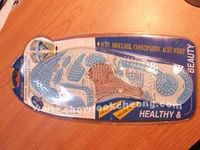 The Reflexology In-Sole. OK, I was attracted to the transparent plastic. 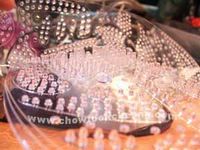 Look at all those torturous bumps. 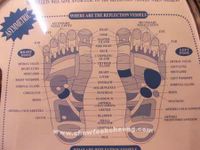 After walking a few Kilometres today, I think I have problems in stomach, liver, shoulder, secondary nasal cavity, pancreas. I;m a very sick person, Oh my. But seriously, waling around with that sole was torturing. 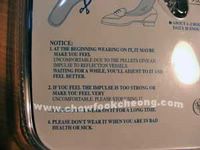 When you want to take them off in the middle of the street, think of the funny instructons