So, after having the Slurpee at 7-11, I was wondering if there is any other place that has this in case 7-11 closes (Ha ha ha). The answer lay before me at ProJET. While I was refueling, I decided to get some drinks since the afternoon Sun was so hot, I could actually sweat out a cup of sweat (Not Pokari Sweat) and drink it back (On second thoughts, better not)

So, Destina (the convenient shop at ProJET) has the answer. When ProJET came into Malaysia a few years ago, it was an "in" thing to be seen frequenting the place there. I mean, where else could you go and pump in the fuel (almost as good as Shell's V-Power), park your car and have a drink/eat inside the station which opens 24 Hours a day? You could walk in and get the latest Soft drinks, Milo, Cofee, Slush, etc. And the food ranges from mini Pizzas to Paus (dumplings) to instant noodles. And depending on location, you can even enjoy a Domino's Pizza too.

And the best thing is, you can oogle at the latest wonderful sports cars which you can never get (if you're living on an Engineer's pay, that is) or even witness some car clubs having their sessions. Sometimes, if you're really lucky, some Policemen would be there to join in the fun and help change the whole atmosphere, courtesy of some cranky old man who cannot get his beauty sleep.

Anyway, you get the picture. So, I happened to see the Slush, er, slushing around in their respective containers and decided to go for a 22oz cup. There were three flavours, ranging from Sour Plum to Strawberry to Lime. So, I decided to go for Strawberry. Unfortunately, the Monkeys there mixed the signs up and at the end, I got Sour Plum instead. For you see, the sign above said its Strawberry and right underneath it, it still say Strawberry. But my tongue, (after some freezing moments) said its Sour Plum. Yeah, that is the problem with Destina and its never the first time they did this. Lest year, there was an offer for some chocolates and so I took a few only to be told its a specific flavour and I have to pay much more.

Once good thing about the Slush is that it has much more liquid than the Slurpee. You can see them spinning around with pieces of ice in there. So, after a few minutes, the ice at the bottom of the cup would melt and you would have lots of (whatever flavour you bought). And another thing is, after you have pumped more than RM25 worth of petrol, you can buy the RM3.35 Slush for a ringgit less! Still, there is a problem here.......

The problem with Destina as after their Honeymoon years, everthing went downhill from there. There is no difference now to any other projects or white elephants, since most of the people running that place have no idea what maintenance is. Look at how they manage Dayabumi and the Shah Alam Sports Stadium. I shudder to think how KLCC would turn out to be in another 10 years time. That is why, when "Malaysia Boleh" (Malaysia Can [do it]), they really "Boleh".

But I spy another Slush at different Destina which has Orange flavour. I wonder if I am going to get the same cock-up or not. I mean, after tasting 22oz of Sour Plum, it sort of made me feel sour about the whole thing. 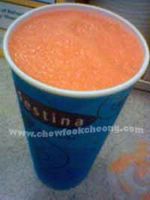 This is the slush. Has much much more liquid than Slurpee 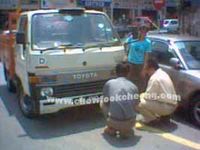 I was passing by Pasar Road today and this lorry hit the butt of a semi 4x4 (owner on the right). The lorry suffered a broken headlight and bumper while the 4x4 got a bent tube (bumper protector). The bad news is the 4x4 is Government property. The good news is, well, I hope there is good news because after looking back at them, the 4x4 was smiling and touching on the petrified lorry driver's shoulder, as if to console him.

Unser on my tail

The Toyota Unser is on heck of a workhorse, no doubt about it. It has great torque and with the 1.8L version, its like fitting a rocket to a van. Its like a step up to those normal white vans driven by monkeys on the streets. Unfortunately, the exterior design lacks the finesse that comes with the characteristics of an impatient brute. So, I am not suprised that a little old lady or a fine gentleman would turn into one when they get behind the wheel.

Yes, this morning, its the same incident all over again. (See Stupid Van Driver) I was in the normal lane and (at almost the same spot) there was this Unser on my right trying to cut in without signalling. So, there is no way I am going to do an Emergency Brake and let this guys pass while I get a kissed butt from the car behind me. So, the Unser guy had to slow down with enough space for him to cut into the lane AFTER I had passed, of course.

Maybe he's not in a good mood or he wants to regain whatever "face" he thought he had lost since there was a lady sitting next to him. Because the next thing I know, he was tailgating me. I know this because he was on my tail even if I sped up. Yes, you know what I am going to do next because he was so close and there is a traffic light coming up, he won't even let me slow down. This is a very dangerous and irritating stunt he is doing to me because I know that he is concentrating on tailgating me and he's is not aware of the traffic situation in front.

If I did the Emergency brake now, he would know I did it on purpose and this would be the start of a beautiful relationship. Coming up to a curve, I have a feeling there is something there because most of the mornings, there would be this suicidal DBKL cleaner who always sweep/clean the plants at the dividers. And they would always put a wheelbarrow at the side thinking that since its so small, most cars would be able to avoid them. By luck, the Suicidal DBKL guy was there (since he is still alive or got replaced) and so I feint surpise and did the Emergency Brake there and then.

Just a tap of the foot, I can see from my rear-view mirror (he has about a half-second reaction) he panicked, his tryres were screeching, and he fought to control the Unser. There were smokes from the tyres as well. After that, he regained speed (and composure) and switched to the middle lane in the hopes of (perhaps) killing me with his deadly stare. Unfortunately, this could not happen because there were other lane-cutters who did the same thing to him; cut into his lane without signalling.

By now you all must have know that I am a little bit cuckoo in the head. I mean, who else in their right mind would want build a Lightsaber now (when you can buy one off the shelf at a very attractive price). With the current technology today, all we can do is just build a fancy torchlight with a coloured tube at the end. But it would be fun if it was real. Anyway, I am almost at the final stage completion. The casing and the electronics are all in and for that last touch, I stupidly lost the switch at some customer's place. So now, I have to buy another one in Pasar Road this Saturday. But hopefully, by this Friday, everything should be ready and I can act like a kid again. Ha ha ha ha ha!


Read all about it here