Yes, sir.My Lordship. Your will be done. I have secured the latest tool of destraction. However, my Lordship, care must be taken at where you aim as such spurts of pleasure can be very damaging. Your humble slave recommends holding it with both hands for a better feel. Never has this slave seen such weapon of mass erection which allows for those hard to reach pleasureable long range shots. With those sexy knobs on both sides, your Lordship can use just one hand to stroke it into readiness.

In the meantime, while preparing for your arrival, this humble slave will pla...er, examine to see if your Lordship's tool is complete. 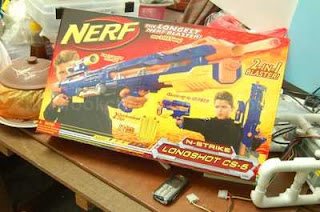 Yeah, for RM149.90, after years of waiting. Even eBayers are
afraid to ship this thing (and its not cheap to do that either). I
don't blame them because the box itself is humongous. After
seeing it, all of a sudden, RM149.90 does not seem to be such
a huge amount. In fact, it made it as if money is nothing.....
Date: Wednesday, March 11, 2009 No comments: Links to this post 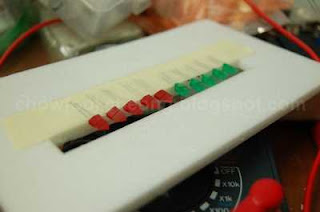 Oh, yes my dear Lord Polyvinylness. The service is
RM8.80 to kick the parcel carrying slave to you, plus
an extra Rm0.95 for the bubble envelope for your popping
pleasure. Do scrub the legs clean but don't spread them
too much or you're really screwed.
Date: Wednesday, March 11, 2009 1 comment: Links to this post

Email ThisBlogThis!Share to TwitterShare to FacebookShare to Pinterest
Labels: nexus

Maintaining your own tool

When you are working on a certain target, your tool is the most important thing. For without it, you are not sure of the results you're getting, or for that matter, any result at all. Not only that, simply inserting your tool in and out at different slots won't get you anywhere. Take my word for it.

So, with efficiency in mind, one must make sure their tools are always ready at hand and in perfect working condition. Do take some time to check on your own tool, you can do it in private if you're embarrassed about your colleagues seeing the condition of your tool but in most cases, many are not shy about showing their pristine tools. Examine it, feel it and test it so that you know its in good working condition. Always use a good firm hand as it can boost your confidence which in turn would make your work at hand more exciting. 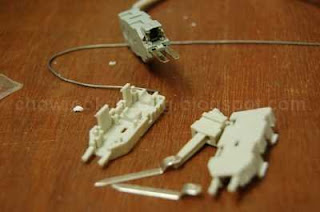 And so, after more than four years in my hand, it broke.
And the replacement is not the same as the quality does
not meet my expectations. Still, with so many slots to
attend to, I just have to make the best of it. The elongated
part really does make a difference as it guides itself into
intended slot. Just make sure the legs are not crooked
or else your insertion would not be perfect. 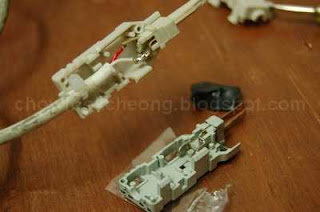 As always, I like to use tools which I can repair or mantain
with my own hand. Because when push comes to shove, the
elongated part will really make sure I am not wasting my
time. The more it inserts, the smoother it becomes.
Date: Wednesday, March 11, 2009 No comments: Links to this post

Email ThisBlogThis!Share to TwitterShare to FacebookShare to Pinterest
Labels: Tools 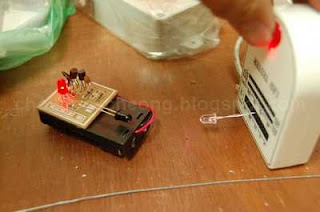 I got this kit when I was planning to build the IR light pen
for Loctor. Unfortunately, the pen in question has gone
missing. Anyway, since I cannot find a nice project box
to house the circuit board and the battery, I just used
some double-sided tape. And I was so happy the kit
can take 3 volts instead of the recommended 9 volts.This
is a very useful tool as I do not want to use the Nikon D50
to take pictures of the Infra-Red LED (as you cannot see IR
light with the naked eye, even if you dress it up with contact
lens.) when I test it all the time. What I do is to use the LED
tester and then when the LED in the kit lights up, this means
the IR LED is working. Not bad, eh?
Date: Wednesday, March 11, 2009 No comments: Links to this post 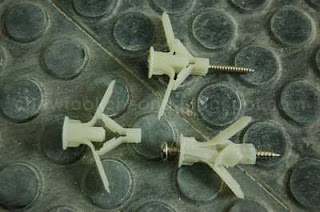 When it comes to screwing, if done right, is a pleasureable
thing. But sometimes, it needs practice. Because experience
will determine the end result even before you start. And not
only that, one must plan first and not go headlong into it. 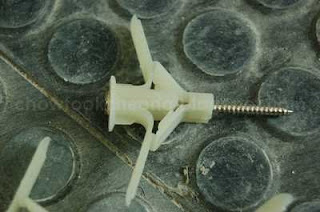 The secret to a perfect screw job is very simple. You just have
to make sure that the intended target is right for you. And not
only that, you have to be patient as well. You cannot rush into
things as these things take time. Just do it slowly, and in a firm
action. In the end, you will get what you wanted. 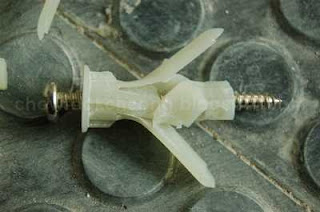 However, sometimes, people will start straight away as more
often than not, it is hard to control the urge when the target
is already mounted and willing. And so, without taking things
into consideration, after some time, you will find yourself
stuck, especially during the heat of the moment when you
realise that size does make a difference. And never ever
force it even if YOU think its alright. It never is.
Date: Wednesday, March 11, 2009 No comments: Links to this post

After reading Suanie's blog about the White Coffee, I decided to have a go. But I have to stop and think first.Yes, the worst case scenario: What if the coffee is crap and I would have to finish the whole pack. And if I give it to friends, they might turn into enemies for Life or worse, feint death when I come visit them. Then again, on the other hand, it might be great (since Suanie has great taste in food) and my friends might kill me for the packets. So, either way, I would be in trouble.

Its not easy with my mind going nuts at the moment as try as I might, I could never remember how the packet looks like. With my Nokia 5800 still at the Nokia centre, it would look silly everytime I go to a shop and pull out an A4 picture of the coffee. The worst thing is, every shop that I went to, happens to have the name of Carrefour and all coffee packets look the same to me. I would only know I have bought the wrong one if the packet is pink and after finishing all the packet, I feel feminine and love Beetles for no apparent reason.

But today, luck was on my side because while waiting for a friend at Puchong's Giant, I found it there, selling for about RM13 or so (I lost the receipt). I was so overjoyed that I did not mind using the money meant for my daily ration of fish crackers (for lunch, la) or behind the "less than 10 items" line where everyone failed their maths in counting. Alas, my guine...er, good friend weezy was not available for lunch today to share in my experime...er, gift. 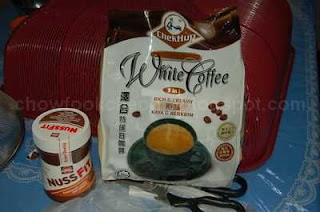 Not did I get the coffee, I got a jar of Nussfit (because I
could not afford the REAL Nutella) in my attempts to
get Kristine eat her breakfast. 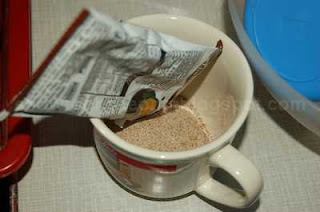 When I first opened the packet, the pleasant smell that
came wafting out was very familiar, as if I had this drink
before. The only think I can remember was that its not
coffee and it smells of butterscotch. But whatever it
was, it escaped me. 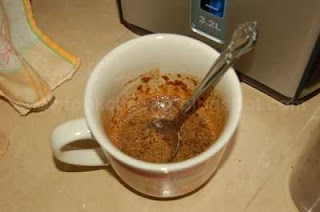 One trick I learnt from an old relative of mine was that she
would use a bit of hot water to mix the powder into some
paste until there were no floating globs of unmixed gloops
left......hah?
Then, you just add more hot water or cold water, or not
so hot water or not so cold water. But whatever you do,
don't even try it with Tonic water, Kickapoo, Kahlua or
even Brand's essense of chicken. And ketchup or chili
sauce is a definite no-no. But its OK if you mix them
all together for the Heng Tai session when the Groom
comes for the Bride. However, Kahlua is not cheap.
And neither is drain water. 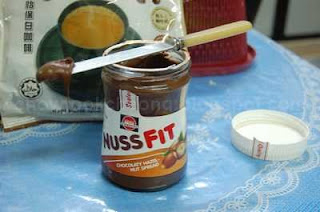 Come to think of it, you'd better not add this to the
coffee either. Just toast it, spread some butter and
then this. But do not add cucumbers, Marmite
(or Bovril) or peanut butter even if you feel suicidal
today. No point being beefy nut who's cool but dead. 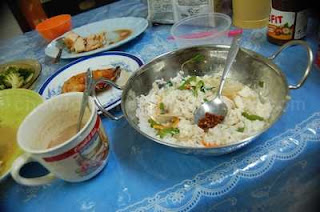 And so, after a few sips of the coffee, I am in the mood for
dinner. Here, you can see my dinner on the mini wok with
the leftover soup, tofu, brocoli, green pepper all mixed
with the rice. The coffee is so good, in fact, I am going to
have one after this. And just in case, another one with
hot water. And another one to make sure its coffee and
maybe one more before bedtime. And I should sprinkle
some of it into the Nussfit toast for my snack.

[Update: 11032009 0314]
Oh-oh. I still can't sleep and my heart's going thumpity thump. No, I am not addicted to coffee as I do not like coffee much unless its those Iced ones from Starbucks or whatever. Maybe I should take a cold coffee to counter all these shaking. And another one after that, as I am a bit thirsty. And maybe, I should try mixing it with Milo for that special Neslo feeling......

Sure Chek Hup (pronounced chekup, as in Cantonese for "instant") Jing San ("alert") effect one.