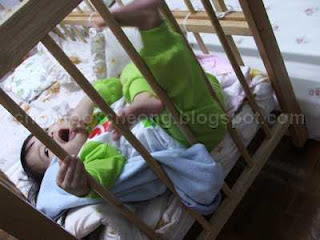 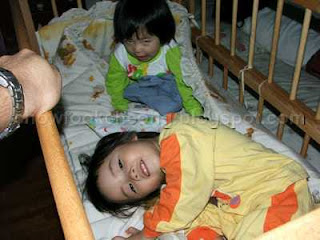 So, Kristine decided to make the best of the situation 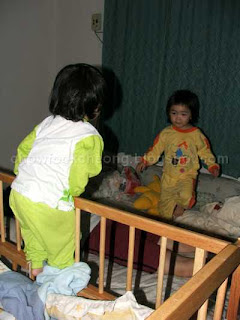 After shooing her away, Kaelynn wanted to follow her sister 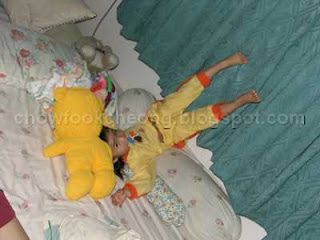 Which we did not allow because she wanted to do this

So stupid of me. On Thursday, unknown to me, my office received a call or a recording in Mandarin, telling us to go to High Court on Monday, 10th of September since we missed the first one on the 21st of August. I had no idea about this call and the only vague clue was when my Boss asked about my case with the Road Bully, which I told him that there was no action on his side and we considered the matter closed.

Which I assumed that it was. But it was not until on Friday that my Boss told me about the incident. And it was the day that I took leave. After some calls to Kal and also another friend, I decided to attend the matter on Monday to see what happens despite the fact that I was informed that it is a very high chance that it is a scam. I was quite worried and pissed off. Worried because if the Road Bully actually did challenge me, then I would have to be prepared for the worst since I have never attended Court before and also, where to get the monies to hire a Lawyer. Pissed-off because my Boss decided to think for 24 hours about this matter before telling me. But I did some speculation too, which I presented to my Boss and now, he is a bit worried. Ha ha ha ha.

So my Friday leave was ruined and I spent the rest of the weekend thinking about this matter to no end. I did not want to tell my Wife until I know the real issue about this matter since I do not want her to worry so much. So, there are three possibilities:

1) It is the Road Bully
So, maybe he wants to challenge me since his idea of being right is in his favour. But I was assured that the pictures and Police reports I have are proof enough to settle this case once and for all. Moreover, such small claims would never reach the High Courts and would be thrown out anyway.

2) It is company related
If this is the case, then my Boss has a lot to worry about. But since we do not have any enemies, this is also improbable. Unless that accountant wants revenge for not being hired back after she resigned for another company and got “side-lined” when they found out she was pregnant. Or maybe, its some enemies from my Boss’s history that I do not know. But if this is the case, it would also change our company and in the worst case scenario, I/we would have to look for another job. Just hope that we don’t have to go to jail, that’s all.

3) It is a scam
If it is a scam, then all is well. But deep inside me, I am curious as to the nature of the scam. Yeah, me is busy-body person.

Come Monday morning, I walked up to the Guardhouse to enquire where to go for enquiries about court cases. After telling the Guards about my story, she told me, while chomping her chapatti, that it is a scam from China or Taiwan. She continued that the symptoms are usually deep Mandarin that was used. So, I was advised to file a Police Report and go home. I was relieved about this as she told me many people has been conned and so, I must be careful not to reveal my IC number and other particulars to these people. And if it’s a real case, we would have a letter from the Courts.

I was so happy as suddenly, a heavy weight was lifted from my shoulders, that I went back straight to work…… 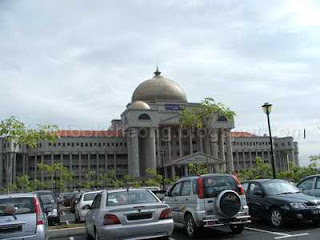 This is the new Courthouse. Although the parking space are adequate
for the moment, there are a lot of people simply parking at spots that
they think are the best for them. Unfortunately, this narrows the exit
Date: Monday, September 10, 2007 1 comment: