OK, some parts of my Website is ready, but it is more for doing electronics and stuff. The personal side, I am not sure if I can finish them since this took me about 4 days to complete. 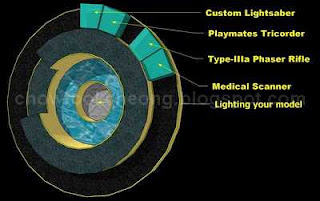 Click, click! And we're no longer in Kansas!
But I am not sure if these finished products
are for sale yet, but I hope to, in the future
Date: Monday, February 26, 2007 No comments:

Email ThisBlogThis!Share to TwitterShare to FacebookShare to Pinterest
Labels: Announcement

Our Anniversary was coming up and I took my Wife to a rare shopping trip in Sungei Wang. Well, it is rare because we seldom go shopping for ourselves, even after Chinese New Year as we need all the money for PAPRF (Post Ang Pow Recovery Fund). Most of the time, if we did shop, it was at Carrefour, Giant, etc. to buy nappies, food, etc for the two monk.., er kids. So, by the time we were there, we bought a few things which totally wiped our savings. OK, so I was the culprit but my former watch was already 7 years old and quite scratched. We also wanted to buy those 8in1 Barney DVDs (heh heh) but most of the shops were "closed" as there were some raiding activities going on.

At first, I joked about never needing to buy a watch that is costs more that Rm1,000 or near there because they're usually more for formal wear and not for me because I keep scratching mine. Then when I went to my friend, I was interested in it. The price was RM799 (and at a later shop, it was priced RM999) but because I knew him, and I was offered "Brother price" it was too good to miss. With my approval, we got it on the spot. I cannot tell you the price but some of you who worked in this industry would have known about it but to me, my years of pining is over. Now, I just have to work herder to pay off the debt. Ha ha ha ha. 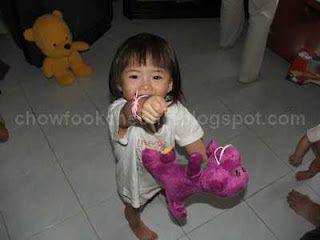 Kristine showing off her Barney and watch
Half an hour later, all of us got sick of the
Barney's "I love you.." song as Kristine
kept squeezing its tummy to play it.
But poor Weenie (in the bacground)
still call the shots as Kristine still
hugs her when sleeping. I wonder,
if we had bought a bigger Barney... 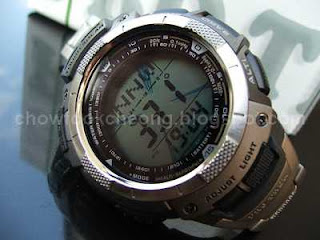 This is a Casio PAG80T which has a compass, a barometer, a temperature
reader and also a altitude meter. But to me, it is a nice replacement. There
was a GPS version, but I think, "Let's not go overboard" 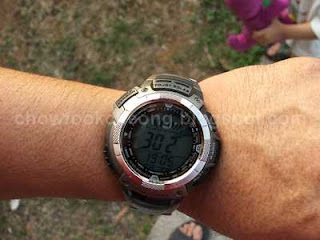 The watch, although it is big, is quite light on my hands. And if I turn
the "auto-EL" on, when I turn my wrist, the EL light will come on.
Very good if you're climbing and you only have one hand to tell the
time. But they manual has warned not to turn it on if you're wearing
sleeves as it will drain the built-in batteries. Ha ha ha ha
But seriously, it is so big and chunky, I kept knocking into things.
My friend told me that even though I scratched it, the scratch lines
would be just like the watch, Titanium and not the ones you see on
coated metal. I think I can also use it to knock people's head as well.
But seriously, I think this feature was done on purpose by Engineers
as a joke. Because, if you've seen a person holding a glass in a dark
corner and you come up to him and ask him for the time..................

The glass lens collects power from light and charges the
rechargeable batteries inside. If you keep the watch in
the dark, it will go into "Power saver" mode. Ironically
I promised myself never to buy Casio because of their
"1-year" period (where the watch dies, in my hands)....
Maybe its just me. Damn

The battery's charge indication is located at the bottom,
marked "L, M and H" if it reaches L (Lia ma), it means
there is not enough power and most of the functions go
bye-bye. So, it must be at H (Ha Ha Ha) level

The manual is about almost 2cm thick but luckily, its in five
languages, but there are still a lot of information. In the end,
with the two kids around, I only got up to page five or so and
random read a few more pages. So now, after paying so much
for it, I only know how to tell the time and also not to accidentally
press the "COMP", "BARO" and "ALTI" all the time. Ha ha ha ha

But secretly, I wanted something like this.
This is a watch similar but not, from the
Final Fantasy:The Spirits Within movie
acts like a Tricorder with Hologram
readouts as shown by Dr. Aki Ross

I went over to Low Yatt's Sri Computers to buy this mouse
It has 7 buttons and can be used on shiny surfaces, etc. I do
not care about that but what was important were the two tiny
buttons on the left which allows me to switch pages forward &
backwards. Funny thing is, it doe not glow red like those normal
optical mouse. Also, they caught a thief there, who kept hitting the
staff. So, they "moved" thief to the office as there were a lot of
customers watching. Later on, after the screaming has stopped,
I overhead some of the staff discussing they the poor thief might
need some ointment (Tit Da) as he is beaten quite badly. But then
again,t he thief is quite tall and big. Who kow if he is really a thief
but the staff did recognise him at first, I thought he was just a
disgruntled customer or a drunk. 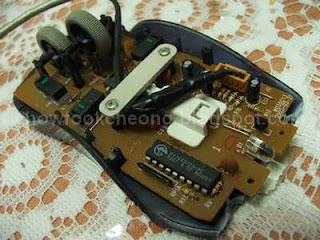 This was my former mouse. For over two years, I had to
repair the USB cord, the buttons and also the connectors
for RM55, this is quite a good mouse, mainly because of
the two buttons on each side, my work (at the time) was
done much quicker. OK, so without the covers, it is quite
uncomfortable and painful

Gambling at the In-Laws

It happens every year. We go there, and they open a Casino. But luckily, they do understand my incompetence at gambling (and also alcohol) so they left me alone. Still, it was a good time to talk to them, see how they're getting on and also repair stressed relationships. Me? I was enjoying the French pasta and Domino's Pizza. 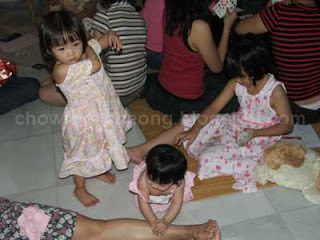 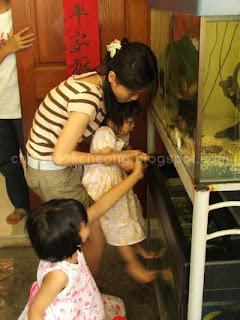 And again, Kristine was allowed to feed the fishes 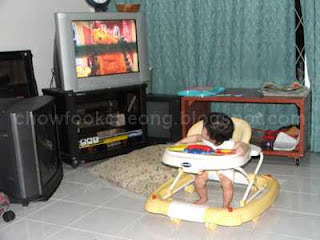 After coming back home, everyone was tired except
for Kaelynn, who is enjoying Astro's "Bear in the City"
Date: Monday, February 26, 2007 No comments:

Email ThisBlogThis!Share to TwitterShare to FacebookShare to Pinterest
Labels: Celebration

Since Kaelynn was starting to walk, and after much persuasion, I decided to take out Kristine's walker and use it on Kaelynn. But there is a slight problem because Krisitine was still quite attached to her stuff. 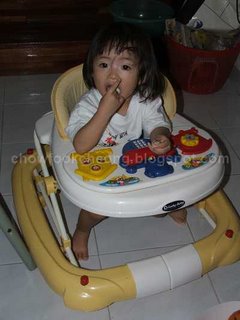 When she saw it, Kristine immediately went for it 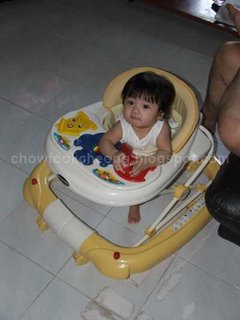 After shooing her off, I managed to put Kaelynn in 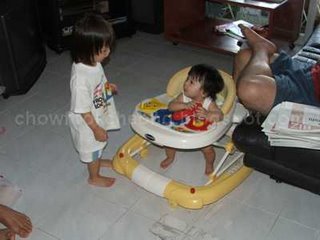 But Kristine was jealous and a face-off ensued 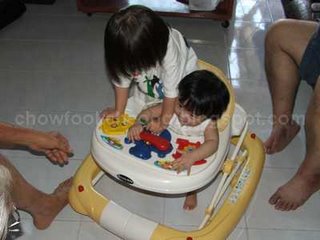 Since she does not know how to make Kaelynn get out
she decided to get in, much to my concern because
Kaelynn's bones (her back and chest is being pressured)
was soft 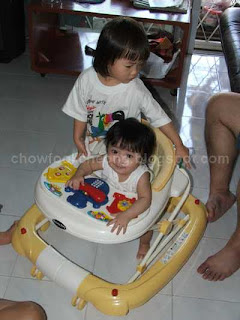 Being a little sister and still did not understand
what the fuss is all about, she still let her elder
sister have her own way. Here, she is telling her
Uncle to "Move that foot"
Date: Monday, February 26, 2007 No comments:

Kaelynn is now able to crawl quite fast and just recently, she has started to use object/obstacles/my face to stand up without falling (much). So, this is progress and I am so happy. 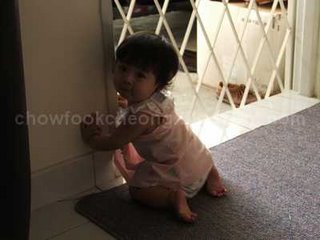 This is her using the wall for support 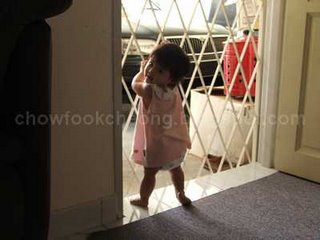 And then using the grills to stand up. I just hope she
does not climb them like Kristine at this time
Date: Monday, February 26, 2007 No comments:

After the Ang Pow ceremoney, it was time to go to my Mother-In-Law's house where most of the In-Laws are already in-doors. Then when the Dogs barked, both girls cried non-stop. (Nearly had a Flash-flood there). I have never hear Kaelynn cried so hard since months ago and this was her first time crying as usually she smiles all the time. Then when she realised she was safe, Kristine taunted the Dogs and also fed them at the same time. But poor Kaelynn, she was still crying. Only when she was either in our arms did she stopped crying. This is distressing because when others carrid her, she would smile or just wonder in amazement that no on elooked like us.

So, it was a full day of pandemonium with them either crying or running all over the place. 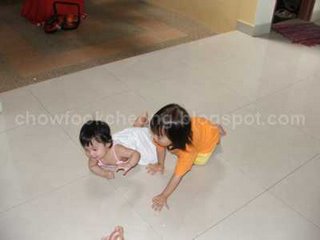 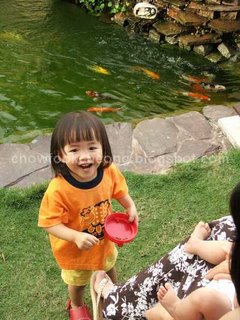 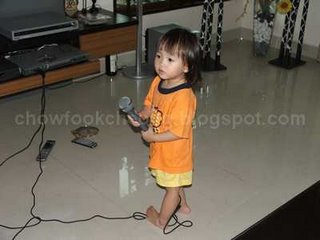 And also bring the house down 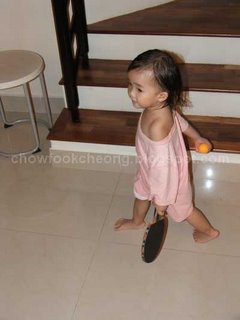 After that, in the evening, she invented a new game 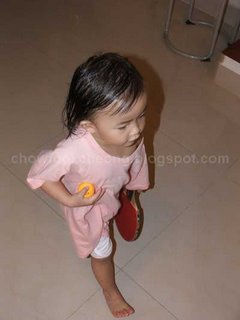 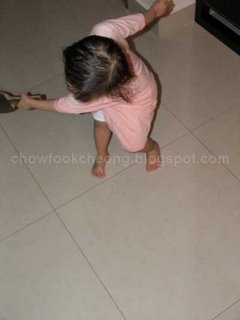 You swing the ping pong ball to another area

Email ThisBlogThis!Share to TwitterShare to FacebookShare to Pinterest
Labels: Celebration

So, this is the year of the Boar and many people said it is a bad year for me. Haih. Already, before the first week has passed, I am already in trouble. But anyway, let's see how things goes. But let me tell you, already I have lost my temper, we're on the verge of severing family ties and also Hospital bills. Damn sui, la, I tell you. 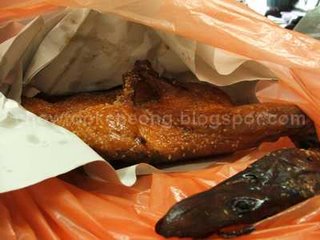 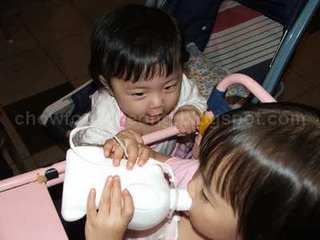 The girls during CNY Dinner
Kaelynn was climbing the pram trying to eat/drink
what Kristine was having. 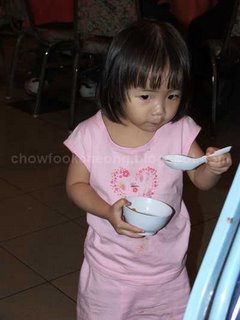 OK, so she can feed herself (and run away with the bowl) 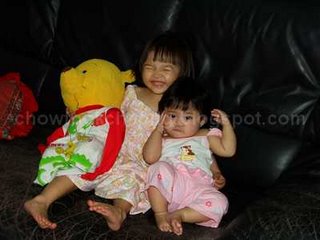 The girls during CNY ang Pow session
Yes, they got a lot of Ang Pows.
Date: Monday, February 26, 2007 No comments: