I used to pour in the Bardahl in my car after every oil change but nowadays, I tend to forget, especially in the last few years. Ha ha.


What I liked about Bardahl is that apart from using Petronas petrol, it makes the engine feel even smoother. But you have to be careful when you pour in the engine oil; you have to make sure that there is enough room for it too. Yes, although its a very small fact, the impact is well, volumous. And your car might start to be a smoker. 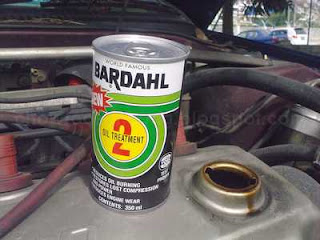 As the engine gets older, I have to use Bardahl #2.
Or was it #1? I forget. But do read the label as it
has versions for diesel as well. 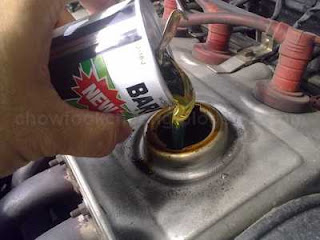 Hmm..... I don't remember pouring the gunk this
thick. 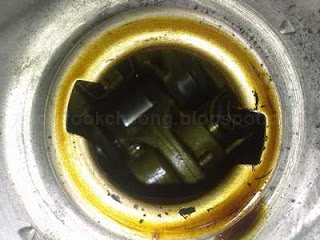 Its all in there. Although you can't see it but
the engine oil has bot been changed for 15K
Km already. I just keep on topping it up.....
And so, how does it feel?
For the first few days, the car felt like it was very light and smooth. But after that, it went slightly back to normal. But one thing I did notice is that my A/F meter, which averages on the 14.8 scale, the reading has gone up to 15.2 (the higher the better) and goes to 16 on Highway cruising. And then, the car responds well when I press on the pedal lightly. I am not sure about petrol consumption though but maybe for the next few tankfuls, I will know.
Either that or it must be the effects from the cotane booster I poured a weeks ago.
Date: Tuesday, July 06, 2010 1 comment:

Email ThisBlogThis!Share to TwitterShare to FacebookShare to Pinterest
Labels: Bengmobile I

Just read somewhere on the Internet that a Thai lady can tell if a guy is a virgin or not by looking for the red dot behind the ears. Wow. If that is a sure-fire way to detect one, imagine how effective it would be in solving a lot of problems. 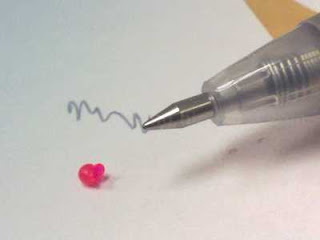 I can, with all authority invested in me,
prove to you that this pen has not been
used before.....
Date: Tuesday, July 06, 2010 No comments: