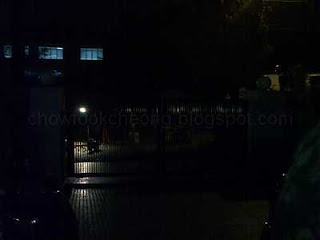 Me cam beck and this dem grup here dig a dig road
Dey dig a dig a, and dig a dig a big hole. Cof in for a
big hors? 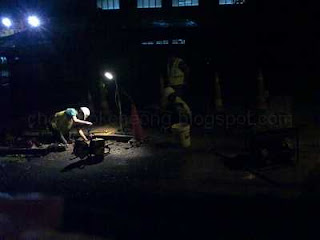 Mid nig, they stel do did a dig a, dig a dig a road.
Hiaz, larki me car still out dere and morrow, fetch al
wife kids 2 schulz.
Lerkee they stop dig a dig a now. Thn they a thump a thumpa de road. Makin no sleepz for a peoples lke me. Haiz.

It finally came. thanks to Jonathan Dei. And I was feeling quite excited too. 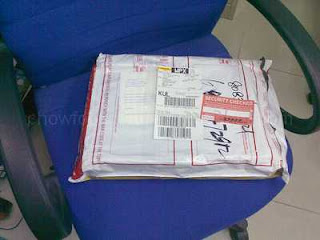 Had to keep this as casual as possible knowing a
certain busybody at the office that can cause a lot
of damage and rumours. 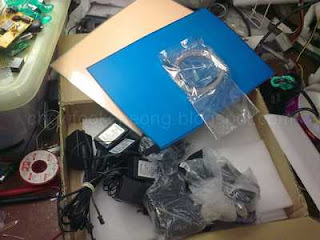 Back home, when the parcel was opened, I got one
A4 White and one A4 Blue EL sheets plus a metre
of white EL string. The rest are the 12 volt PSU &
their inverters. The inverters are very important
for the EL to light up. 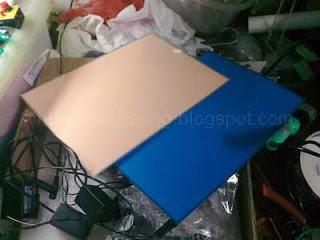 This is how the EL sheets look like when not lit. The
inverter has a switch which allows you to switch it
on or off and a simple flashing mode too. 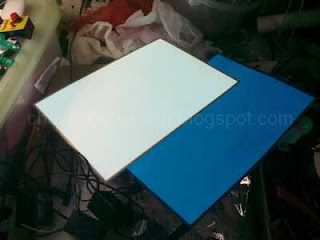 And this is how it looks like when lit. Notice the white
one glows brighter than the blue. This is just a simple
test. Once I have the time, I will see what else I can do.
Now, this is how an EL looked like when lit. And so, maybe its the inverter or something else but the actual fact is, EL will never be as bright as you want it to be, when you want it to be in my case. Still, I plan to cut it into smaller strips, which in effect, reduces the area and maybe glows even brighter.
Date: Tuesday, March 08, 2011 No comments:

It was a very nice feeling when I rushed back. This was because for the first time, the girls rushed out and sang THE song for me. Yes, I was late because I completely forgot about it and was stuck in a evening crawl which made me call up a friend to pass the time which, lead to *ahem* a quick dinner.

But rushed home I did and all of a sudden, the roads are clear. Very, very clear, I must say. And with wife sounding very sweet and happy on the phone, this means two things. Either I am in for the chopping block or, well, its still MY day after all. 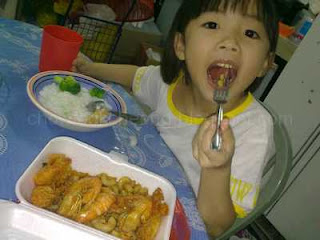 And they're enjoying the takeaway I got for them on
the way back, which was spicy macaroni and biiig prawns 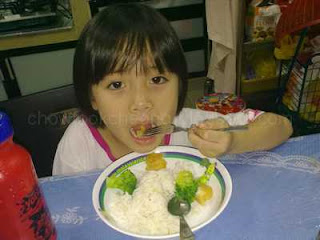 Kaelynn only ate one because she realised the dangers
of eating too many prawns since she has more or less,
the same allergy I had when eating the WRONG type
or species of prawns. 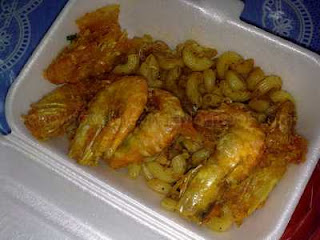 Nice or not? I loved this macaroni during my younger
days because it was well, spicy and I was still used to
eating pasta. Price is a bit more but then again, it fills
you up quite a bit. 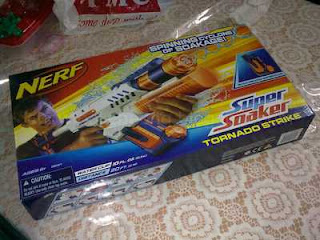 Days later, my brother SMS-ed me that he saw this
NERF at Carrefour. I told him I had no money unless
that was my PRESENT, I jokingly replied. The next
morning.......... OMG! Thanks, Bro!
(But might have to clear it with Wife as I think
she suspects I bought it myself....)
Date: Tuesday, March 08, 2011 No comments: 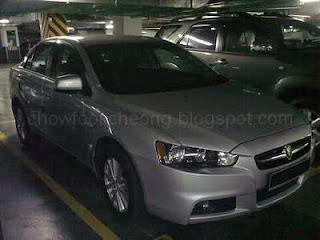 Man, after looking at it really up close and without
the red paint and side skirts, it reminds me of a
Korean instead. Sad, but how I still wished for one

Just ike my Bengmobile, there is only one 12volt outlet, which is reserved for inflaming some tobacco product. And as usual, out it goes. And in come my Mobile Phone charger. But knowing me, one outlet is not enough and so, I decided to do something about it as there will be some projects in store later on.. 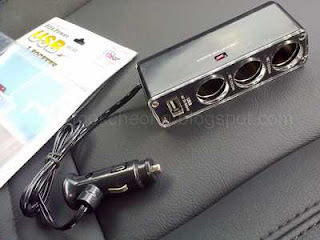 For RM19.90, this was the cheapest I could find, that is
after I bought it, Mr. DIY was selling a model similar to
it for RM5.50 or something like that. 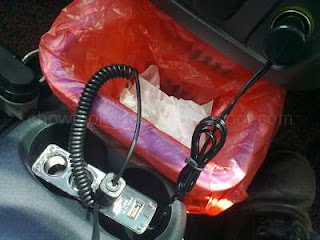 Anyway, I decided to test it out for a few days before
mounting it permanently. Not only that, I have not
decided where to mount it on since there is not
'enough' space inside. If I mount it on the middle
console, one push of the seat to the front will dislodge
it. And the same goes for the glove compartment since
Kristine might be kicking it by accident due to her size. 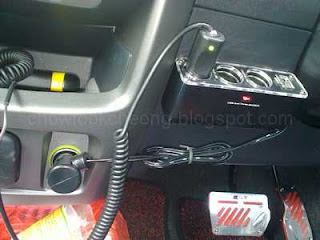 Finally, I decided to stick it on the driver's side, jsut
next to the steeting column. Yaaaay! 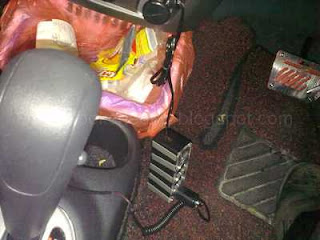 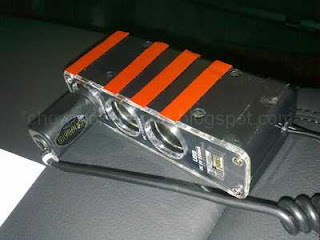 So, its another try with the clear acrylic super
duper mega sticky double-sided..... thing.

And so, this morning, about 0840, Leena from Glass Doctorss called up and asks when can they come over. So, I told her that they can come over to my office's parking lot before 10AM because that's when I needed to go out for an appointment. I wanted them to come over last night but because Kaelynn was having a fever (which we needed to take her to the Doctor's) it was not possible. Therefore, I was thinking of pushing it to Wednesday instead.

But after Leena's explanation, it was better to get it done soonest possible. And so, half an hour later, Matthew came and proceeded with the repairs... 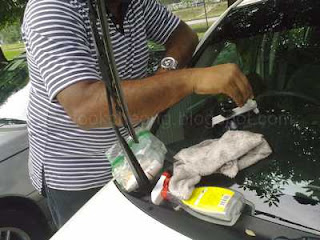 First, he cleaned the glass thoroughly so that there are
no contaminants that could affect the repair job. 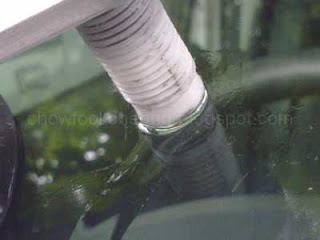 Next, he applied a cleaning solution on to the crack to
try to remove as much dirt INSIDE the windscreen as
possible. Matthew explained that the windscreen has
three layers and the middle layer, which is clear plastic.
So, the big sized crack earlier was actually caused by
the expanded air bubble between the plastic layer and
the upper glass. So, once that has been treated we get
to see the actual size of the crack. The next stage is to seal that crack as much as possible
and this is where Matthew puts in another tube, which
is a type of resin that has the same optical refractive
index as the glass and it cures/hardens under UV light.
Do not be fooled by this simple money detector. It can
still blind you. 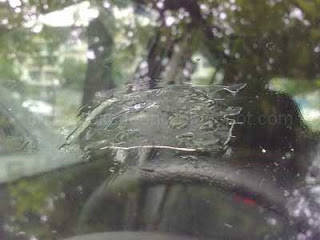 A few minutes later, the chemical starts to harden. 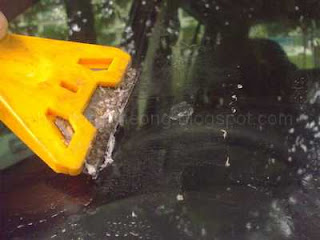 After removing the clear plastic, Matthew then scrapes
off the excess. Now, the crack is repaired even though
it still has a small cavity. Matthew explained that if it is
not repaired properly by now, it could cut his finger
when he ran them through the crack repeatedly. 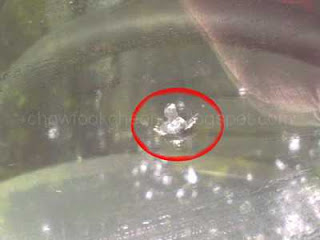 All done and well, you can still see it but Matthew assures
me that after a few days, the chemical will blend into the
glass. It is still shiny and all because it is new whereas the
windshield is not. As for me, I am not so bothered by this
as long as there are no more cracks on the windshield.
But looking at the warranty, because mine is still a 'small' one, I am covered in the Lilfetime waranty. I am not supposed to use any water repellent (Rain-X) or any other chemicals to the windshield which will erode the repair chemicals. Which is fine by me since I do not put Rain-X or something like that anyway. But I wonder of windshield washers could be a problem too?

So, how did I find Glass Doctors? I just Google, "Myvi glass repair Malaysia" and there they were.
Date: Tuesday, March 08, 2011 No comments: