This is our second Ipoh trip in just a week. We were there last week but I did not feel about posting it since it ended up with us witnessing a kitten being squashed by a motorcycle and then a Chevrolet driven by a lady.

Anyway, this time, I am not bringing my assistant since he is not experienced enough to help out. He would only be slowing us down. And so, I brought my technician along. He was joking the other day about setting off at six thirty in the morning which I quickly replied that it is the correct time. But I gave him seven in the end.

By the time I reached his place at six thirty, he was already in the bathroom. By the time we were ready to leave the Sg. Buloh toll, it was eight thirty in the morning. First, it was because I was waiting for him, the van's bettery died in less than ten minutes. I should not have done that and so, I ended up pushing the van up to speed for us to start it. Then the series of other events such as his tools being left in my assistant's car (in Rawang) and we had to go back to the office to scrounge up spare tools, have breakfast and got stuck in the abnormal Sg. Buloh jam.

We had to leave early because the van's speed limit which would take up about close to two and a half hours journey compared to a normal car. And not only that, the customer would be moving in today which I anticipated a really huge delay.

Fortunately, it was not to be as the distributor of the system came in at eight thirtyin the morning and got most of the wiring done. What was left was to dismantle the remaining interface cards and bring it over. By the time we were finished, it was already half past five. The main delays were us looking for their phones which they were bringing over by themselves, rewiring the phone panels (again) as I told the main-Con not to go it but to leave it for us and also moving the big and heavy reception desk. 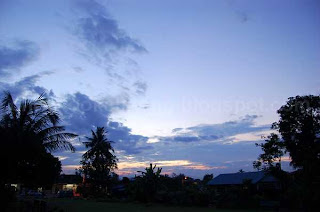 While waiting for my technician to get ready, I shot
this outside his house at seven in the morning. Had
to use the tripod, though
Publish Post 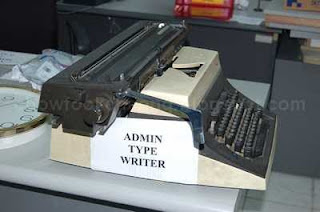 Admin's Type writer. But when I saw it, I thought about
Admin's type of Writer which is usually a laser printer
and not this writer. Yes, I am that bored.
Date: Saturday, May 10, 2008 No comments: Links to this post