Mixing drinks is nothing new. As a kid, I mixed drinks as well:
1) Plain water with Ribena (Ha ha)
2) Hot water with Milo, sugar and milk
3) Jelly with Sarsi
4) Sarsi with Ice Cream (Root Beer float was taken)
5) Crysanthemum with black jelly
6) Fresh Oranges with Ice Cream soda, and so on.

However, there are some rules which you must observe when mixing them with softdrinks:
1) Never mix with stuff that have milk (Ice Cream is OK)
2) Never mix stuff that uses powder like Milo or Coffee
3) If your brain says the drink will taste like crap, you'd better believe it
4) Never mix fresh orange with Milk (A few years ago, I though it was a new bubble tea)
5) You cannot mix with sauce (Such as Mayonnaise, Pasta, etc) but maybe Tabasco is OK.
6) Drinks that can be mixed are usually transparent and not cloudy. And so on.

Today, I happened across Pepsi's latest drink, which is called Pepsi Tarik. For those who are not familiar with the word "tarik" (to pull in Malay), it is an action whereby the person who makes the drinks (usually a Mamak who is of Indian/Muslim origin) pours the hot drink from a mug in his hand downwards to the other mug. This thus cools the drinks so that it won't burn your tongue. The types of drink that they will tarik would be the Teh (Milk tea) and Kopi (Coffee) and anything that is hot, except meals.

Pepsi tarik is actually Cola with Coffee. Yep. Why they call it Pepsi Tark, I am not sure but it could be a lame attempt to localise the drink. Whoever came up with this drink must be drunk at the time.

Because it tasted like crap. To be more precise, its watered down Cola with hint(s) of Coffee. For those who loves Nescafe, you would be pissed off because the coffee tasted more like those cheap coffee sweets. I had to force myself to drink the whole damn bottle (or waste RM1.70). I wished I had stuck to Pepsi Twist.

Still it is a good try by Pepsi compared to Coca Cola with their crap Vanilla flavour. But I do so wished that they experiment it INTERNALLY before releasing it to the market. Its so easy. Just blindfold the employees, tie their hands and get them to drink it. If they do not throw up, die or go nuts, then the general public (or 4 out of 10 gullible people) might like it. 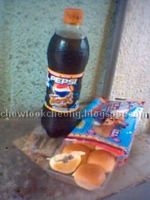