The Nerf gun is here!

I was at JayaJusco yesterday because of some matters at the Post Office. While I was there, I decided to stop by the Toys Department and then I nearly had a heart attack because I saw this!! 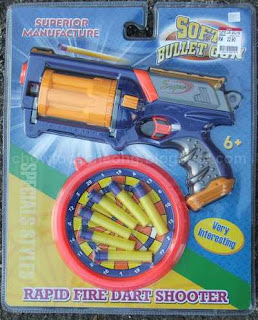 This is actually a copykat Nerf Maverick. One of the Nerf guns I wanted to get as they do not have them here in Asia. The only way to get them was from eBay or from Internet but both would be very expensive not to mention the risk at the Customs.

I was so excited, I got two of them and today, I think I am going to get more. This is because the Nerf guns are for a certain age group (not kiddies) and because of that, their proportions to an adult's hand is quite real. Already there are a lot of things that can be done (on the Internet) such as painting them, modifying them to be more powerful and so on, and they can sell it on eBay. Anyway, for my part, a friend has suggested to put some electronics into them. The packaging for the toy is quite big so you cannot hide them easily once you bring it on the street or to your house. 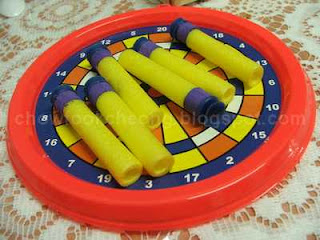 Apart from the gun, they give you six crap foam darts and a plate
in case you stop by the refrigerator during your battles 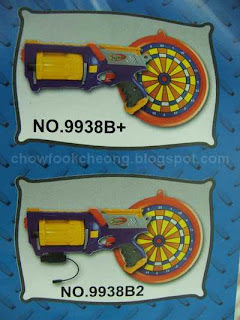 After looking at the back, there are actually two version of the gun. Unfortunately,
Jayajusco only carry the one without the laser module 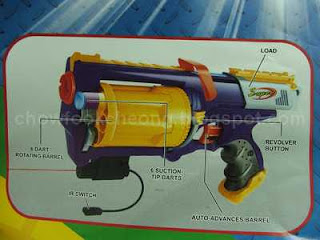 And they call the laser module, Infra-red, maybe to escape
from some Toy rating since the word laser would get a lot
of attention. 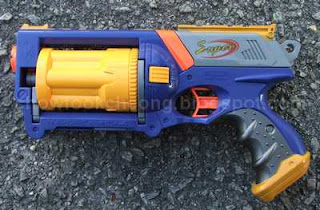 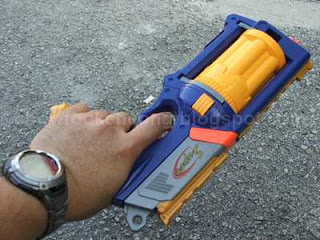 And it is 12-inches long which makes it big and bulky
But if you paint it black, it would look very dangerous
So imagine carrying two of them for your costume
or work clothes.......... 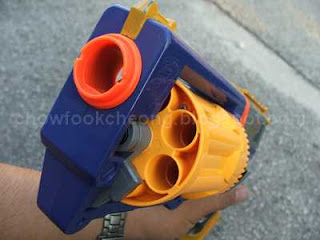 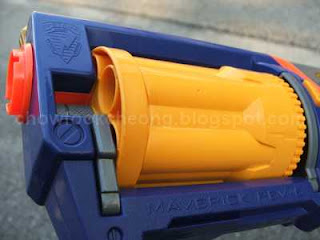 The "N-Strike" and "Maverick Rev 6" wordings are still
there on the gun, which I presume, they got the same
moulds like Hasbro's manufacturer. So, I can say, this
is a very good copy of the original 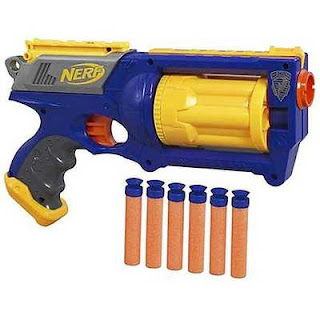 Looking at Hasbro's website, this was the original
paint (and plastic colour) of the Maverick. So, the
copykat has almost this colour scheme 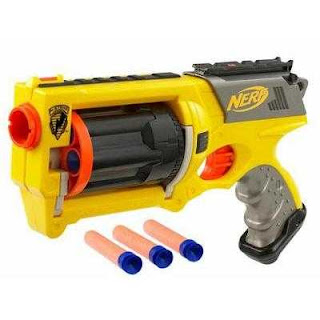 Before they all went Yellow
They mentioned the Maverick has the fastest shooting rate
because all you have to do is pull the slider and press the
trigger for every one of the six darts. I tried it and yes, it is
fast. But, also, if you're really into it, you have to keep
another Maverick spare because of the slow loading time