One of the first things a baby can do, when they realise they can move by themselves, is to cause trouble. And when it comes, you'd wonder how can such a small person can do so much.

So, Kristine has now learnt how to roll all over the place. Which is fine until this morning.

Because rolling around in the bed with us (still in it) with a loose nappy full of fresh biological waste is a major disaster. Both of us were not aware of the situation (becase we're still recovering from last night's adventure) until she got whiff of a very bad smell (no, I did not fart)

By then, it was already too late because Kristine had rolled all over the bed and, well, you can imagine the rest. By the time we finished, we were a week ahead of our laundry schedule and pooped as hell. Kristine, being a baby, gave us a very nice innocent Angelic smile for our efforts........

OK, here's the thing I did with those Zoids figures 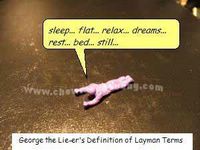 A night to remember

Since we had a relative coming down to visit us, our family SOP (Standard Operation Procedure) was to take them out for dinner. We had a few choices such as:

1) Teluk Gong (news about night robberies were not that inspiring)
2) KFC (Well, they had them there and our chickens are shrinking)
3) Some "Tai Chau" (It was fully "booked")
4) PJ Seafood Restaurant (What the heck, its still like Teluk Gong)

So, we went to our favourite haunt called PJ Seafood Restaurant. Its located next to the Tropicana Golf and Country Club. A few years ago, this empty plot of land was converted into a place for fishing and the restaurant was next to it. And because Tropicana was taking off, there were a lot of houses built nearby it. The result was that the restaurant was demolished to make way for more houses. But the funny thing was, it was rebuilt in a matter of weeks (Yes, its a very popular place)

So, we brought our relative there and as usual, it was jam packed. There were others having the same idea of bringing treating their guests, having a family's night out and so on. Anyway, after a few attempts of getting the waitresses attention we had our meal set for the night:

Suffice to say, the first dish was always the highlight because (a few years ago) its new. By the time we finished, there were some signs that things were going downhill.

1) Uncle Ho's Agents were not there to sell us any DVDs
2) Lottery Ticket sellers were there in case we can't pay for the food
3) My Wife had a headache (No, we're planning to sleep tonight)

So, by the time we came home, she was really dizzy. For the rest of us, the food was not that bad since no one had any problems. Once we had the baby settled, and after a few trips to the toilet and some gargling, she was fast asleep. So everything was fine.


Until my bowels decided to have a party. I was in the toilet for hours until 430 in the morning, and the liquid that came out from my bunghole looked more like black sewage. Byt one thing for sure, I sucked at my PDA's Solitaire.
Date: Sunday, May 29, 2005 No comments: Links to this post