Good luck to you, Mrs Fabian!

You know what? Today is a nice day. And one of my friends is getting married. We have been neighbours for quite a long time without knowing each other. And all it took was an Internet Forum and that incident on the road.

The wedding was quite interesting as teh Groom did arrive in style. But because someone (or everyone on the Groom's side) did not follow the instructions/schedule, they were at the mercy of the two cute and sexy ji-muis (bridemaids?). For you see, according to customs, the Groom cannot enter the house until after eleven in the morning. This is one example where arriving early has no benefits whatsoever. And so, the two ji-muis were relentless to the point where all the Groom's Heng-tais (support and best man) deserted him. By the time he has done with the adulterated biscuit and the tea, the poor Groom has difficulty passing the last stage, which is to sing with his already sore throat. I think this was because they (The Groom's side) accidentally pointed the roast pig's rear end at them in the first place.

The day went well except for the emergency part where the Bride had to rush to the washroom in the restaurant. Oh, and I met some old friends there too.

Because she values her privacy, I have not had the chance to ask her permission to post photos in this blog. So, no piccies for the moment, ok?
Date: Sunday, September 16, 2007 No comments: Links to this post

Because there was an hour delay in last night's dinner, my Wife and I went out shopping for a bit and that's when I saw the gun. Ever since I saw (bits of) the anime Trigun, I was obsessed with the revolver. Although it does not look like it compared to this one, I still wanted that toy. Yeah, I am obsessed with guns (but not in using it as I hated the noise it makes). Anyway, although its made in China, I believe that this is an "original" design. And boy, I can tell you this: It is huge/long. 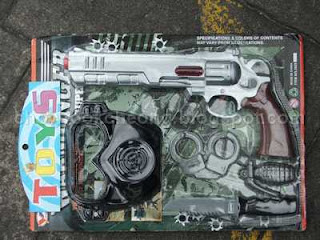 Just the gun, please. I am not sure what I can do with the
rest of the items in there 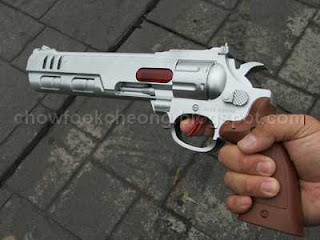 Yes, this is a very long gun and when you pull the trigger,
sparks will fly. And then again, maybe not. Its not easy to
test the guy in public or inside the toilet 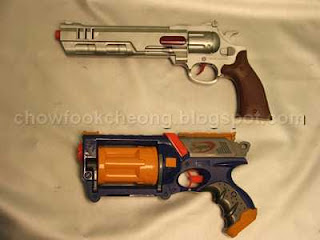 Compared to the NERF knock-off, its huge.
Slim but huge