After reading about this project, I decided to try it as well. This was because whenever I wanted to take some photos, I had to struggle to put the black felt or paper background on top of a lot of junk in the room. And then there is the problem of lighting up the model as well. And since my Office is next to the hardware shop, why the heck not?

Yeah, that was bad thinking. You see, by now you would have realised that most of my project either failed (as in it came out the wrong way) or is being delayed (until I have more money and more time, that is). So, this project, did not turn out the way I wanted it to be. For one, it was way too big. I was not sure if its the late nights or the TV but at that moment in time, the idea of three feet by three feet was just seemed right. (It should have been two and a half feet by two and a half feet) The frame is already starting to sag under its own weight. Maybe I should start to glue them sometime soon.

The thing is still sitting there after more than a month since I have yet to locate a nice wooden base and every few days, Kristine would come over and knock it a bit. And then, it would all start to fall apart.

Phase two (next month, due to budget)
3ft. square wooden base Need to find this
1x Backdrop Forgot (I bought this years ago)
4x 20mm brackets to hold the base RM2.40 (I think)
2x DIY Lights Could be another RM50 or so 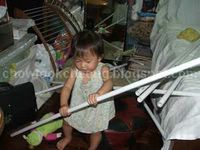 Kristine is trying to be the next Star Wars Kid
Or is it Darth Maul? 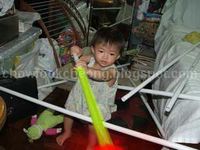 Urgh! She hit me with her lightsaber!

OK, the measurements are here
Check it first since I did this at 3AM in the morning
with the free Sketchup software 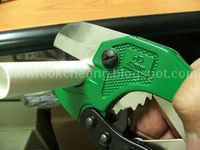 This is THE tool to cut these PVC pipes!
No more saws! I call this The Bobbit 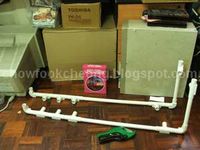 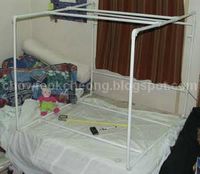 OK, so far, this is how it turned out.
My itty bitty SE T630 mobile phone there for scale
Its too big!!!